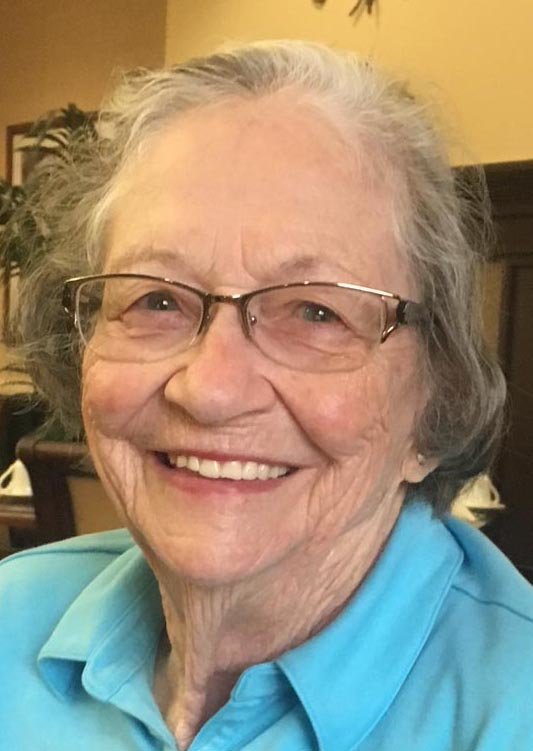 Virginia Arlene (Rube) Stockton, 90, succumbed to congestive heart failure at 7:12 a.m. Tuesday, January 26, 2021, in Camarillo, California.
Virginia was born at the Rube farmhouse in Lee County near Argyle, Iowa on March 2, 1930, the third daughter of John Herman Rube and Vivian Brodsky Rube. She attended school in Argyle, graduated in 1948, and worked as a bookkeeper for Singer Sewing Machine Company before procuring a job as a nurses aide at Graham Hospital in Keokuk. At a square dance in Charleston, she met a “good-looking Air Force guy” home on leave, who turned out to be an older brother of a classmate. Although she had never met Lyle Edward Stockton, she knew the Stockton family; she was a classmate of Lyle’s brother Gerry, and his youngest brother Fritz was in elementary school with her younger brothers, Wayne and Stanley. The two corresponded and talked by phone until Lyle came home for the funeral of an uncle, and they decided they wanted a life together. Lyle finally convinced Virginia to take a train to Seattle, where they were married September 10, 1949, at the base chapel in Tacoma, Washington.
Virginia and Lyle welcomed two daughters, Julienne Claire in 1950, and Janet Ellen in 1952, before he was transferred to Shreveport, Louisiana. There, in 1955, their first son, Thomas Lyle was born. They lived in Louisiana until their transfer to Roswell, New Mexico, where their second son, Edward Joseph was born in 1959. Their youngest son, John Carl, was born in Omaha, Nebraska in 1965. Virginia and Lyle traveled back to rural Lee County after Lyle’s retirement in 1974, and began the long process of repairing and rebuilding the Rube family farmhouse they purchased. They lived there quite happily, welcoming family and friends to the farm, and visiting far and wide in their motorhome. They were active members of Embury Church, Donnellson American Legion, and the Lee County Cattlemen’s Association. This ended abruptly in December, 2000, when Lyle passed away in his sleep. Virginia remained on the farm, with the support of her friends and neighbors, for two years until she relocated to Hamilton, Missouri, where she was a member of Emmanuel United Methodist Church in Keokuk, and later to Olathe, Kansas.
Virginia relocated to California in 2010, and enjoyed an active life with family and friends until a few months before her death. Survivors include her brother Wayne Herman Rube of Primrose, IA, her sister-in-laws Betty Jean Stockton, of Blue Springs, MO, Tomoko Stockton, of Pearl City, HI, and Sharon Stockton, of Owatonna, MN, her five children and their spouses, Julienne and Mike Mitchell of Camarillo, CA, Tom Miller and Janet Stockton-Miller of Nuevo, CA, Thomas and Miriam Stockton of Erie, CO, Edward Stockton and Karla Seyb-Stockton of Escondido, CA, and John and Kristi Stockton, of Leewood, KS, 12 grandchildren, and 16 great grandchildren, and scores of nieces and nephews and great nieces and nephews who she adored.
Virginia was preceded in death by parents and sisters Dolores Maxine Rube Sanders and Delphia Mae Rube Leazer, and her brother Stanley Ellsworth Rube, as well as her husband of 51 years, Lyle Edward Stockton.
A celebration of life service will be held at 10:30 a.m. Friday, September 10, 2021, at Embury United Methodist Church in rural Donnellson, with Reverend Kayla Carney officiating.
Burial will be at the Embury Cemetery in rural Donnellson following the service.
A memorial has been established in her name at the American Heart Association.
Online condolences may be made to the family atwww.schmitzfuneralhomes.com. Schmitz Funeral Home of Donnellson is assisting the family with arrangements.