Sipping coming back to Hesse Building 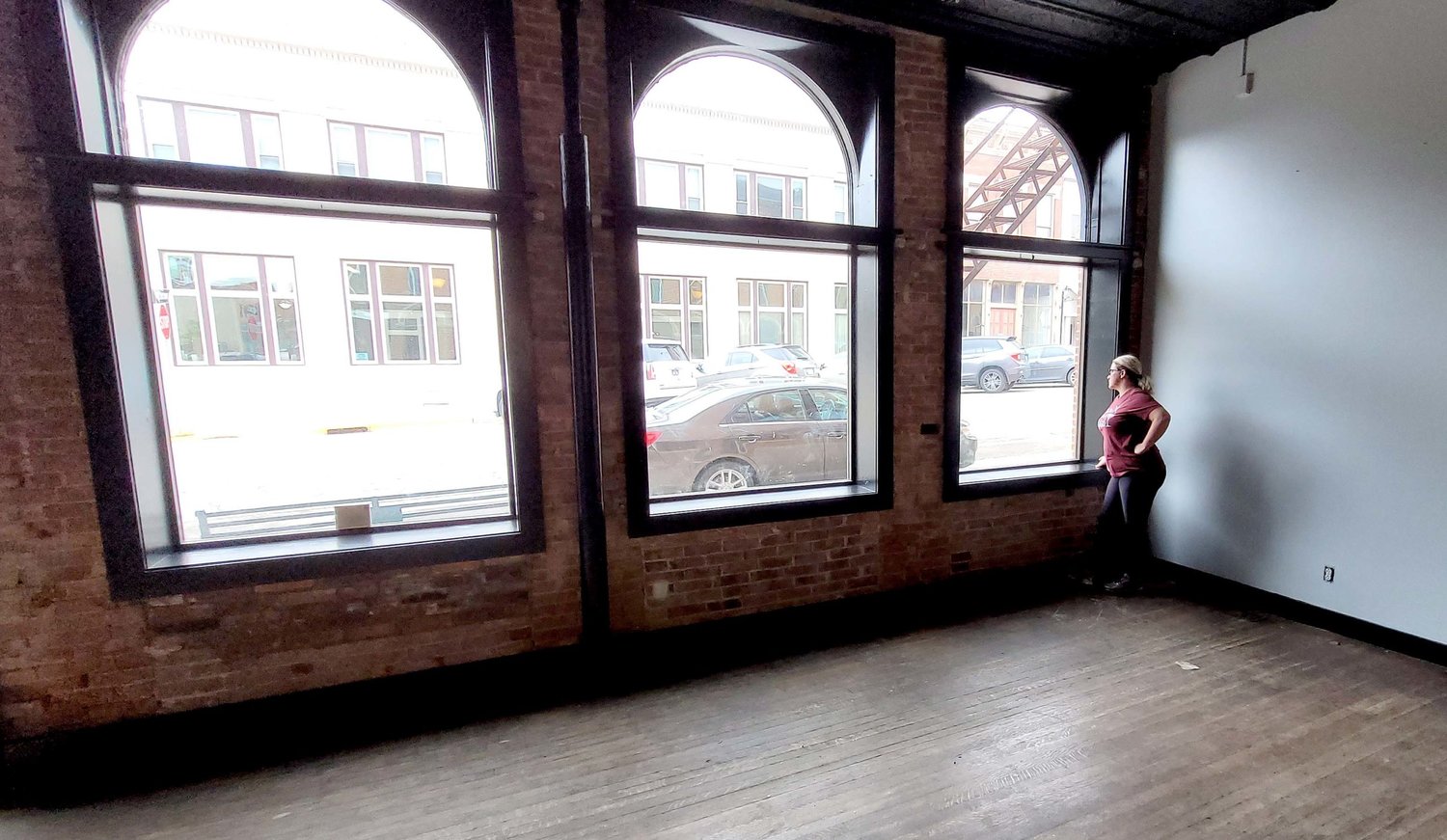 Angela Hedges looks out the windows at her new location in the Hesse Building at 7th and Avenue G in Fort Madison. Hedges is planning to open Corks and Barrels in July downtown. Photo by Chuck Vandenberg/PCC
Posted Tuesday, June 1, 2021 2:36 pm

The building is home to the Harvestville Mercantile and has been home to several other niche businesses looking to capitalize on the foot traffic on Avenue G.

But many businesses have come and gone including the popular Ivy Bake Shoppe, Sip, and Tacos, Tacos, Takos.

Starting this summer, the corner shop and outdoor patio at the building located on the northeast corner of 7th and Avenue G, will be the home of a wine and whiskey bar called Corks and Barrels.

Angela Hedges, the owner of Corked 101 in Burlington, is currently doing some rehabilitation in the historic building's first floor south retail space.

Hedges said she was encouraged by several people in Fort Madison to open a second location and decided to take the leap.

Now Hedges is having the inside painted and is cleaning and refinishing the old wood floors and a very large mirrored cabinet that's been part of all the past businesses in the storefront. A screened in porch on the south side of the building will also be a part of the ambience.

"I'm actually going to be in both those places. We'll have the screened in porch and what used to be the regular dining area," Hedges said.

But she said she wanted the Fort Madison location to be a bit different than the Burlington location, which is also in a former Ivy Bake Shoppe location.

"I wanted it to be a little different, so I decided to make it into a whiskey and wine bar," she said.

"We will have a higher end wine menu that will be part of it eventually, but I want to find the small market wines and then we'll have select whiskeys, beer, and yeah, we'll have the Iowa favorite Busch Light. It's my 22-year-old's favorite so I promised to always have a cold beer for him."

Hedges said she wanted to create a space where people could just come and sip socially.

"I just wanted to create a space like we did in Burlington. It doesn't matter if you want to sit with your husband at the bar or meet a girlfriend or friend for a private conversation on a couch. It will be a great place for both."

She also wants to create events like she has in Burlington now where wines are paired by local chefs with meal spreads.

Hedges, who's a critical care nurse by profession, said when she travels she loves to visit downtowns and that's where she got her desire to open a business.

"Every great town has a great downtown. I love the downtowns and love to see them grow," she said.

"When we vacation we go out of our way to look for those. They are the charm of the community. When Major Oak moved to Fort Madison that piqued my interest," she said.

"Then when we started talking about it, and the community really embraced us. We're so excited and I think if you have that attitude your downtown is going to take off. And that's what's happening in Fort Madison."

She said the timing is for Corks and Barrels to be open by mid to end July, and the timing should coincide with other increased activity downtown including the return of American Cruise line dockings.

The cruise lines are still planning more than 30 stops in Fort Madison despite the late start due to the pandemic. City officials have also heard that Viking Cruise Lines could be busing passengers down to Fort Madison as part of that line's Burlington stops.

The Amtrak rail depot could also be operational by then in Riverview Park which could eventually help bring people into the historic downtown district.

"Those things will help drive and keep these businesses open," she said.

The announcement comes as Fort Madison has seen several other food and drink specialty locations pop up downtown. Riverside Nutrition, Major Oak Restaurant and Swed Coffee are just a few of the new places that add to the unique collection of businesses now functioning downtown.

"The downtown there has so much potential. It's so cute and they're finding people with good business plans that fit niches that aren't already there. We've got unique things so people have an experience and can go from shop to shop and no one's really in competition with each other."