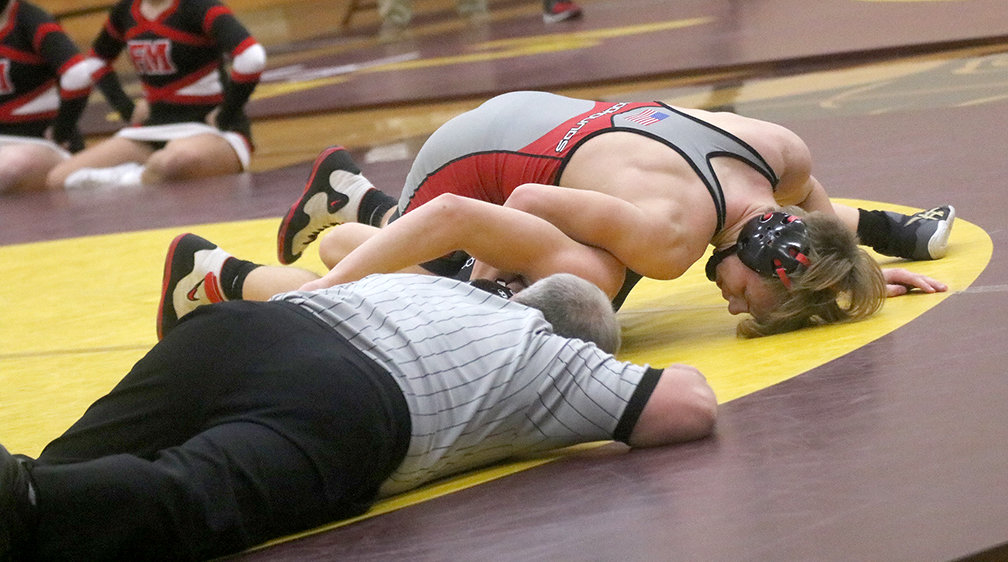 FARGO, N.D. - Anyone watching Fort Madison freshman Teague Smith wrestle knows a few things about his approach on the mat.

Just go out and battle whomever is standing across from him.

Smith did that last weekend when he went four rounds with some of the best wrestlers in the country at the USA Marine Corp. 16U Nationals in Fargo, North Dakota.

Smith qualified for the nationals in May at the state freestyle meet at 170 pounds. He wrestled at 152 last winter for the Bloodhounds varsity squad where he finished 5th at districts.

Although Smith went 2-2 on the weekend. He quickly got to the round of 32 with wins over Arkansas' Mason Nguyen in a 10-0 tech fall in just :47, and then scored a pin in the next round over Brayden Tincher out of Indiana at 2:41.

"I didn't know who I was going to be up against until I got on the mat. I didn't care. I just asked what color singlet I'd be wearing and just went out there and battled against everyone," Smith said.

The tournament was a freestyle tournament that Smith said provides quicker points and matches. Freestyle matches typically go two 2-minute rounds with a :30 break. Points are scored quicker depending on the execution of take downs, not just the take down itself. When there is a 10-point lead at any point, a technical fall is declared and the match is over.

"It's more like the Olympic style, like what the other countries do," Smith said Wednesday. "There are lots more points scored and quicker matches."

Smith ran into the top folkstyle wrestler, which is the more traditional high school/collegiate wrestling in the 16 and under group in Florida's Brian Burburija and lost by fall in the 2nd round moving him to the consolation bracket. There Oklahoma's Braden Brown ended Smith's weekend with a tech fall at 2:27.

Smith wasn't frustrated with his performance at the event and said competing at events like this helps make him a more well-rounded wrestler.

"The different styles help each other. Learning to wrestle one style, helps you with the other styles so it's good go to tournaments like this," Smith said. "It also changes things up so you don't get bored."

Wrestling is rich in Smith's family with his father, and high school coach Ryan Smith, wrestling for legendary University of Iowa coach Dan Gable. But Teague said his father takes a supporting role in his wrestling career and doesn't pilot the ship. Teague said it was his choice to wrestle in the Freestyle nationals.

"Everything is up to me and what I want to do," he said. "I go to him about things, but he doesn't force me to do what I don't want to do. He's always been willing to do whatever I need, and want, to do with wrestling."

Smith also wanted to put on some weight and wrestle a bit heavier than he did during the high school season.

"I was under a couple pounds at state to qualify so I wasn't at full 170, but when I got to nationals I was about 10 pounds heavier. I wasn't trying to cut weight, actually I hit the weights pretty harder and felt a lot stronger when I got on the mat.

"I felt a lot stronger against those kids and more confident in myself. Being bigger than the other guys helps," Smith said with a laugh.

He said he will take a break now as football season gears up with summer workouts. Smith got time as a running back and linebacker last year as a freshman with the varsity squad and is hoping to build on that success this year for the Bloodhounds.