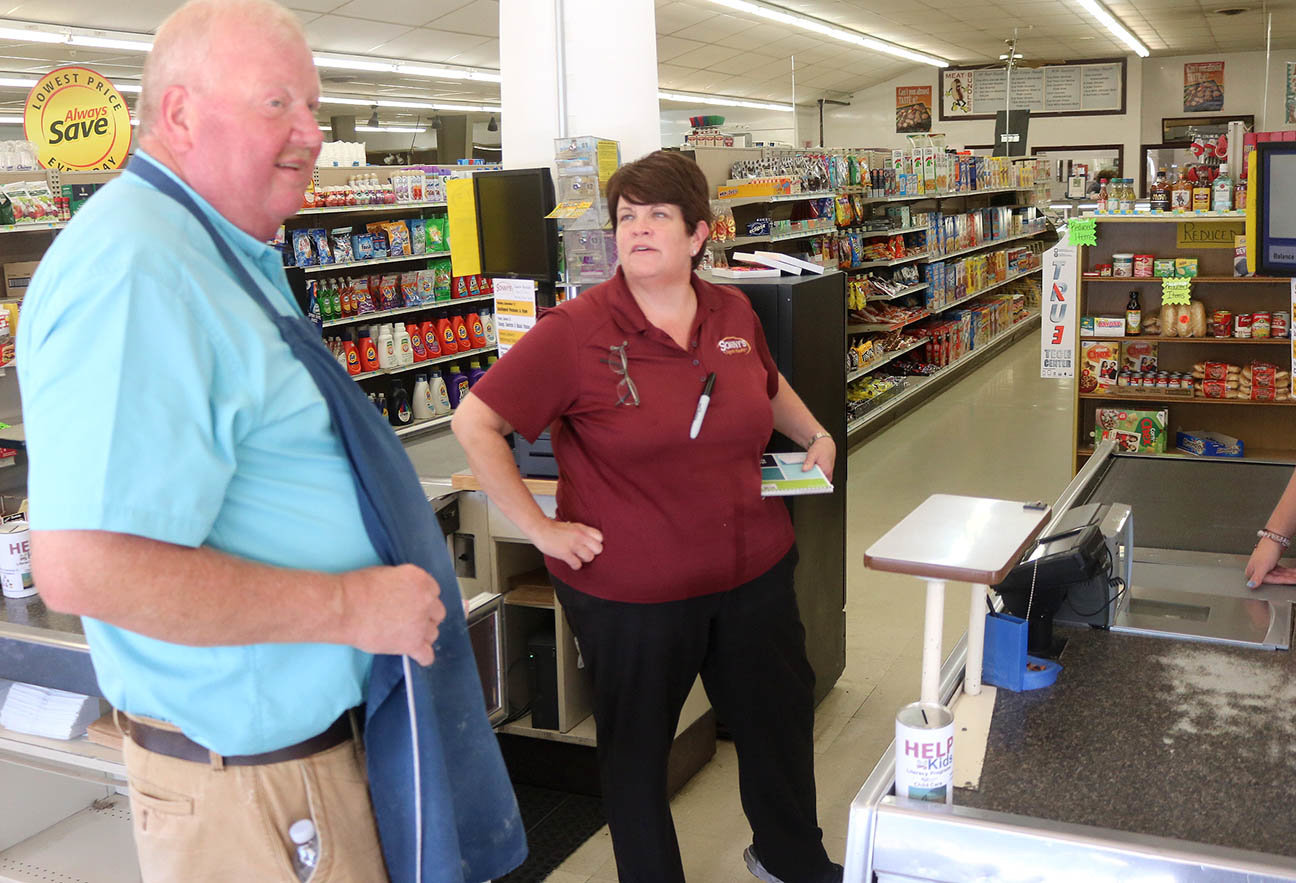 Dale and Deina Merschbrock discuss business at Sonny’s Supermarket in West Point Tuesday afternoon. The supermarket is bucking a trend where online and small chain grocery shopping is hampering the viability of the neighborhood grocery. Photo by Chuck Vandenberg/PCC
Posted Wednesday, September 29, 2021 6:31 am

Merschbrocks closing in on a decade operating the West Point grocery

WEST POINT - The economic climate hasn't been good for the neighborhood grocery.

Despite the uptick in sales at grocery stores during the COVID pandemic with restaurants and bars closed down for an extended period and people hunkered in at home, maintaining a grocery in rural Iowa towns is a challenge.

Small box stores like Dollar General and Family Dollar, as well as neighborhood convenience stores like Casey's, popping up like native flowers along the state's highways, have pinched the family-owned grocery store.

Except for the one in West Point.

Deina Merschbrock and her husband Dale have owned Sonny's Supermarket on the northeast corner of the square in West Point for almost 10 years after buying the business from Jay Fraise, son of founder Sonny Fraise, in 2012. Fraise opened the store in 1946.

Since that time, they've established a very unique niche and a loyal customer base at the familiar brown brick building with the maroon canopy that takes up about 1/3 of the eastern side of the West Point square.

A recent report in the Des Moines Register focused on small groceries that couldn't to stay afloat because of the influx of the dollar stores and convenience stores selling small scale grocery items as well as online shopping and delivery services.

Merschbrock said community commitment is what has been the driving force behind Sonny's success in a town of less than 1,000.

"It began as an investment and it grew into pride. There are certain things that small towns need, but as small as West Point is, we have it all," she said.

"But every business has to be invested in the community. Whether it's showing up to volunteer working a shift, or helping organize an event - that's what we knew we needed to do. You can't be a body builder, win a competition, and then stop and think you'll hold onto your body."

Merschbrock and her husband were both employees at Crystal Ice, a consumer ice company on the town's north side. Deina's father, Dennis, founded the company and then eventually sold it to Arctic Ice out of Canada. Deina said during that transition, she didn't feel secure in retaining her position with the company. Dale also agreed that it may be time for a change.

So the two left the ice company, Deina calling herself one of the "ice kids", and jumped into the grocery business after a conversation with Jay.

The two have been West Point's neighborhood grocers from that point on, volunteering with special events in the town like the Sweet Corn Festival, and being members of the West Point Club.

The two have a staff of about 16 and Deina said training involves heavy customer service and creating an environment that brings people back even if it's just once a month.

"More than anything we try to give the customer what they deserve. Whether they are a daily customer, a weekly customer, or a monthly customer we try to make sure we appreciate every foot that comes in the door," she said.

"That's another of the crazy things again about Sonny's. When I train people I ask them how many hands they have. They say two and I say well then if they have more than two bags of groceries we're carrying them out.

"I don't care what they say, I tell the staff they can blame me, but we're carrying out their groceries. Again maybe it's one of those things that we can be proud of."

Deina said from a retail perspective, the store did very well during COVID because of people needing to be in the home more.

She even opened the store on Sundays to allow families to have time to shop when someone could stay home with the kids.

"We thought, what can we do to help and we decided to open our doors and be accommodating. We didn't put arrows up and down the aisles, we just asked people to be respectful of others and if they weren't comfortable coming in, we understood and respected that."

When Dollar General opened several years ago, she said at first she thought that would have a heavy impact on Sonny's sales.

"I tried not to have a negative attitude. It was more of a fear of the unknown and I kept thinking about that," she said.

"And then one day before they had even opened I thought, 'you know, maybe this isn't completely bad. Some people would make the nine-mile drive to Dollar General in Fort Madison, well maybe now it keeps them in town and they stop in here to pick up a few things, as well'."

Merschbrock said she was making too much of the competition because the ratio of grocery in those stores is relatively small compared to Sonny's.

She said the fact that her meat counter is prepared on-site rather than coming in prepackaged is a strong selling point with repeat customers. People who get their meats at Sonny's know it's produced and cut right on-site.

"We even know how thick some people want their bologna sliced," Merschbrock said. "That creates a loyalty and a customer relationship here that you can't get at the bigger stores and box stores."

Deina said she's tinkered with different ideas and continues to look at what customers react to. One of those was bringing in Chester Fried Chicken and providing hot lunches from a commercial kitchen. They also do Friday lunch sidewalk cookouts.

In a world where you can really skip grocery stores altogether, Merschbrock said she and Dale continually work to create an experience in shopping and providing more of what regular customers would look for in a 21st century neighborhood grocery.

"We serve lunch every day of the week and Fridays we cook out on the sidewalk. The challenge is finding what you want to make and getting it ready and out on social media for people to see," she said.

She says when she has tough days she goes into her office and shuts the door and tells herself, "Deina, you sold people frozen water, you can do this."

The grocery also has an event center on the south side of the building where events and meetings can be held, just another way for Sonny's to stay relevant in the small community. The other side used to be a flower store and apothecary. Merschbrock said it seats about 100 and food can be prepared on-site for lunches or dinners.

John's Grocery in Farmington recently closed after the owners couldn't find anyone interested in taking the business over. Merschbrock said she hopes that doesn't happen to Sonny's.

"That would break my heart," she said.