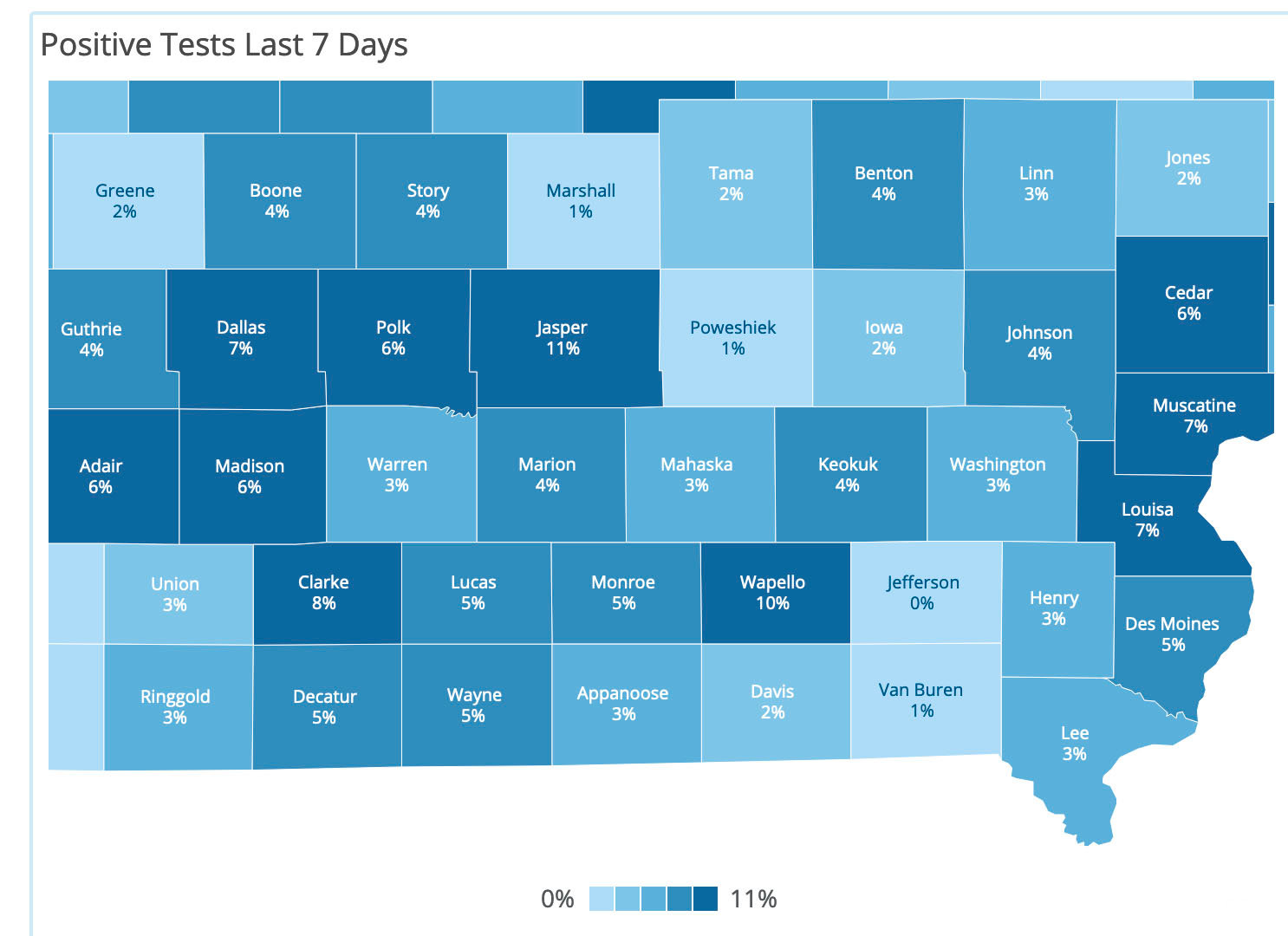 Lee County's 7-day positivity rate based on total COVID tests given in the county, and not anymore on individuals tested, stands at 3% as of Wednesday. Image courtesy of IDPH
Posted Wednesday, February 24, 2021 2:43 pm

According the Iowa Department of Public Health's coronavirus.iowa.gov website, the 14-day and 7-day positivity rates are now both under 5% at just 4.3% and 4.1% statewide. Lee County's 7-day rate is at 3%.

However the state is now reporting those percentages measured against all COVID tests administered, not individual tests, which almost doubled the figures used against the positive tests.

The new calculations show an overall positivity rate of 10.4%, and will also impact the 14-day and 7-day reporting.

Lee County Health Department Administrator Michele Ross said LCHD has given at least one dose to 1,400 adults 65 and older off a list of about 3,800.

The county has also given close to the same amount of vaccines to individuals in the first tier of Phase 1B including first responders, educators and child care workers.

LCHD volunteers and staff held clinics during the past week in the county, the largest of which was at First Baptist Church in Fort Madison where 400 first-dose vaccines were given to those 65 and older.

Ross said she's aware that people are getting inpatient for the vaccine, but the county is calling and scheduling as many appointments as supplies will allow.

"We ask for continued patience as we can only work as fast as we receive vaccine, and we schedule appointments around the number of doses on hand," Ross said Wednesday.

"Many people are very concerned they have not been called back yet as it has been a few weeks since they called.  We want to acknowledge the long wait and hope people understand we will get to you as soon as we can and that we are coordinating clinics around vaccine supplies received each week. "

She said if anyone currently on the list has access to a vaccine through another provider they should take that opportunity and then contact LCHD to be removed from the list so others can be moved up.

A closed, appointment-only drive-thru clinic will be held Thursday starting in the morning in the parking lot of First Christian Church in Keokuk, specifically for those 65 and older from the LCHD call back list.

Friday vaccinations will focus on Tier 1 eligible child care workers in the county. Next week there will be two large scale clinics in Fort Madison at the former ISP parking lot for second dosing of those vaccinated at the same location on Feb. 2 and 4th.

First dose appointments will start being scheduled again Wednesday next week based on vaccinations shipment information from the state.

Counties in the state are still under an 80% efficiency mandate from the state and Ross said LCHD continues to work with the two hospitals to meet that standard. She said by doing so the county will continue to receive it's standard shipment of 500 doses per week.

She didn't want to guess what March shipments will look like, but federal health officials have said both Pfizer and Moderna plan to increase their production and have additional doses available in March.

A single-dose Johnson & Johnson vaccine is also close to getting FDA emergency use authorization that could add to states' supplies.

IDPH data shows that 5,470 Lee County residents have been vaccinated with 2,605 series started and 1,424 residents having received both shots. Lee County providers have administered 6,100 total doses.

Ross said she hopes to see vaccine numbers increase in March so other approved IDPH providers, which includes Hy-Vees in Fort Madison and Keokuk, Rashid Pharmacy in Fort Madison. could begin administering vaccines as well.

She also said she would anticipate the state activating Phase 1C when the majority of the state is finishing up 1B. That would indicate that surplus vaccines in other areas of the state could be mobilized to areas where Phase 1B is lagging to help keep the state balanced.

Who will be included in Phase 1C is still to be determined by the state, but Ross said she would anticipate those 19-65 with chronic health conditions that put them at high risk.

Ross said she encourages people to continue practicing other public health protective measures such as frequent handwashing, socially distancing when possible, wearing face masks when in public outside your own home, and staying home when ill.

She also encouraged continued testing when necessary and following the isolation and quarantine guidance from the Centers for Disease Control.