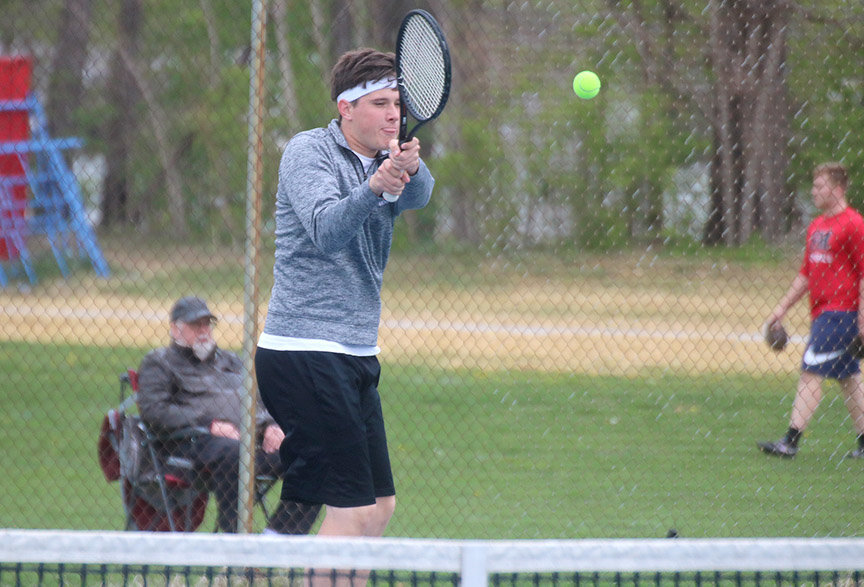 Jason Thurman returns a shot in a match earlier this season. Thurman and brother Vasin Thurman won the SEC doubles tourney Thursday in Fort Madison. Photo by Chuck Vandenberg/PCC
Posted Saturday, May 8, 2021 11:33 am

The No. 1 seniors dropped one game to Mt. Pleasant's Jack Schimmelpfennig and Owen Vansickle and then rolled Keokuk's Callum Tackes and Kaiden Stoneking 6-1, 6-1 to take the title.

The Hound twins opened play with a 6-0, 6-0 win over Burlington's Michael Mercer and Jackson Carlson, who won a play-in match over Fairfield.

Fort Madison's Levi Sissel and Bryce Workman suffered a first-round loss to Fairfield's Blake Holden and Jeremy Goodale 6-0, 6-3 to slip into the consolation bracket, where they lost in a split-set tiebreaker 1-6, 6-3 and then 5-10 in the tiebreaker to Mt. Pleasant's Jake Ensminger and Lincoln Henricksen. That loss put the Hound duo into the 7th place marathon match with Burlington's Owen Fawcett and Tyce Bertleshofer.

The Hounds won the first set 9-7 with a 7-5 set tiebreaker win, and then needed another 7-6 tiebreaker to win the second set 7-6 to earn 7th place.

Players could only play in either the doubles bracket or singles bracket.