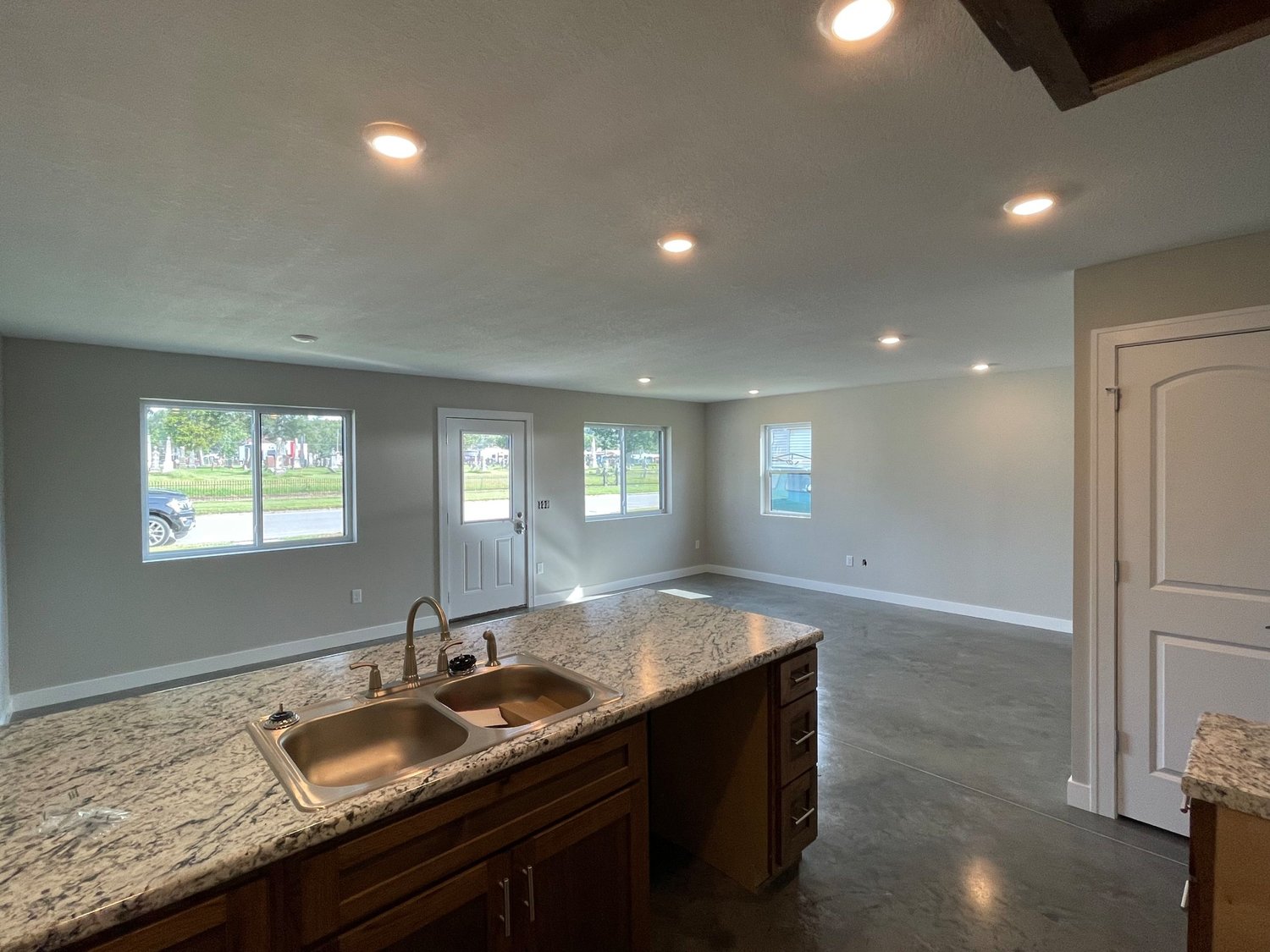 A view from the inside of the new efficient-model home built by Green Oak Development shows the large interior foot print and the view out onto Avenue H. The cement floors contain water tubes that serve as radiant heat for the all-electric home. Courtesy photo.
Posted Thursday, October 14, 2021 2:14 pm

FORT MADISON - An area veteran has a new home thanks to a new lower cost housing model that local developer Michael Mohrfeld experimented with on Avenue I just south of the City Cemetery.

Mohrfeld built, with the assistance of the Fort Madison High School building trades class, a uniquely-designed high-efficiency all-electric home at 1430 Avenue I, and then sold the unit to Charlie Chapman, a seven-year veteran of the U.S. Navy.

Chapman served stateside from 1974 to 1980 as a heavy equipment operator.

Chapman said the home is a perfect fit for the neighborhood and his lifestyle.

"I love it. It's new and all-electric, with the solar and the radiant heat. No gas at all," Chapman said.

Mohrfeld said the 960-square-foot homes would normally sell for about $90,000 before the solar panels.

"Basically, the goal was to get to that price point so we used some different design concepts," Mohrfeld said.

Jim Patrick of Building Materials designed the building for a horizontal construction strategy, which eliminated much of the sheeting that is typically used in vertical construction. He said prices on sheeting skyrocketed and this allowed the construction to be done at a significantly lower cost.

Clint Kobelt, the Building Trades program instructor at Fort Madison High School, said the project came along at a good time, when the pandemic was becoming a limiting factor in the program's curriculum.

Supply chain issues and school attendance issues threatened keeping the students away from job sites. The trade classes regularly work with Mohrfeld on framing projects at different sites in and around Fort Madison.

"Mike offered us an opportunity to do some things on a smaller scale so if we did get pulled away and have to go virtual, we weren't spread so thin," Kobelt said.

Kobelt said the ongoing partnership with Mohrfeld's development projects has kept students away from the supply chain drought and out of a more typical classroom setting.

"To Mike's credit, those haven't been a problem. We actually came here today from a couple homes we're framing over on 33rd. Without partnerships like this with Michael, this program looks a whole lot different."

Mohrfeld said the entire home is electric with a solar panel system on the roof. He said the plan for the home was to get to as close to a net-zero on electrical costs as possible. Original plans included a carport on the west side where the solar was originally planned to go, however, the solar panels now are installed on the single-pitch roof.

"Charlie put a garage on which is cool, but the original plan was to move this off-center a bit and build a carport and put the solar on that peak, but the concrete driveway to get to that car port was another $15,000. We wanted to take a swing and get below $100,000. That was the goal so we left that off," Mohrfeld said.

But he said the efficiencies of the building should result in much lower utility rates, which will yield substantial annual savings.

"It's very well-insulated and with the small square footage allows us to look at electric. And with the way Alliant net meters, we take our overproduction from the summer and it rolls forward to pay the winter electric bill," Mohrfeld said.

He sees the model as a possible transition for some neighborhoods and dilapidated properties in Fort Madison.

"We want to take this and adapt to it and adjust it along the way. We'll watch the utility closely over the winter and see that it does what we want it to." he said.

The home has a styrofoam foundation and two inches of insulation under a concrete floor. The floor has tubing running through it that will serve as the heating source.

Mohrfeld said it's a lower cost housing stock that can be replicated locally for new homes rather than purchasing remodels.

"We've been using the saying that the problem is that a $50,000 purchase in Fort Madison buys you a $75,000 remodel. This is brand new and you can move in and you're not going to be investing into it for about 15 years plus.

Kobelt said the work exposed the students in the program to different construction models and designs, as well as working side-by-side with professional trades people on a unique structure.

"These guys were afforded an opportunity to not just think outside the box, but build a different box," Kobelt said.