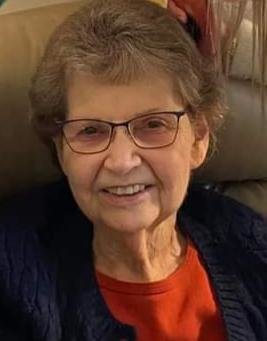 She graduated from Keokuk Senior High School in 1955 and worked for several years as a telephone operator for Northwestern Bell in Keokuk.  She was a bookkeeper for the Keokuk City Employees Credit Union from 1970-1974 and then the City Clerk’s office for 26 years, becoming the Finance Manager for the City of Keokuk until retiring in January 1999.

Doris was a member of St. Paul United Church of Christ and served as Treasurer of the Consistory, a Trustee for three years and various other committees for the church.  She was a member of P.E.O. chapter U.  Doris enjoyed bowling in her younger years and golf with the ladies of the Elk’s on Thursday mornings.  Other interests over the years included needlework, sewing, birds, and her flower garden.  Her greatest joy was family time and holiday gatherings, especially catching up with her grandsons and keeping up with her great-grandkids activities.

Doris and Don enjoyed traveling after their retirement, including trips to Europe and Hawaii. They hosted a High School Exchange Teacher in 1979 that was from Uruguay and maintained a lifetime relationship, which they cherished.

In addition to her husband, she was preceded in death by her parents and stepfather, Ernest Fickle, her daughter, Deborah Johnson, her brother, Thomas Reid, and sister, Mary Anne Roberts.

A funeral service will be held 2:00 pm, Thursday, July 28 at Vigen Memorial Home in Keokuk with Reverend Milo Van Veldhuizen officiating.  Burial will be in the Oakland Cemetery in Keokuk.

Visitation will be held one hour prior to the service from 1:00 p.m. – 2:00 p.m. with the family meeting with friends at that time.

In lieu of flowers, memorials may be made to St. Paul United Church of Christ in Keokuk, or the Arthritis Foundation, PO Box 96280, Washington, DC. 20077.