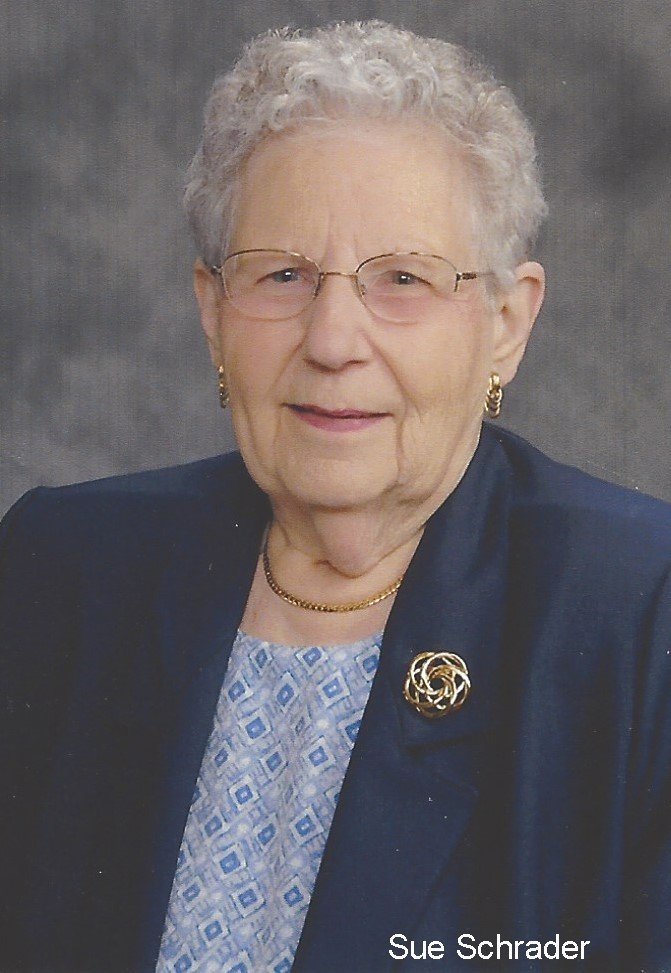 She was born on May 21, 1928 in Keokuk, IA the daughter of Donald R. and Veta Mae Thompson Gordon.    Sue graduated from the Hamilton High School with the Class of 1946.

Sue was united in marriage to Melvin W. Schrader in 1947 and he preceded her in death in 1983.

Sue and her husband Melvin owned and operated Schrader’s Store in Sutter, IL for 30 years. After the death of her husband in 1983, she moved back to Hamilton, IL.

Sue had been a member of the Bethlehem United Church of Christ in Sutter, IL since 1947.

Sue enjoyed traveling and doing volunteer work in her community.  She had been a volunteer with the Hancock County Red Cross since 1972.  She served on the Board of Directors of the Security State Bank from 1985-1994. Sue joined Chapter U. of P.E.O. in 1985.  She was a charter member of the VFW Auxiliary 5256 and a member of the Entre Nous Club. In 1990 she joined Security Stars and in 1994 she joined RSVP. She formed a grief support group in Hamilton in 2005 and helped many people deal with their grief after a death. Sue brought sunshine into the lives of all who met her and was always willing to lend a helping hand.

A graveside service will be held at 10 a.m., Saturday, May 22, 2021 at the Bethlehem United Church of Christ Cemetery in Sutter, IL with Reverend Mark Binder officiating.

There will be no visitation.

Memorials may be made to the Hickory Grove Activity Department, 404 S. Adams Carthage, IL.