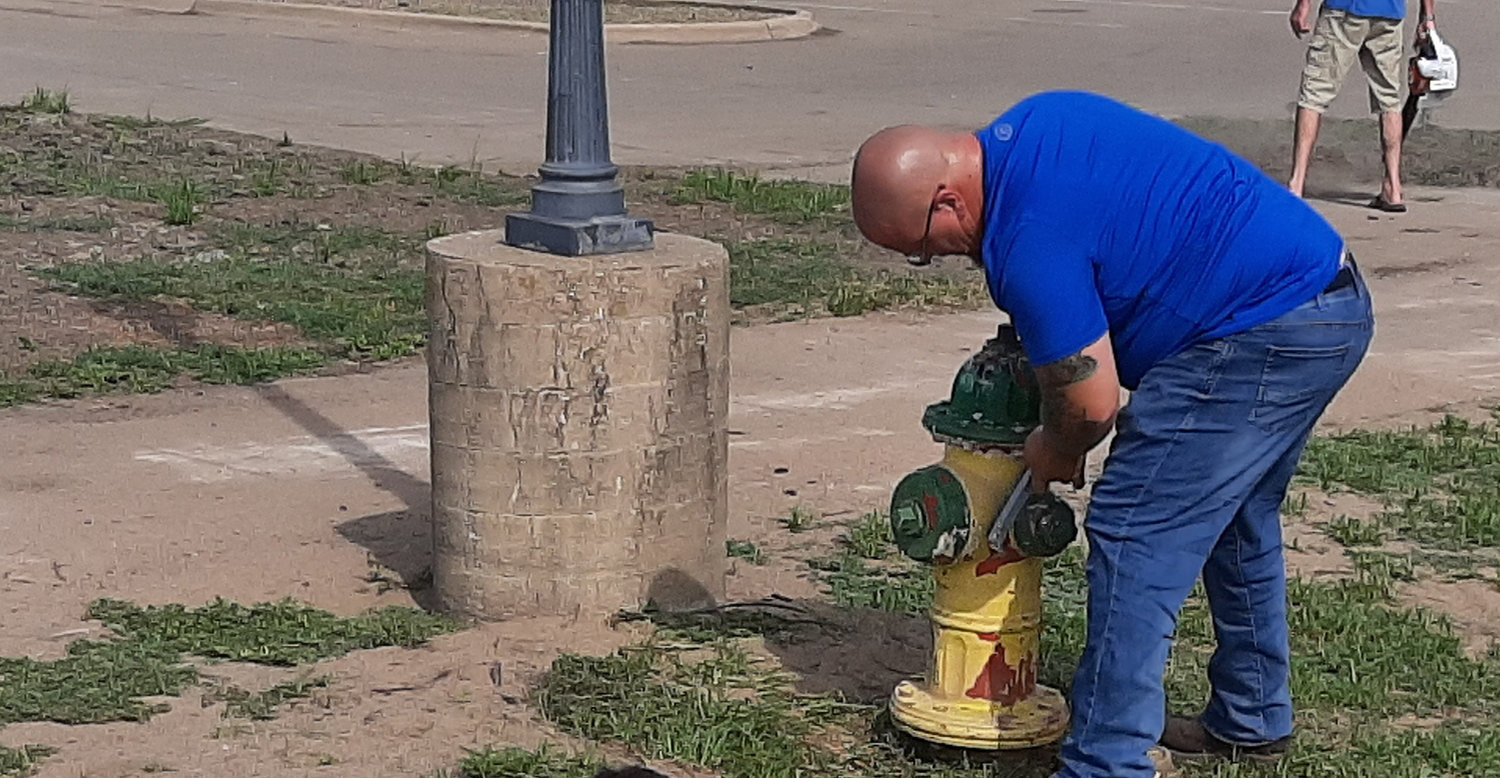 A volunteer worker scrapes the paint from a hydrant in Riverview Park Monday afternoon as part of a beautification effort in front of the inaugural American Cruise line arrivals on Tuesday. Photo by Chuck Vandenberg/PCC
Posted Monday, August 5, 2019 8:57 pm

Savanna Collier, the Fort Madison Chamber of Commerce coordinator, said she was extremely pleased with the work that was accomplished in just three hours from 9 a.m. to noon.

As a treat, American Cruise Lines, who found out about the morning clean-up session, chipped in for a BBQ lunch for the volunteers in Central Park.

"We were just thrilled that they wanted to show their appreciation for the work of the volunteers," Collier said.

She said about 50 people showed up to pick up trash, scrape, and paint city poles and fire hydrants, apply weed killer, pull weeds, mow, clean the Riverfront Pavilion, and remove litter from the shores of the Mississippi in Riverview Park near the Pier.

The first cruise ship is expected to dock on the city's pier on the western side of the park at 8 a.m. Tuesday for a six-hour stay.

Collier said about 100 passengers have signed up for one of two excursions.

"One is a historical excursion and the other will be an agri-tour and, right now, they're pretty evenly split at 49 and 50," she said.

"The rest of the people, as of right now, will do the shuttle system and visit downtown. We've contracted with Southeast Iowa Regional Planning to use SEIBUS for that and it will do a loop from the Fort to the pavillion, and to the museum and the depot, and will have two stops along Avenue G."

The cruise line has 14 stops planned in Fort Madison yet this year and will increase that to at least 30 per year going forward.

Volunteers spread out throughout Riverfront park and the downtown district throughout the morning. Collier said most of the targeted items the Chamber had listed out were accomplished. But she said she hopes it's a spark for building and business owners who saw the volunteer work being done.

" I definitely think it went well ...very well. I'm extremely pleased with everyone's hard work and this was not easy work, but it absolutely needed to be done," she said.

"My hope is that we can get everyone on board to maintain it. My fear is that it won't stick and we'll have to do it again. Hopefully people see we were out there working really hard and it will be that spark to keep things going."

Collier said the city is planning a reception for the initial cruise with Mayor Brad Randolph on hand along with the Chamber Ambassador Club, Old Fort staff in period garb, and a cannon firing. In addition, the middle school band will be on hand as will Mexican Fiesta dancers to provide some music and local culture.

A ribbon-cutting is also planned for cruise line staff. Collier said the community is welcome to come down to give the first cruise a strong Fort Madison welcome at about 9 a.m.

Going forward, Collier and Fort Madison Tourism Director Jean Peiton are working up a plan to schedule a welcoming party comprised of different groups, volunteers, and organizations to greet passengers and answer any questions they may have as they disembark.