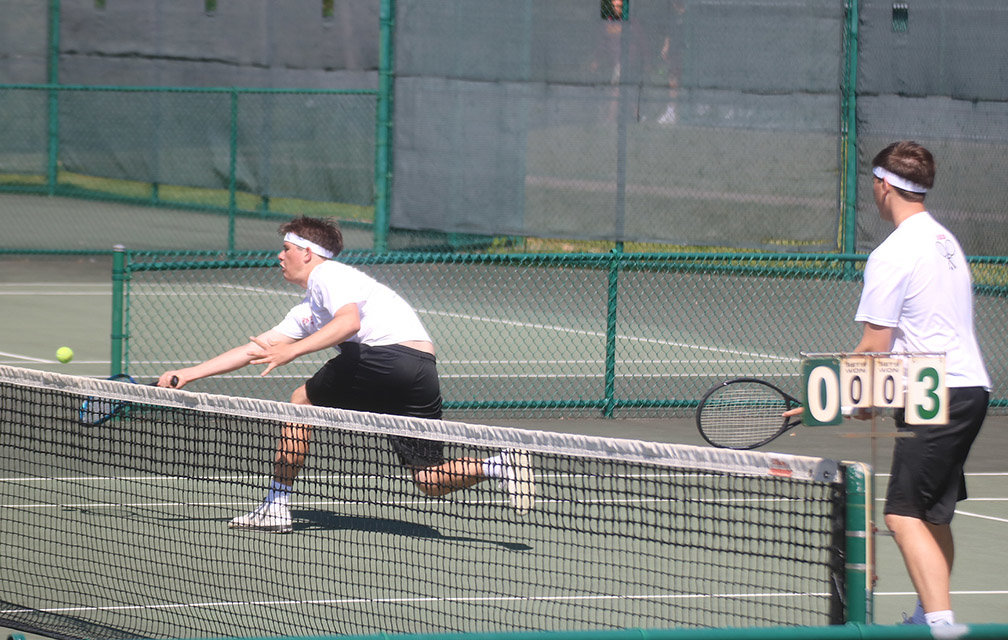 Fort Madison's Vasin Thurman chases down a volley in the second set off their match with Cedar Rapids Xavier Wednesday in Fairfield. The Thurmans took 3rd place after falling 6-1, 6-7 (2-7), 1-6 in the semis. Photo by Chuck Vandenberg/PCC
Posted Wednesday, May 12, 2021 8:01 pm

But any coach will tell you you have to beat the best to be the best.

And Fort Madison's Jason and Vasin Thurman had some of the best on the ropes Wednesday afternoon at Fairfield Middle School's tennis facility at the IHSAA Class 1A tennis districts before falling 6-1, 6-7 (2-7), 1-6 in the semifinals to top-seeded Cedar Rapids Xavier.

The two, playing as Bloodhounds in the shared program with Holy Trinity Catholic, breezed into the semifinals with identical 6-0, 6-2 wins over Keokuk's Ivan Lopez and Kaiden Stoneking, and Centerville's Reece Sells and Lucas Henderson in the first two rounds.

It looked like much of the same in semis as the Thurmans jumped all over Xavier's Declan Coe and Hugh Courter 6-1 in the first set, and then jumped out to 3-0 lead in the second set.

In the fourth game of the second set Courter was serving and the Thurmans had their sites set on breaking the junior's serve at 30-40, but Coe would take it to deuce with some net play and then Vasin would go long to give the Saints the advantage. Fort Madison would battle back to deuce on an unforced error. The teams would go back and forth at deuce until Xavier would get the game to get on the board...and take all the momentum.

Coe and Courter would win the next four games including breaking Vasin's service game at love. Coe would serve the next game giving up just one point to tie things up at 3 all.

The Thurman's would regain some composure in the seventh game with Jason serving. The teams would tie at 15 and 30, but an error at the net by Fort Madison gave Xavier its first lead of the set at 4-3.

Xavier would take the next game with Courter serving to make it 5-3, but Fort Madison would close it to 5-4 snapping the four-game rally. The Hounds would then break Coe's serve when the Saints would go long in a rally at 30-40 to tie things at 5.

Xavier would break Jason's serve to go up 6-5, but the Hounds would break back at 15-40 to set up a first-to-seven tiebreaker with the set at 6 all.

Vasin would double fault to start things off, and the Saints would reel off four straight before Fort Madison would get two straight, capped by a snappy cross-court runner by Jason Thurman going right just inside the baseline, for a 4-2 Bloodhound deficit.

The Saints would score the next three to take the tiebreaker and steal all the wind from the Thurmans' sails as the two couldn't find their way again and dropped six of the next seven games to surrender the match.

Vasin Thurman said early on the Hounds were able to take advantage of miscues from the Courter and keep the ball from Coe, who plays at No. 3 for the top-seeded Saints. Xavier's No. 1 and 2 players, Brady Horstmann and Matthew Schmit won the doubles bracket with a 6-1, 6-4 win over their teammates.

"One of their kids just took control over the other kid and started making shots and that really helped them out," Vasin said. "That ended up being what caused them to take the momentum and then they both started playing better."

Vasin said not playing last year during the pandemic made things tougher this year.

"We were hoping to place in the top 8 as juniors and then we would have had that extra season playing," he said. "This was our last chance to do that and being put up against the top team in the state, who usually isn't in our district, was too much."

Up until 2020, West Burlington/Notre Dame had a tennis squad and they traditionally would have been in the district, and Xavier would have played elsewhere. But with WB/ND not fielding a team this year, Xavier was moved into the Fairfield district.

Jason said it felt like they were playing as juniors and not seniors because of the missed year.

"If we would have had another year under our belt it would have been different. We don't play tennis all year around like them. We play three sports and don't dedicate all our time to tennis. Missing that year maybe made this year worse than we would have played as juniors," he said.

The two went on to down Centerville's Otis Williams and Corey Shondell handily 6-0, 6-1 to take 3rd place. They would make the state tournament if something were to prevent either of the Xavier teams from making the trip to Waterloo.

The loss also knocked the Hounds out of the team state tournament, instead sliding Centerville into the 3rd place team spot. Centerville and Keokuk will have a play-in prior to state to see who will be the No. 2 seed from the district.

Hogan said it was an unfortunate circumstance that WB/ND didn't have a team, and someone decided Xavier should be moved into southeast Iowa.

"Southeast Iowa got misrepresented with that. Someone on the board was able to shift teams around and Xavier got lucky to come here and out of another district," Hogan said.

"They have some talented players for sure, some of them we saw at state a couple years ago, but they should have been in another district."

Hogan said a couple of points and several double faults got to the Thurmans in the second set that could have turned the match the other way.

"I think we played the best we could. We ran out of gas and they changed their game plan. They changed their serve and then tension and nerves came about and you tense up and try to keep the ball in play and lose the strength of your stroke," Hogan said.

"I've really enjoyed the past four years, minus one, with those young men. I wish I would have had that one more year. The other players improved and gained some confidence too, but the twins had each other and spent a lot of time at the tennis court."

In other doubles action, Fort Madison's Bryce Workman and Tyler Horn were eliminated in the first round by Keokuk's Brendan Worster and Luke Thompson 6-2, 6-3.

Keokuk's Abbott Haner won the singles championship, but he had to beat both Xavier entrants Ethan Shimak in the second round, and Trenton Link in the title match to advance to the state meet.

Fort Madison's Levis Sissel beat Fairfield's Tristan Paton 6-4, 6-3 to advance to the quarters, but then fell to No. 4 seed David Nguyen of Mt. Pleasant 6-3, 6-4 to end his day.