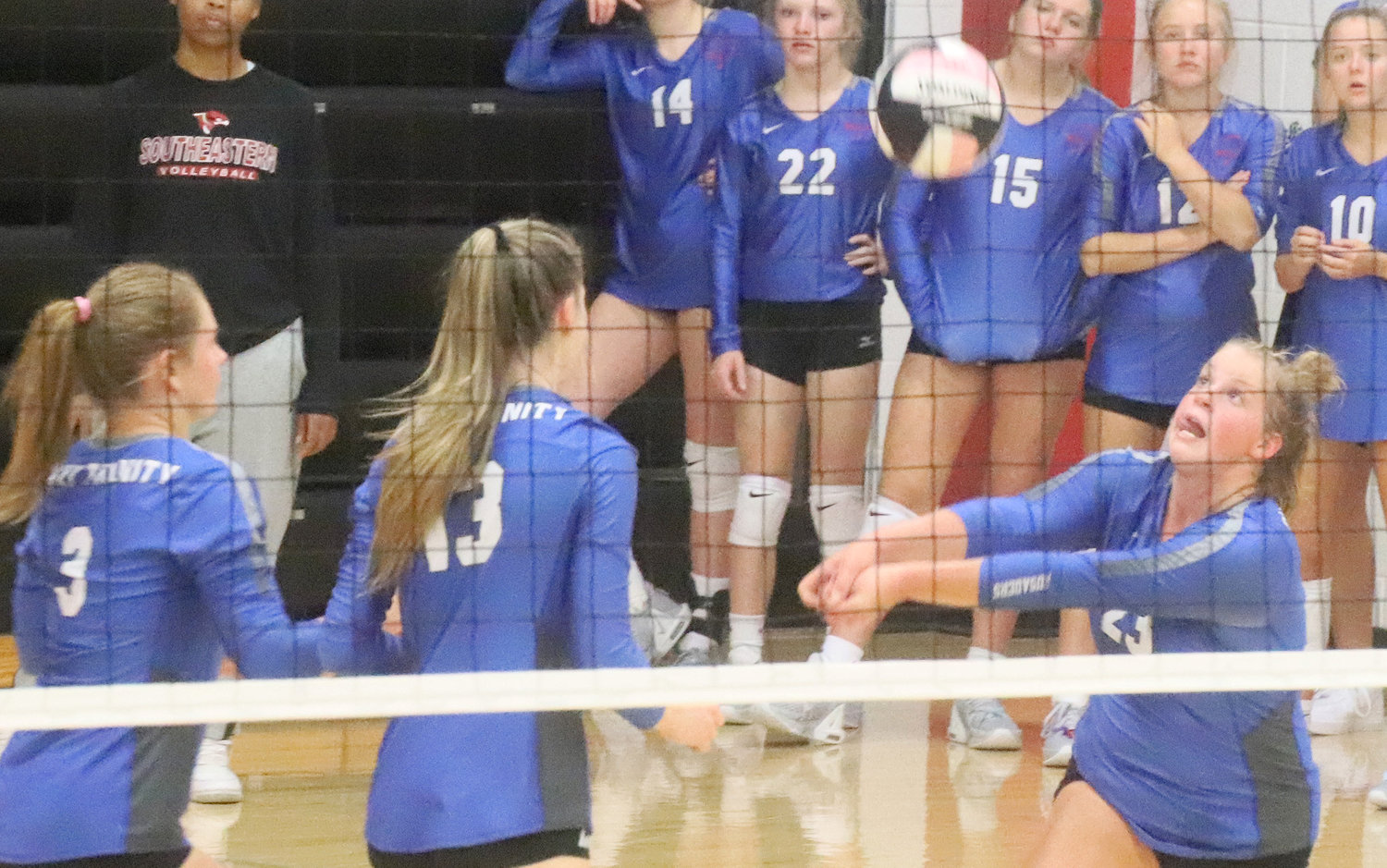 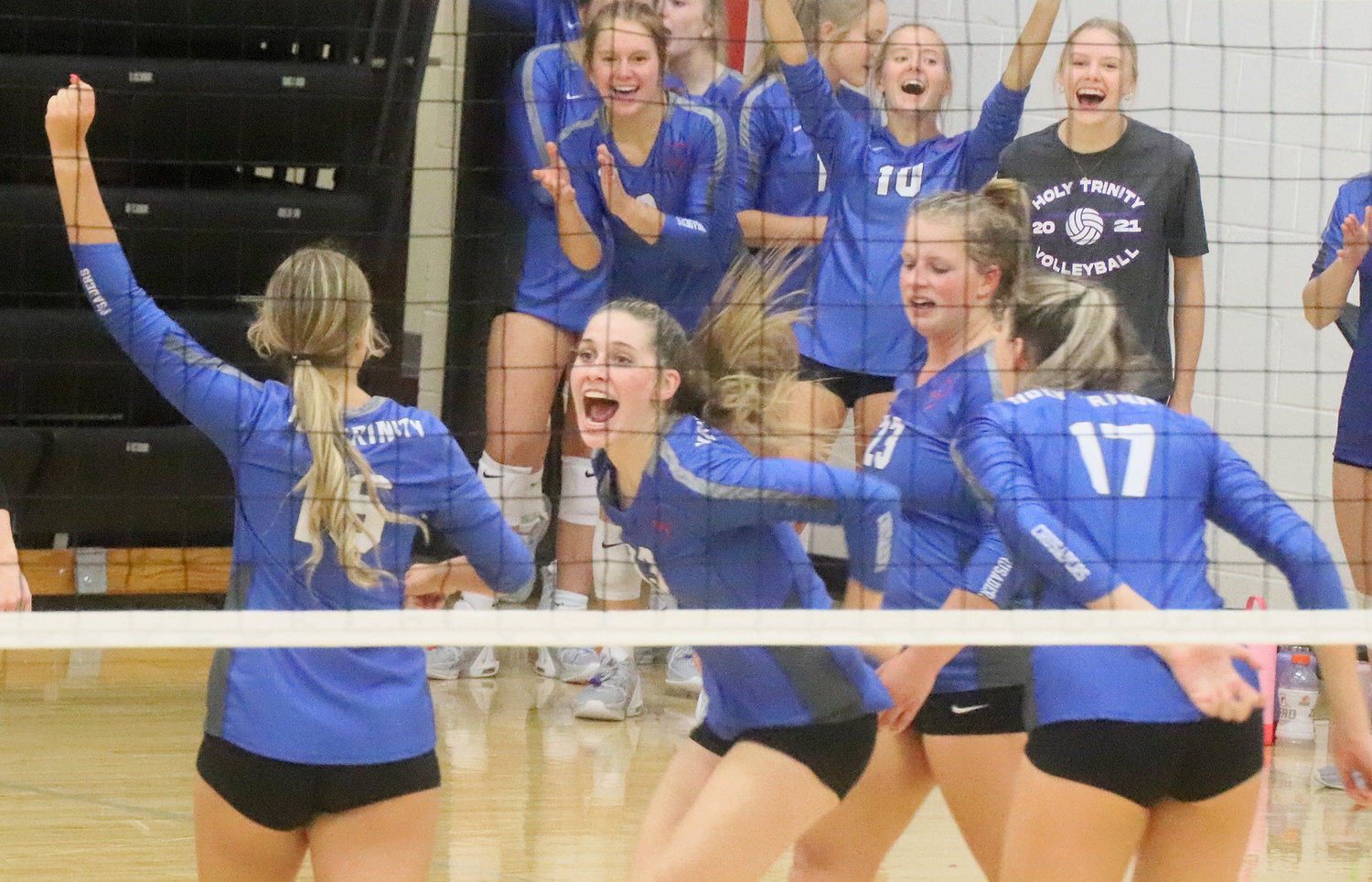 The Crusaders celebrate a tie breaker win in the third game against WACO to advance to the semifinals Saturday night in Burlington.
Photo by Chuck Vandenberg/PCC 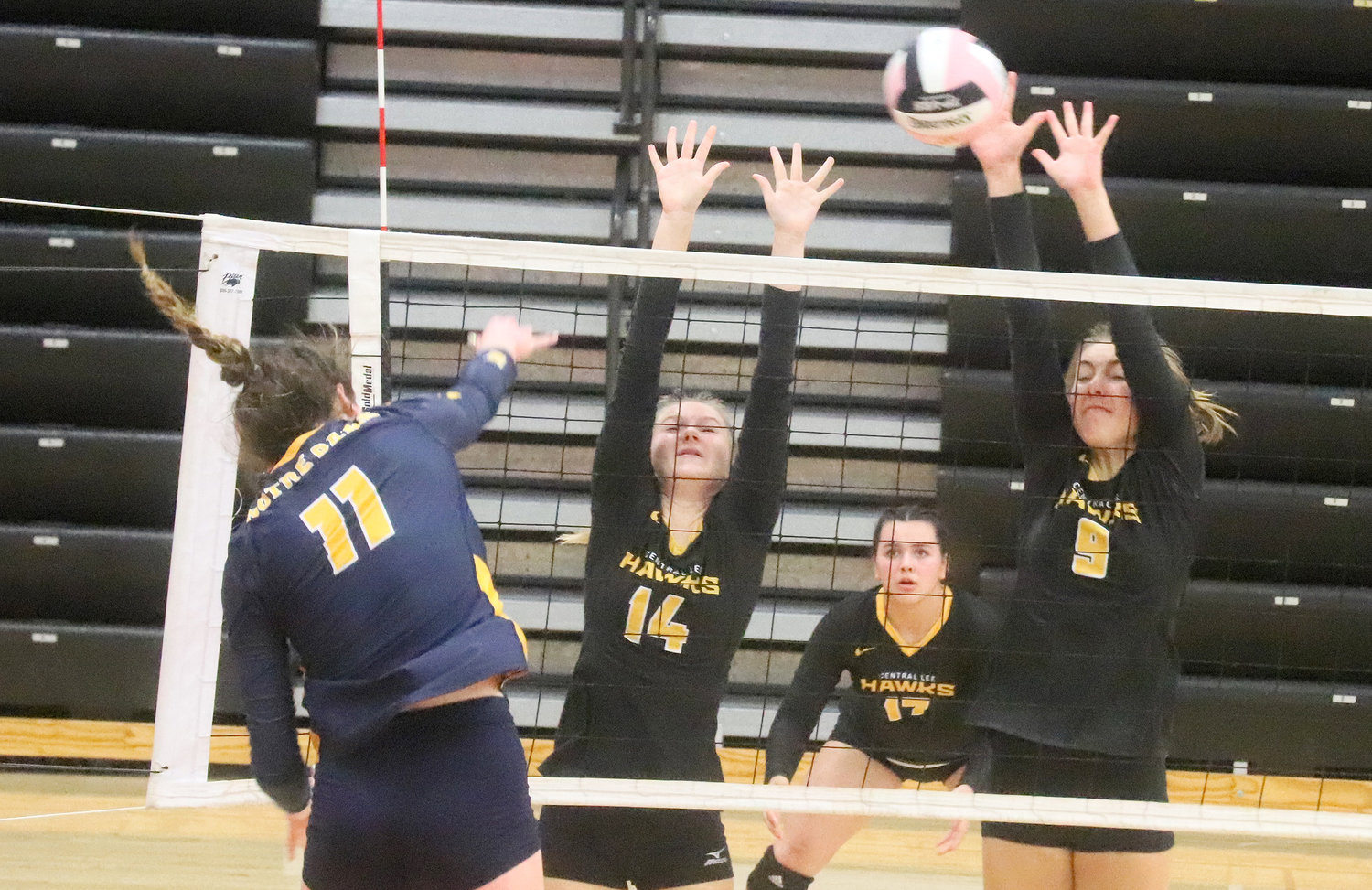 Burlington Notre Dame's Gabby Deery drives home an attack against the front defense of Mya Lampe (14) and Taylor Jones (9) in the second game Saturday at SCC.
Photo by Chuck Vandenberg/PCC
Previous Next
Posted Sunday, September 25, 2022 12:48 am

You’ve got to look at the whole. We dug some balls up and kept going. There was never a lack of hustle from us, and that’s good to see. It was a great week for us.”
Melissa Freesmeier- HTC girls volleyball Head Coach
John Bohnenkamp for Pen City Current Sports

WEST BURLINGTON — Holy Trinity’s volleyball team didn’t quite accomplish everything it wanted during its busiest week of the season.
“But it was a pretty good week,” coach Melissa Freesmeier said.
The Crusaders finished third in the SEI Superconference Tournament at Southeastern Community College on Saturday, completing a week in which they won eight of their nine matches, including the finale against rival New London, which had beaten Holy Trinity earlier in the season.
The No. 12 (Class 1A) Crusaders’ 25-19, 25-19 win over the No. 11 Tigers avenged a three-game sweep on September 1. Since then, Holy Trinity (16-8) has won 10 of its last 13 matches.
“It’s a big rivalry,” Freesmeier said. “And we owed them one.”
Freshman Presley Myers controlled the Tigers from the middle, with six kills and a block in the first game and five kills in the second game.
“Today she was a little quick to the ball,” Freesmeier said. “Once she settled in, she was tough.”
Outside hitter Mary Kate Bendlage also had 11 kills in the match and 32 on the night.
“She always comes up big for us and she did again tonight,” Freesmeier said.
Holy Trinity had to rally to even stay alive on Saturday. The Crusaders lost 27-25 in the opening game against WACO in the quarterfinals, then rallied to win the second game 25-19 and the third game 15-9.
That victory, Freesmeier said, was another sign of the Crusaders’ growth.
“Again, a few weeks ago we would have dropped that third set,” she said. “But not today.”
The Crusaders then lost in two games to No. 8 (Class 2A) West Burlington in the semifinals 25-13, 25-12
“West Burlington, against us, was on fire,” Freesmeier said. “There wasn’t a lot we could do.”
Freesmeier looked at the big picture from the three matches.
“You’ve got to look at the whole,” she said. “We dug some balls up and kept going. There was never a lack of hustle from us, and that’s good to see.
“It was a great week for us.”
Presley Myers had 25 kills on the night for the Lady Crusaders. Anna Bendlage was 21-222 serving with an ace and had 72 assists. Mary Kate Bendlage had 26 digs to lead HTC.
Central Lee was eliminated in the quarterfinals by Notre Dame 25-15, 25-11.