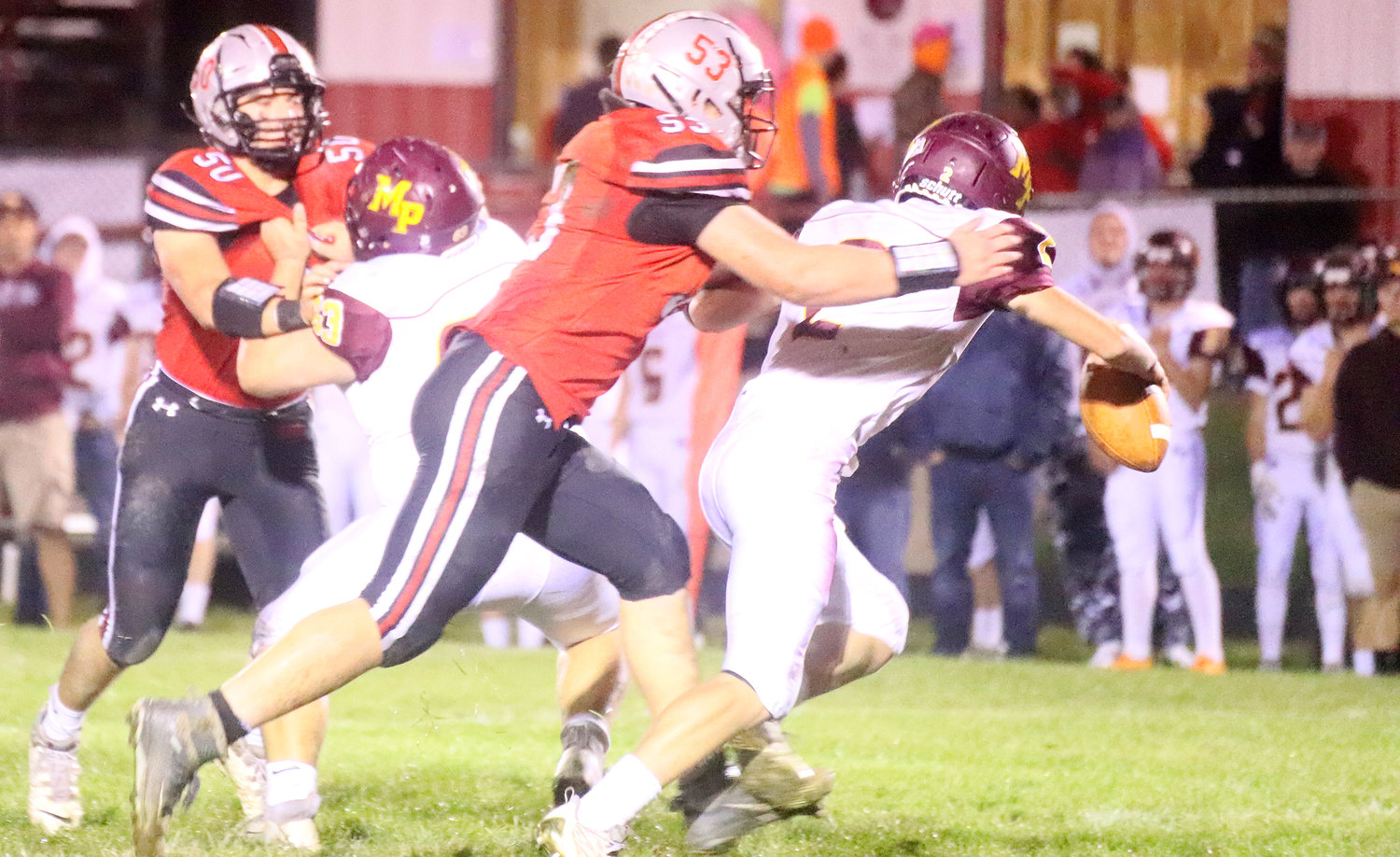 Fort Madison senior Daniel Sokolik chases down Mt. Pleasant's Jacob Richtman last week in a 46-0 win. This week the No. 10 Bloodhounds travel to Clinton to take on Addison Binnie and the River Kings.
Photo by Chuck Vandenberg/PCC
BLOODHOUND PREVIEW

You think North Scott cares about a number next to our name? You and I know the answer to that.”
Derek Doherty, FMHS Head football coach
Chuck Vandenberg, Pen City Current Editor

FORT MADISON - Senior Addison Binnie has accounted for almost 70% of Clinton's offense this year, but the Bloodhounds aren't looking at a one-dimensional team.

Head Coach Derek Doherty said during the Pen City Current preview show Wednesday that Clinton is an explosive team that plays in a tough conference.

The Hounds take on Clinton at Coan Field on Friday starting at 7:30 p.m.

"They run a lot of dual threat stuff that we also run, but this is the first time we've seen somebody live doing it," he said.

"This guy is dangerous, he's proven that he can get it done in the air and on the ground and that's a whole other animal for us to attack."

Binnie has thrown for 557 yards and rushed for another 737 on the season accounting for 15 of the River Kings' 20 offensive scores.

But Fort Madison rolled out a new defensive front last week against Mt. Pleasant going with just one defensive down lineman and was able to shut down the Panthers' Jacob Richtman who was leading the state in passing.

"We wanted to mix some things up. So Coach (Jason) Crooks  and staff came up with a good game plan. When I came over for team defense, I had no idea what we were lined up in. I'm going what in the heck.., but that's Coach Crooks at his best," he said.

The other threats for Clinton is senior Ajia Russell who's averaging just under six yards per carry with about 300 yards on the year. Junior JhiKieth McGraw is an explosive receiver averaging almost 30 yards a catch at 282 yards on the year with a 21-yard touchdown.

Binnie is also the leader in tackles for Clinton with 22.5, but getting those at the safety position says ball carriers are getting into the softer layers of the defense.

That could bode well for Bloodhound junior tailback Teague Smith who had a career night Friday against the Panthers. Smith rushed for 115 yards and two scores on just 12 carries last week.

Doherty said that could signal a change in Smith's approach to the game.

"He just gets better every single day. That's how he lives his life. He's very serious about the things he does. He's a student of the game and he takes coaching extremely well," Doherty said.

"You better be prepared to stay late if Teague's around. He will ask his questions and get all his answers. Yes, he's making different cuts now and seeing things a bit broader instead of the tunnel vision of the guy in front he needs to run over."

The Hounds' passing attack is also helping transition the run game. Senior Quarterback Aidan Boyer has thrown for more than 850 yards and 11 scores against just one pick.

But he has three receivers with more than 200 yards and Leif Boeding has over 300 with an 86-yard touchdown catch and run Friday night.

Doherty said Boyer is working with good football speed on the field.

"We don't have the Tate Johnson state track speed per se, but we have good football speed out there," he said.

"Those guys are fast and we don't have stats on it because they're soccer players and they've been out there making things happen on that field. There's a difference between speed and football speed, but they make the cuts in these other sports and it's transitioning every well."

The Hounds come into the game ranked 10th in the last AP coaches' poll and the Des Moines Register has them as high as 7th in the state in 4A.

Doherty said it's a number next to a name and it doesn't win football games.

"We have the conversations. Our most recent past experience where we crept into the rankings last year. What did that get us, we went on an 0-3 skid. I'm not saying that was the problem, but our message to our guys is that number next to the name doesn't mean anything," he said.

"It's somebody's opinion and it doesn't win you games. At the same time you don't discredit the work and let them know that other people are recognizing the good work.

"You think North Scott cares about a number next to our name? You and I know the answer to that."

For those not making the trip to Clinton, the game can be seen livestreamed at https://youtu.be/7G0qDHFMm5A
with the Pen City Current Pregame at approximately 7 p.m.