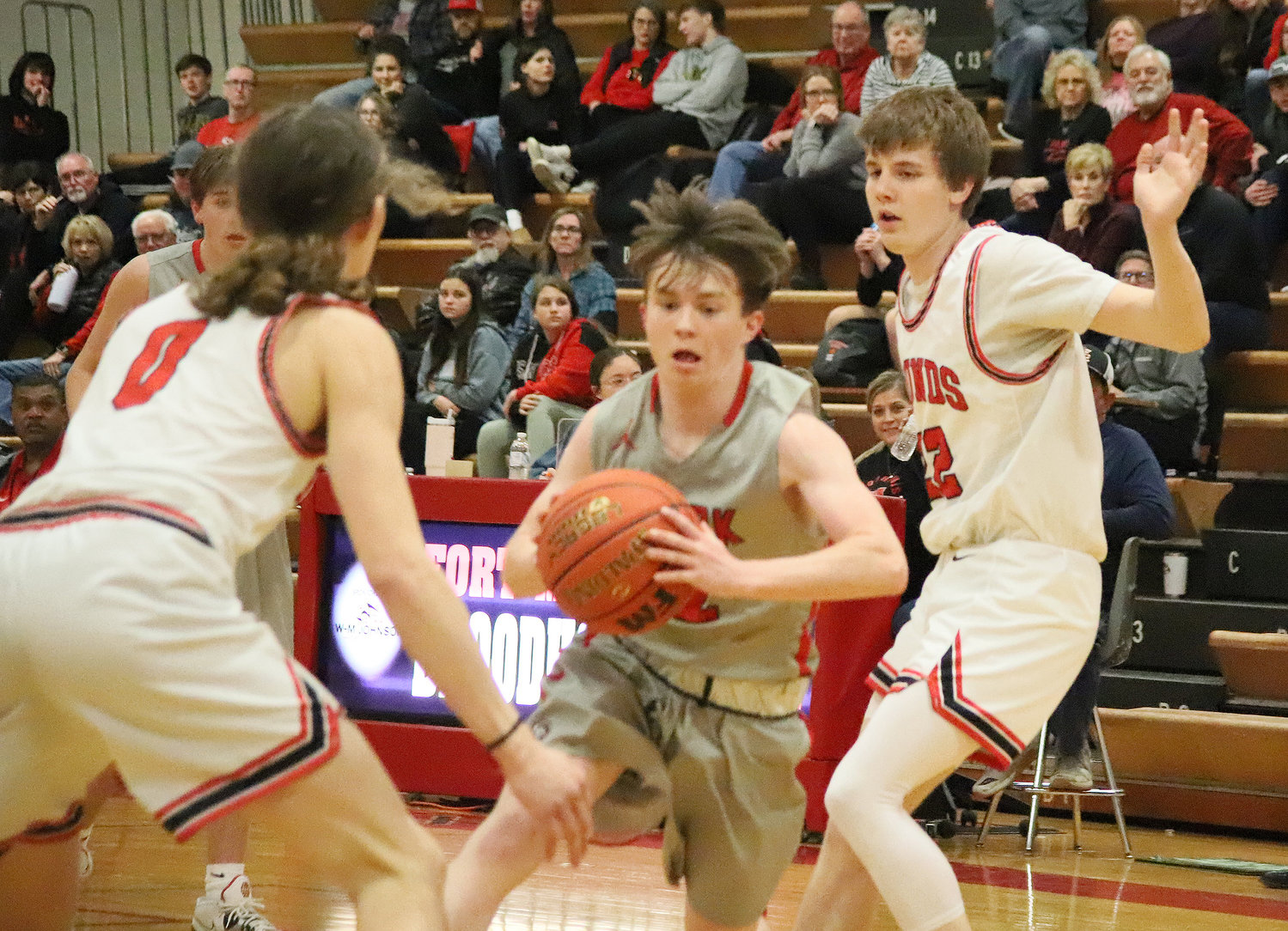 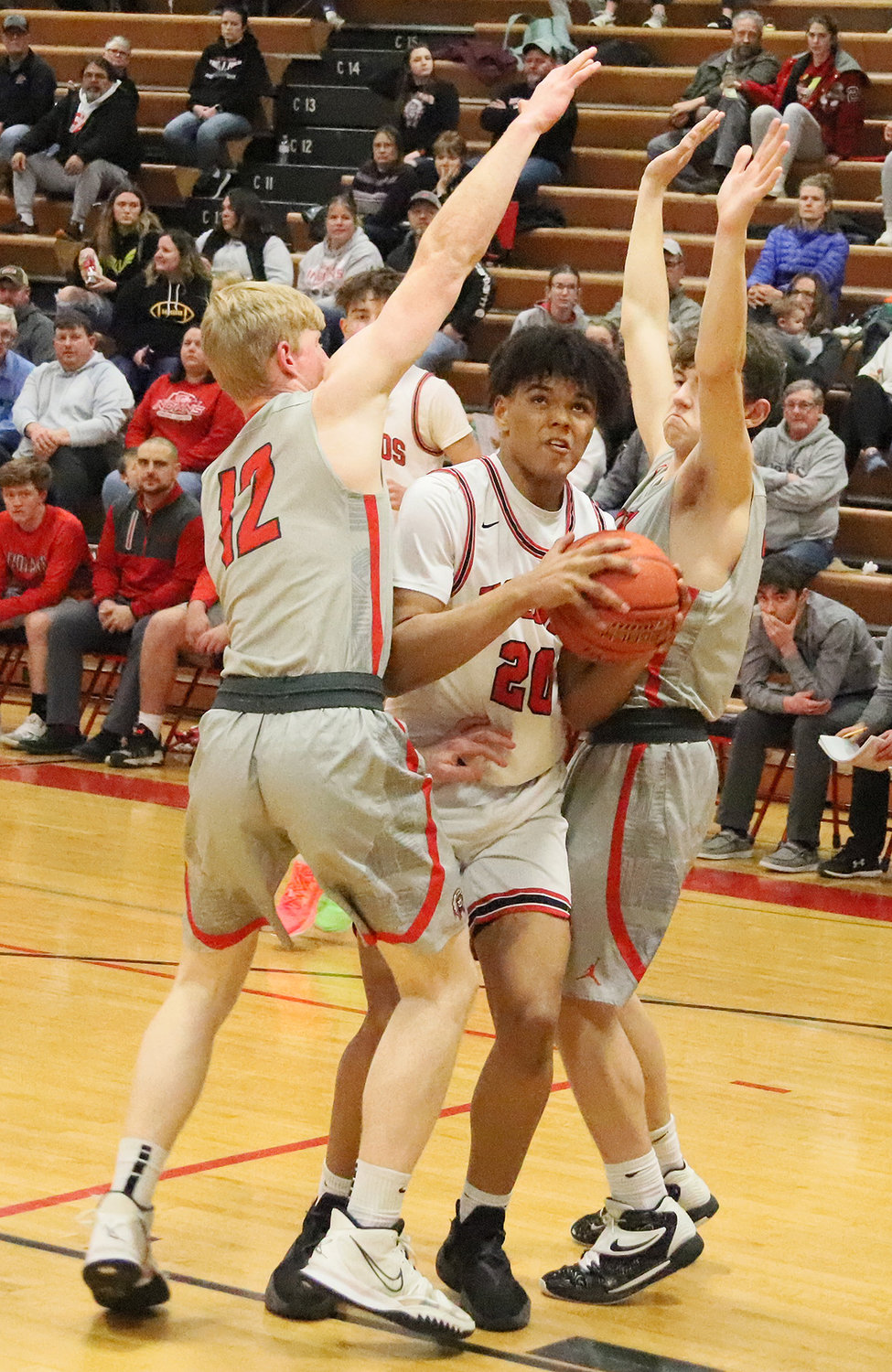 The Bloodhounds' Dayton Lamar squeezes in for a shot between a couple of Indian defenders including Conner Pearl (12).
Photo by Chuck Vandenberg/PCC
Previous Next
HOUNDS HOOPS

The real question was how are we going to rebound from Friday. I think a lot of people in the gym tonight were wondering that. We rebounded well. Were we perfect? No, but we were pretty good for four quarters.”
Ryan Wilson, FMHS Boys Head Coach
Chuck Vandenberg, Pen City Current Editor

FORT MADISON – The Fort Madison boys basketball team had some thinking and re-thinking to do after surrendering a 22-point lead last week against Keokuk.

The Hounds lost that critical Southeast Conference game after collapsing in the final 13 minutes of the game. But there was no collapse Tuesday as the Hounds rolled Clark County, Mo, 69-34.

Fort Madison played fast and aggressive and opened up a 10-0 lead behind a couple buckets from Hunter Cresswell, and a Carson Rashid 3-pointer.

Fort Madison opened the game up with a 12-point lead in the third period when Leif Boeding hit a 3-ball in front of the Indians’ bench on the left wing.

Clark County’s Grayden Kleine countered with a bucket for the Indians and then Fort Madison’s Julien Dear hit a 3-pointer from the left wing to make it a 13-point game and the Hounds held that lead through the first half, taking a 28-15 lead into the locker room.

Boeding, who finished with a game-high 18, hit another 3-pointer to open the scoring in the third period. The Bloodhound defense clamped down on the Indians, forcing the visitors to miss their first three shots from the field, while the Hounds pushed the lead to 41-15 as Aidan Boyer and Boeding combined for 13 Fort Madison points in the first 1:40 of the third period.

The Hounds ran away from Clark County from that point allowing Wilson to empty his bench with about four minutes left in the fourth period.

“We really moved the ball well tonight against the zone and the press and that allowed us to get some easy baskets. We also had some good inside-out going in the half-court,” Wilson said.

"But I think I was most impressed with our guys moving the ball up in transition. Our guards tend to overdribble when we have people open in the wings."

Wilson said the Hounds watched a lot of film in practice this week and kept pointing out where there were open guys on the floor, while the Hounds tried to dribble through presses.

“The real question was how are we going to rebound from Friday. I think a lot of people in the gym tonight were wondering that. We rebounded well. Were we perfect? No, but we were pretty good for four quarters,” Wilson said.

The Bloodhounds stand at 5-8 on the year and just 1-6 in Southeast Conference play. They take on Fairfield Thursday night on the road, and then travel to Burlington Notre Dame on Saturday. The Hounds have a rare Friday off this week.