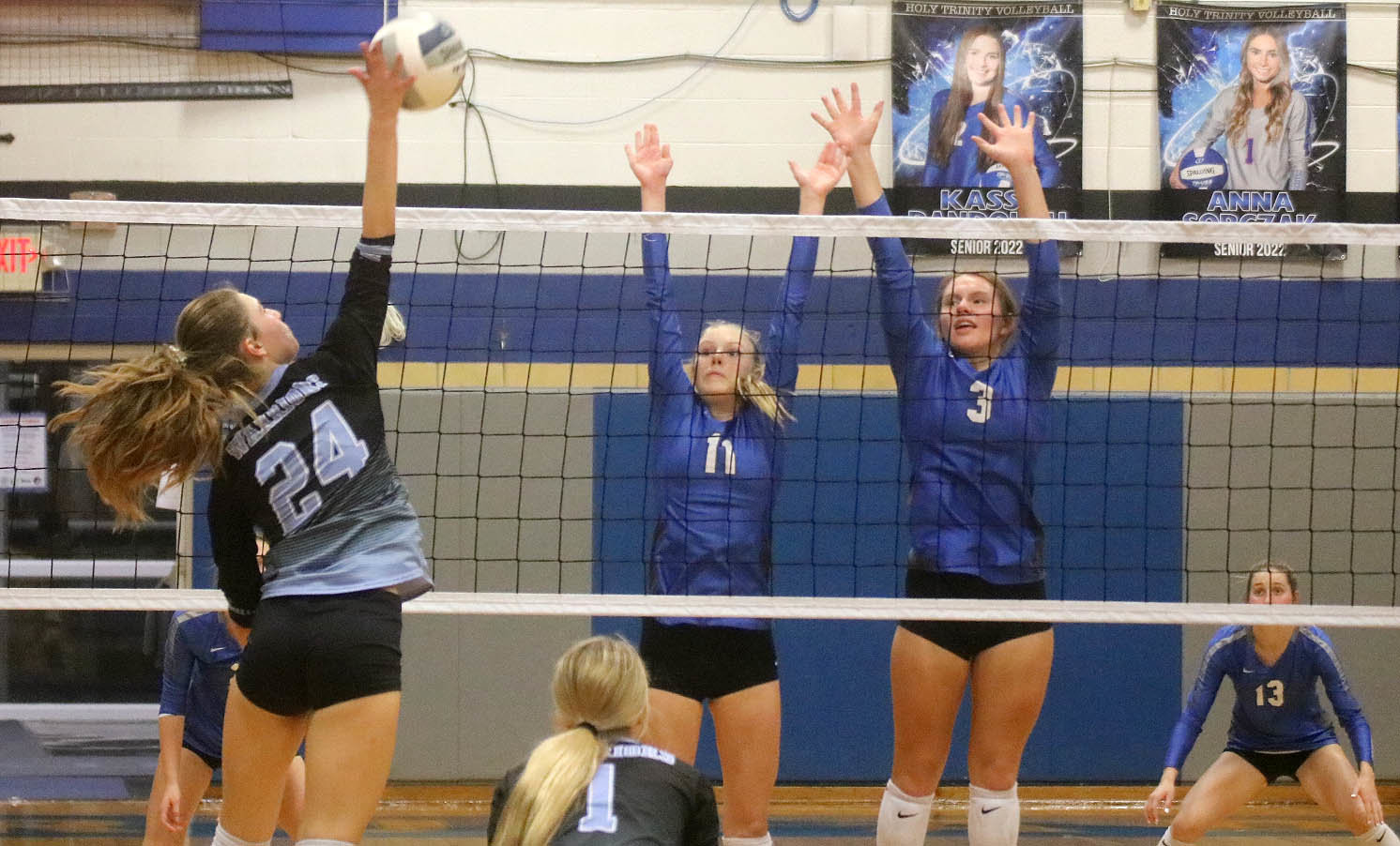 FORT MADISON - A slow start to the night proved to be just a fly in the ointment as Holy Trinity Catholic downed WACO 4-1 in Southeast Iowa Superconference volleyball action Thursday.

Head Coach Melissa Freesmeier said the Crusaders had good moments throughout the match, but they have to get rid of the sketchy starts.

"We had 16 errors in the first game. We have to eliminate those," she said. "I'm not taking anything away from WACO, they came ready to play. We were just back a bit and not doing the little things and not connecting.

"We had some great moments so I don't want to get away from that. The kids worked hard. I just don't think we had a lot of energy tonight."

The Crusaders were also without rotation-regular Reagan Holvoet who sat out the match as a precaution.

"We can't have that slow start," Freesmeier said. "We have to start from the get-go and work on getting the big plays earlier."

The Crusaders got down 3-5 in the first set, but then got five straight on Natalie Randolph services. Three WACO errors and a Kassi Randolph kill put HTC up 9-6. They would hold that two- to three-point cushion when Natalie Randolph's kill made it 19-16.

The Warriors then made a run starting with an attack from sophomore Emma Wagler that found the middle of the Crusaders' defense. Ellah Kissel then served up an ace followed by an error at the net and another on defense to tie things up at 20.

Katie Lichtey would then score a kill to give WACO a 21-20 lead that they would never relinquish.

But it was all HTC from that point through the second and third sets as both Randolph girls, Mary Kate Bendlage, Brooke Mueller, and Kayla Box got their bearings at the net.

Things tightened up again in the fourth set and, with WACO up 1-2, Anna Sobczak made a diving save on a loose ball that got picked up and returned short setting up an attack but Box and Bendlage put up a block for the sideout giving the Crusaders a little momentum.

They would push the lead to 11-8 on a Kassi Randolph kill, but Wagler would get a sideout on the next play at the net and Grace Coble would serve the next two points for the Warriors to make it 11-10 when a crosscourt smash from Natalie Randolph from the outside went long.

Mueller would get the sideout on the next serve to give the Crusaders a 12-10 lead and then Mueller would rotate back to the service line and lead HTC to five straight points to create some breathing room.

WACO would only get within three the rest of the way as HTC pulled away for the match.

Freesmeier said she was happy with the way the Crusaders responded in sets three and four. She said the first set loss may be something the girls needed in the last two weeks of regular season play.

"They came back in set two and played a little better and then again in three. The fourth was a bit wishy-washy, but at the end of the day we got the victory," she said.

This might be a good wake-up call being in October. You gotta go out and play every set and we know that but sometimes we get away from it."

Holy Trinity now rolls into some heavy tournament action at Pella, Knoxville, and Mediapolis. They also tangle with Class 3A No. 8 West Burlington again on Tuesday, with two other conference matches in the mix.

Mueller and Kassi Randolph were both 17 of 17 serving with three aces each. Randolph had 16 digs and a block. Sobczak led the Crusaders with 24 digs, she was also 14 of 15 serving with an ace. Natalie Randolph had 19 assists and was 24 of 29 attacking with 12 kills.

2014 Holy Trinity Catholic graduate and University of Nebraska All-American Mikaela Foecke was on the bench with the coaching staff Thursday night. Foecke has joined the coaching staff in a paid position after getting her coaching certificate at Freesmeier's urging.

Foecke enjoyed a standout career at Holy Trinity leading the Crusaders to a 2014 state title, the first in any sport for the school. She was also the Gatorade National Player of the Year her senior year at Holy Trinity. As a Husker, she piled up the awards, including being selected the co-Most Outstanding Player of the NCAA Championship with teammate Kelly Hunter after leading the Huskers to their fifth NCAA title all-time with 20 kills and 14 digs in the championship match against Florida.

"This is my alma mater and I'm back in the area. Melissa roped me into getting my coaching certificate and here we are," Foecke said. "But being back and working together is very nice."

Freesmeier said the Crusaders have always looked up to Mikaela and she has a role to play.

"The kids have always looked up to her and it's nice to have her on the bench and keeping everyone level and talking to them. I'm the bad cop, so she gets to be the good cop with all the rest of these good cops," Freesmeier said.

Foecke said she likes being a part of the team again, but has no plans to make it permanent.

"I like volunteering and helping where I can. I have a career and I don't want to be a career coach," she said.

As far as the game, Foecke said sometimes it's good to win bad.

"Honestly, I thought our team played good. Bad and good. Sometimes playing bad and winning is important," she said. "I think they struggled but they got through it and figured out how to win."