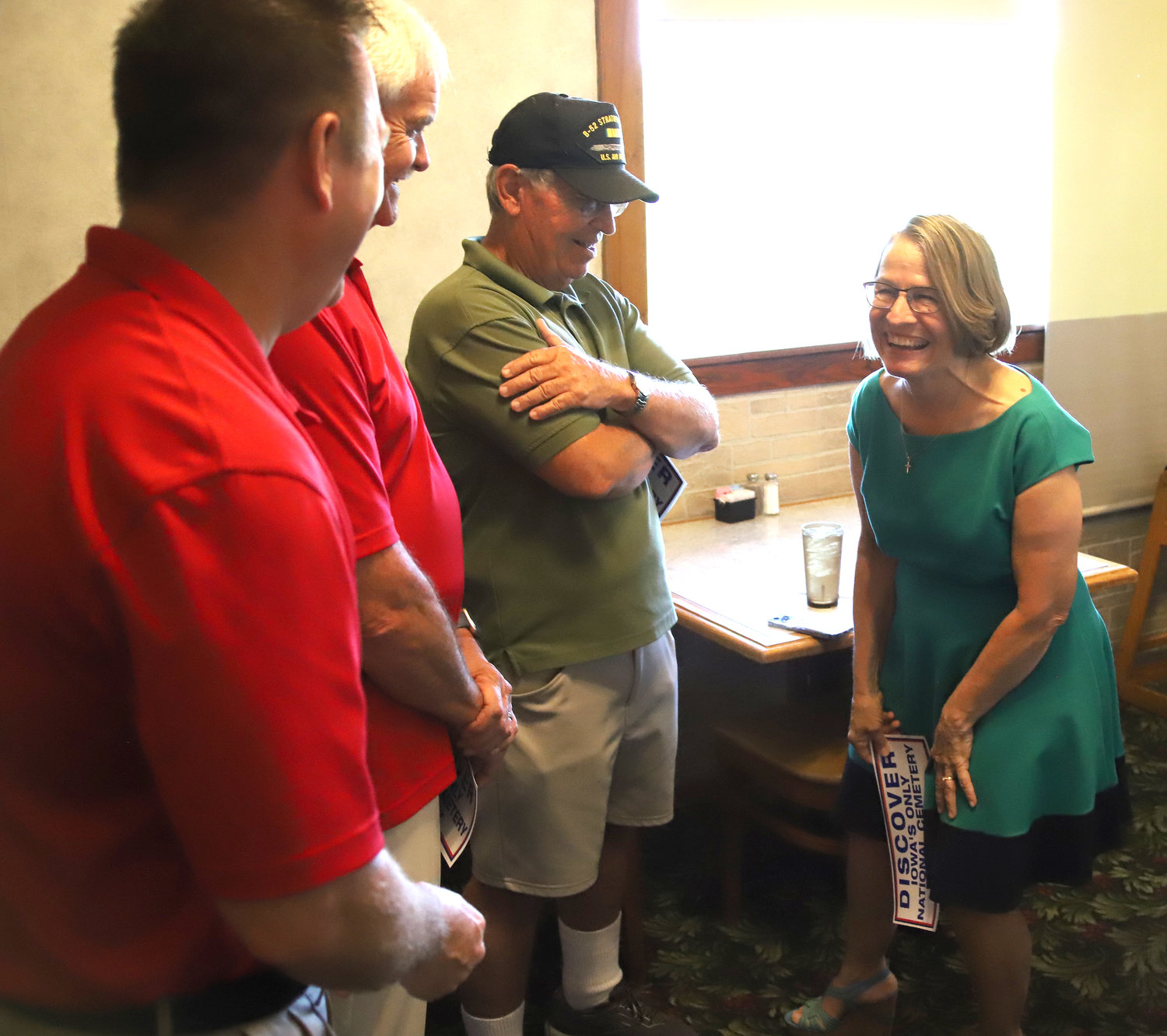 If people understand why you voted the way you did, they can see what the rationale is. I don't shy away from approaching people or groups and I try to be as transparent as possible.”
- Mariannette Miller-Meeks, 2nd District U.S. Representative
Chuck Vandenberg, Pen City Current Editor

FORT MADISON - With less than three months left before the general election, Iowa Congresswoman Mariannette Miller-Meeks made a stop in Fort Madison Wednesday morning for a meet-and-greet at Fort Colony Diner.

Miller-Meeks said she thinks this year's election for the newly created 1st Congressional District will be a reflection of what she described as a growing displeasure with President Joe Biden's policies.

"I think when you look at the favorability of the president throughout Iowa and the district, his favorability is under the water. People talk to us about the price of gasoline, the price of food, which is expected to go up more," she said.

"The disastrous withdrawal of Afghanistan that was inept and incompetent and has led to further aggression from other nations, especially looking at Russian agression in Ukraine."

Two years ago, Miller-Meeks defeated Rita Hart in the tightest Congressional race in the country winning by six votes after several recounts in 2020.

"I think southeast Iowa is a competitive district and it will remain a competitive race. I don't think it will be that close this election cycle," she said.

She said Biden's policies have created inflationary pressures that are impacting all facets of rural Iowa.

"Our ag economy is impacted, not only gas and diesel, but also fertilizer. These issues affect farmers and our ability to get to work. It affects input costs, restaurants costs of food. There are lot of small businesses affected coming out the pandemic when they were closed down," she said.

"Things are just getting better then they're hit with this. Inflation is a tax on everyone - an insidious regressive tax that affects seniors on fixed incomes, small businesses, and working families."

Miller-Meeks also pointed to the Inflation Reduction Act and said the administration is planning to hire 87,000 new IRS agents with the majority auditing middle class America.

"Over 50% targeted by these audits will be people making less than $75,000 a year. It's really going to go after common people who then are going to be reluctant to take legalized itemized deductions," she said.

"To put that in perspective, that's more (staff) than the Pentagon, the State Department, and Custom Border protection agencies combined.

"The average person doesn't have the time to battle with the IRS."

She said the timing is suspicious and it's odd that the White House would not be aware that this was going to happen since the department of justice is in the administrative branch.

However, Natasha Sarin, a Treasury Department counselor, told Time Magazine Tuesday that describing the addition of staff as an effort to scrutinize the middle class or small business is "wholly inaccurate".

Sarin said there is a big wave of attrition coming to the department in the next five years and a major part of the Inflation Reduction Act resources are aimed at backfilling those positions.

Miller-Meeks was also recently censured by Mahaska County for her vote on the Respect for Marriage Act last Thursday.

The Congresswoman voted in support of the Respect for Marriage Act, which would ban states from denying recognition for out-of-state-marriages based on sex, race, ethnicity, or origin.

When asked what impact the censure would have, Miller-Meeks said she stands behind the vote.

"I'm willing and able to answer questions on why I voted the way I did," she said.

"If people understand why you voted the way you did, they can see what the rationale is. I don't shy away from approaching people or groups and I try to be as transparent as possible."