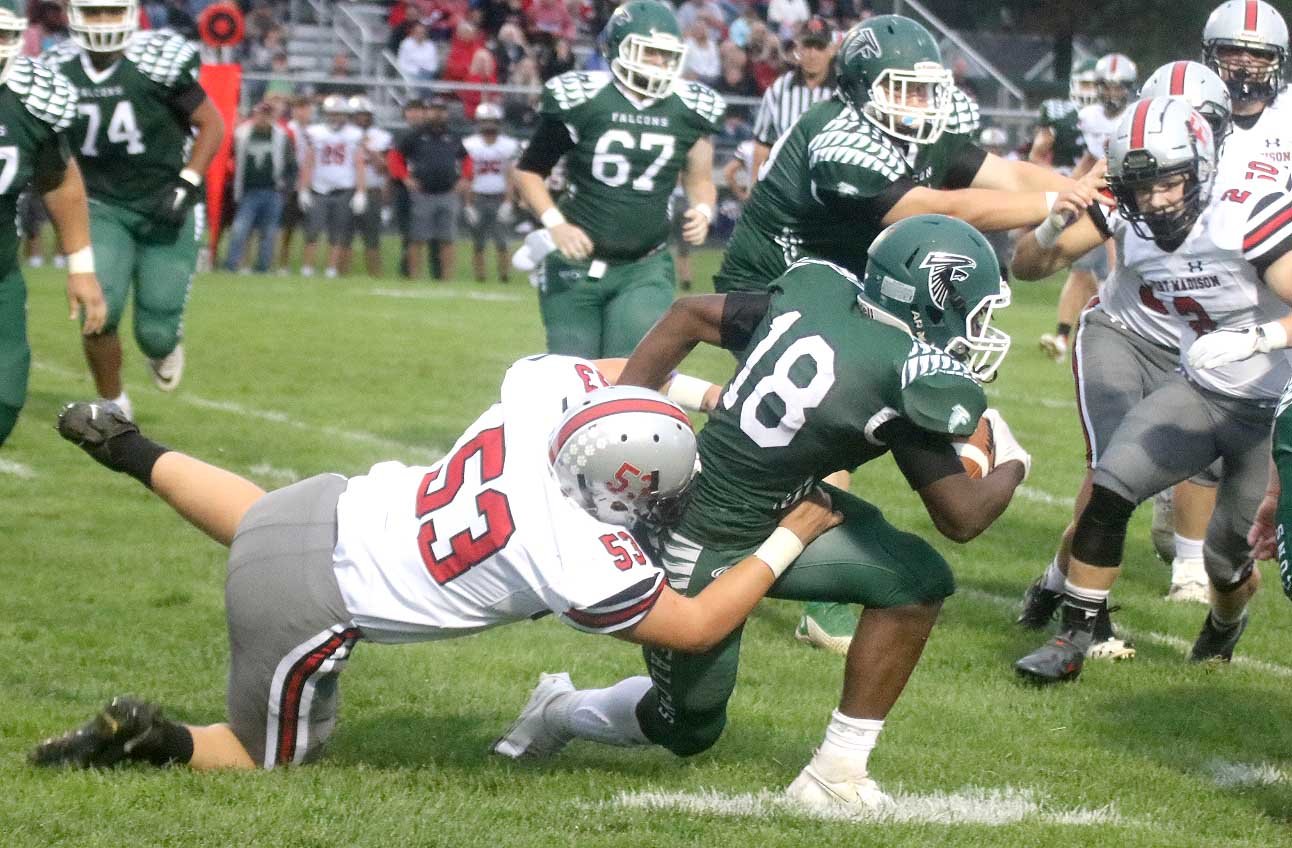 His Bloodhounds rolled to a 23-0 win over West Burlington Friday night in a wet, but manageable, non-district football matchup at Bill Nelson Field.

The Hounds came out and looked to be putting one away early with Landes Williams starting to find a nice working relationship with his brother Kane. The two hooked up for two catches and 43 yards in the first series including a 37-yard catch and run to the left side where Kane found the endzone for the first time this year.

A blocked extra point had the Hounds up 6-0.

Fort Madison's defense, which has pitched two shutouts so far this season, seemed to have the Falcons pinned on two three and outs in the host's first two possessions, but a roughing the kicker call on the Hounds hitting West Burlington's Hayden Vandenberg gave the Falcons a fresh set at their own 35.

Vandenberg would rush for a yard and throw for four before missing on 3rd and 5 forcing another punt.

With 5:50 left in the first quarter Fort Madison put together an 8-play 78 yard drive on the next series where the Williams brothers again hooked up for 8 yards, before Xander Wellman got free down the right sideline and hauled in a pass over his left shoulder for a 69-yard strike. Wellman would get pulled down at the four, and after sophomore running back Teague Smith got taken down for a 1-yard loss, Williams called his own number and rushed in for a five-yard score, his fourth TD of the year.

This time Wellman's kick was good and the Hounds were up 13-0.

Vandenberg went 1-2 in the next series completing a small pitch play, but the Falcons couldn't move the chains and were forced to punt for the third time in the period.

The Bloodhounds would take the next drive and go 10 plays and 45 yards before getting hung up at the Falcons' 20 when a pass from Williams fell to the wet grass. Wellman converted the 30-yard field goal to give Fort Madison a 16-0 lead.

From that point on, Doherty said it was like a bad dream where he was running in slow motion.

"It felt like one of those bad nightmares when you're running in slow motion. I don't think we were mentally ready to go and that's my fault. Nothing against them, they had a great game plan, they've got a good team I think," Doherty said.

Neither team would score a point until Fort Madison's last series of the game.

The Hounds went 12 plays before Landes Williams and Tate Johnson, a duo that connected for seven scores just a year ago, hooked up on a 25-yard touchdown pass, where Johnson found an inside seam to the post and was wide open in the endzone.

"We set it up with some bubble routes and then we just kind of found a seam that was wide open," Johnson said.

West Burlington didn't get closer than the Hounds' 28-yard line all night, more of the Hounds' bend-don't-break defensively philosophy.

Doherty said the Hounds have a team goal of holding opponents to under 14 points every Friday.

"Meeting goals is good," he said after the game. "Fourteen points or less is one of our defensive goals and that's a shout out to Coach (Jason) Crooks and the defensive staff for bending but not breaking."

Crooks said the defense is predicated on teaching good football.

"We have great coaches and a position coach for each position which is great," Crooks said. "These kids play hard and they have a belief.

"We preach getting off blocks all the time and not hanging around. Coach (Ryan) Smith has done a great job with TNT (tackle-nose-tackle) guys. So I'm linebacker focused and I'm looking for who's gonna step up as linebackers and it's been nice to see the TNTs and the (defensive backs) playing well."

Doherty said West Burlington made some solid adjustments in the second period and the Falcons were keyed up and ready to go.

"They made some adjustments and they decided to pin their ears back and go and we kinda got caught on our heels a bit. We gotta wake up in those situations. We're prepared schematically, so I think it was more of an attitude thing," he said of the offensive drought in the middle two quarters.

"We came back and did some nice things in the second half at times, but we've got a lot of work to do and fixes to make."

Johnson also led the Hounds on defense with 6.5 tackles. Daniel Sokolik and Mikey DiPrima each had 5.5 tackles for the Hounds. Jakob McGowan and Christian Vincent each had 1/2 a sack.

Doherty said Abram Lorence and Matt Moore both came in off the bench to relieve some of the Hounds that play on both sides of the ball, and helped give breathers without losing quality at the positions.

He also said that aside from the tough going in the final three periods, a win is a win.

"My big thing is that I don't want the guys to forget that winning football games is hard. There's been plenty of times that we didn't win any football games, so I don't want them to be upset with a win and we're going to take it. We'll watch film and make adjustments, but we won a football game and we want to enjoy it for 24 hours," he said.