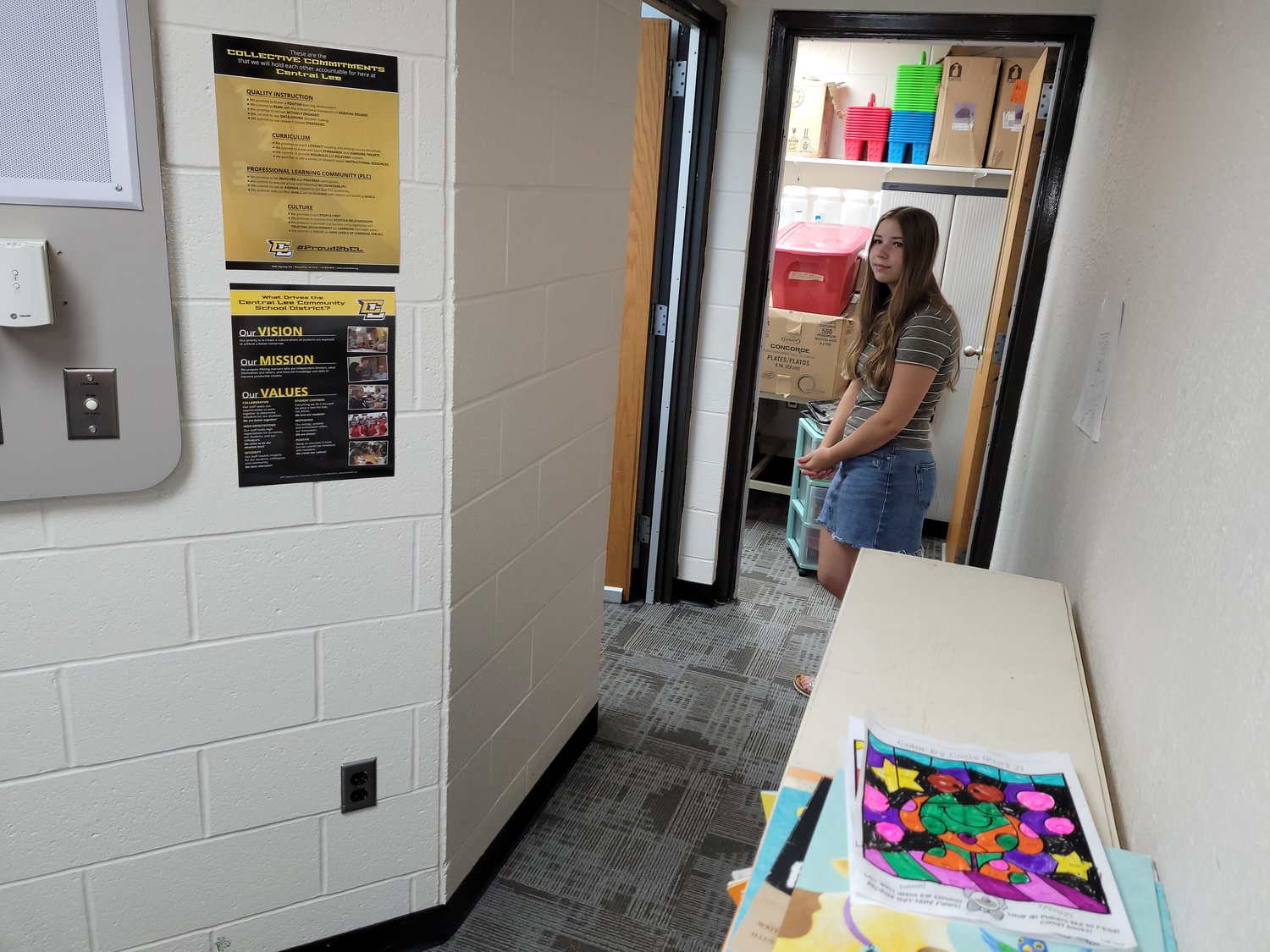 Incoming freshman Aubrey Weber, stands in the hallway of two former band practice rooms at Central Lee elementary school. The walls in front of her will be brought down and a door added to the front to create a larger sensory room for neuro-diverse challenges.
Photo by Chuck Vandenberg/PCC 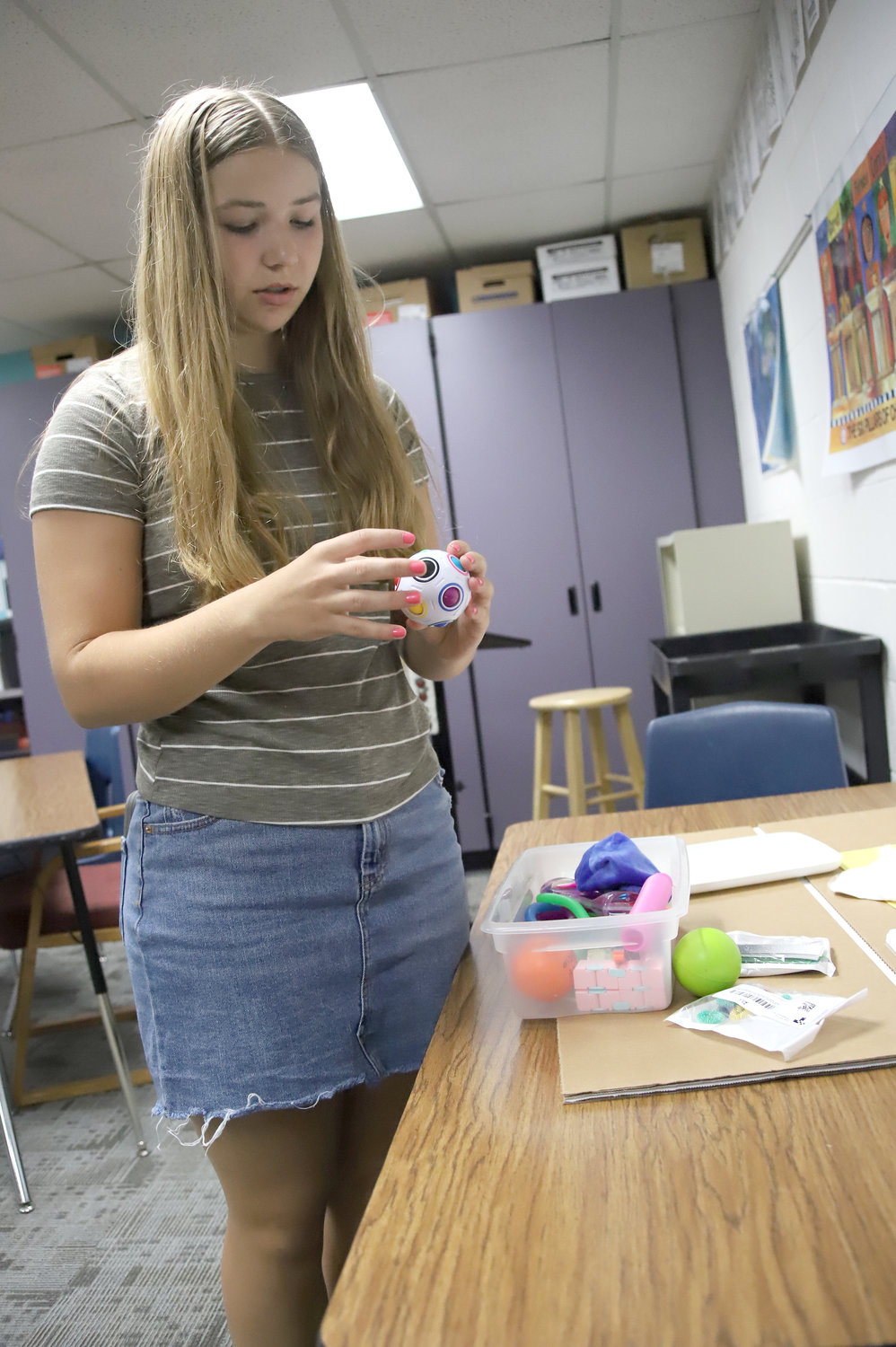 Weber shows some of the tactile pieces that will be part of a new sensory room at Central Lee High School. Weber won a Community Future Problems Solvers' International competition in June.
Photo by Chuck Vandenberg/PCC
Previous Next
Posted Sunday, August 7, 2022 1:53 pm

I explain it like when you go to the doctors office and you have those beads on metal, It's kind of like that. They'll have things you can tie, beads, lots of textures and things like that to play with to get their brains back on task.”
- Aubrey Weber, Central Lee High School
Sensory Room

Central Lee incoming freshman has plans to build a sensory room for students at Central Lee elementary this year. She recently got a $10,000 grant from the Lee County Charitable Trust

DONNELLSON - While most kids in middle school are trying to find a way to fit in, a Central Lee High School incoming freshman is literally tearing down walls.

Aubrey Weber, 14, of Donnellson won an award at the International Future Problem Solving competition back in June with an idea for creating sensory space with students with learning disabilities - or neuro-diversity.

Now just a month later, Weber is $10,000 closer to her project's realization and excited to see the project come to fruition.

Weber applied to the North Lee County Community Foundation earlier this summer for a grant to help with the costs of tearing down some walls in the district's K-8 building, after talking with Central Lee Superintendent Dr. Andy Crozier. She said Crozier was on board immediately with the project.

Weber went through an extensive interview and application process with the charitable fund and was awarded the money in June.

"I knew I needed funding because of the bigger things that needed to happen here for students'. My mom was talking with a friend about this  grant program, so I looked up what I needed to do and applied and went to the meeting," Weber said.

Hollie Weber, Aubrey's mother and a teacher in the disrict, said one of the fun things she gets to see as a teacher with Community Problem Solvers is how activist-minded the students become during the process.

Aubrey Weber had an idea for the project several years ago, but COVID got in the way of those plans. As things started to ease up, she decided to move forward with the effort.

The project involves removing several cinder block walls in rooms that are currently used for storage and were originally built for individual band lessons. The rooms are close to where special education programming is now being done and removing two walls allow for a larger sensory room.

Weber put together the plan for the space as part of her Future Problem Solving project which includes supplying correct lighting, and hands-on toys and trinkets to help students refocus their energy, while providing a safe place to decompress.

One of the tools she wants to bring to the room is tactile board which costs about $2,000.

"I explain it like when you go to the doctors office and you have those beads on metal, It's kind of like that. They'll have things you can tie, beads, lots of textures and things like that to play with to get their brains back on task," she said.

Crozier told her it would cost about $4,000 to remove the walls. The two walls being taken down will create a larger space that kids can appreciate rather than just getting by with squeezing something in somewhere.

"Before I started I did a lot of research to see what is needed, including pricing after Andrea (Wheatley), our Level II special education instructor, said she really liked the ideas," Weber said.

Weber went to New London and Fort Madison's Lincoln Elementary to look at their sensory rooms. She said Fort Madison has a larger sensory room with different aspects for students to engage in, while New London had stations along a hallway where things could be added and removed. The hallway wasn't used much for regular student traffic, so Weber decided to add some facets to her project in a hallway near the future classroom at Central Lee.

Weber said she hopes to get the classroom up and running before the second semester of the upcoming school year.

"I thought this project could be used so much and help them with everything."

She said research shows that seven minutes in the sensory room can calm the brain and get the students ready to go back to regular class, and be more ready for the day.

Weber said associates are with the students most of the time, but she said details for the program including supervision still needs to be worked out.

"It can depend on the kid. The older kids know how to control better than the younger kids, so it will just depend on how they act," Weber said.