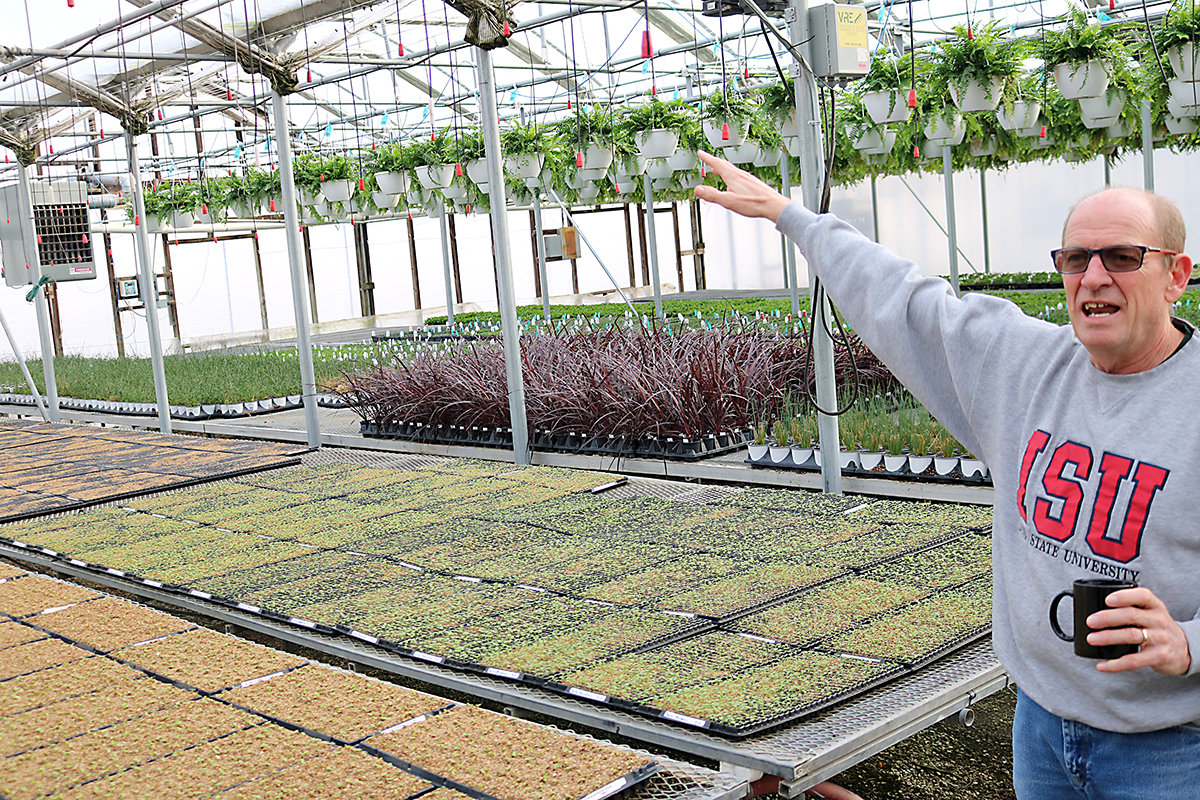 Matt Mohrfeld of Matt's Greenhouse is celebrating 40 years in business on Feb. 22. Here Mohrfeld shows one of the greenhouse units across from Rodeo Arena full of bedding plants and seedlings.
Posted Saturday, January 14, 2017 11:33 am

FORT MADISON - "It's an evolution, not a revolution."

That's a quote from 60-year-old Matt Mohrfeld in response to a basic question about the flower business.

But a twinkle in his eye, and the wide smile he shares with everyone, shows maybe it's more of his mantra on life than a business perspective.

The owner and founder of Matt's Greenhouse will roll over 40 years in business on Feb. 22 and clearly has no plans to step aside. A Chamber Ambassador call has been set for Feb. 24 at his office at the top of 15th Street.

"I may lean into, but I'm not stepping out of it," he said Friday morning in his warehouse office nestled between the white rows of greenhouses where his wholesale bedding plant business, literally, regrows every year.

As evidence that he has no intention of sliding away from the work he's been doing, Mohrfeld, who left Iowa State University before starting his business, is now just about a year away from a degree in Agronomy. Clearly the degree isn't what positioned Mohrfeld for the success he's had, so going after the degree begged the question, why?

"The mind is like the body and you have to keep working to keep it strong," Mohrfeld said. "And I have a 14-year-old son at home there's only one way he's going to learn and that's by somebody doing it."

This is highly believable coming from a man who literally at times will run across the state of Iowa with a group of friends, can constantly be seen on Facebook crossing a finish line or barking encouragement to his son, Jacob or another human fish while perched at the end of a swimming pool with a stopwatch.

Mohrfeld's life seems, and feels, even in a short hour-long conversation, like a race. But not a race to see how much can be done before it ends, but more of race of 'what's next'...a constant drive to...well...evolve.

Matt's Greenhouse started in 1976 when he took over a two-block area at the bottom of the bluff on Avenue B that his brother Rich had just purchased.

"There was a stumbling little greenhouse there, the old Auge Greenhouse," Mohrfeld said. "I came home from ISU and said, hey, I'd like to run a garden center there. So that spring I did and that's how it all started," he said.

About a year later, Mohrfeld acquired a flower shop near Faeth's called the East End Florist. Shortly after opening that he closed it and incorporated the customer base into his other greenhouse. Then in 1989 he purchased the "Cushman's" building on the highway and moved the retail garden and flower shop there. In 1998 he grabbed the property east of the rodeo arena and started a massive expansion for wholesale bedding plants. In 2000 he married his wife Beth and in 2003 Jacob was born. Jacob attends Holy Trinity and competes in tri-athalons and swims competitively for Burlington High School.

Now, Mohrfeld said he has the fifth largest wholesale greenhouse operation in the state. He credits his start in the wholesale side to Phil Beebe of Wever.

"At that time I had the retail business, I was also doing some work for Phil and I really started to learn the wholesale side of the business. He was starting to grow beyond his capacity and told me to get into the business and even asked me to take over a route and that sent me off onto this wholesale bedding plant business."

As a result of a self-described "Conservative-aggressive approach to expansion", Mohrfeld partnered with Quincy's Niemann Foods (County Market, Save-A-Lot, Ace Hardware) who is now his largest customer.

Indeed. Mohrfeld said his customer base ranges from just north of St. Louis. Mo., north to Clinton, Iowa and east to just this side of Champaign, Ill. with limited customers to the west of Fort Madison.

The biggest hurdles he's seen in the past 40 years?

"Probably most of them myself," he said.

"As you grow you have to manage and think and learn. You have to change with the market and the nice thing in my business is it's an evolution and not a revolution."

He also said one of the keys to his success - and a constantly developing part of his business - is attracting, retaining and training employees. His company over the past five years has put $2.5 million in payroll back into the local economy. He has a regular staff of about 10 full-time employees, but expands to 60 during the planting season which runs from the beginning of the year until about June, where he says then production and distribution start to overlap.

"You have to build that staff...team if you will.... a family, and then keep working, growing that new customer base. We're just now adding a customer development person. We want to use social media this year to tell our story a little better about our team," he said.

A Facebook post this past week showed Mohrfeld moving around a whiteboard in his office in a red hoodie with an old digital scoreboard in the background pointing to attributes he's looking for as he literally broadcasts his new Customer Development opening.

"We had a response to that video in two minutes. Two minutes.. and we've had at least 12 more come in since then. It was incredible. And I never would have done that had I not gone back to work on finishing my degree. I learned that in a leadership training class."

Mohrfeld also said he is passionate about keeping the business as energy friendly as possible. He had solar panels erected on a north greenhouse and said that's reducing his energy demand and he may look at expanding that in the future as well.

His cessation plans are simple, especially for a man who thinks he may live forever.

"I'm going keep making it an aggressive viable business and surround myself with quality people and see what happens down the road. I have no immediate intentions of retiring, but a very immediate intention of taking on a different role. For the past five years I've taken on more of a visionary role than a day-to-day role and that's going to continue," Mohrfeld said.

"It's a question that everybody asks and I tell everyone, 'Everybody's going to die but me.. but I could be wrong about that'."