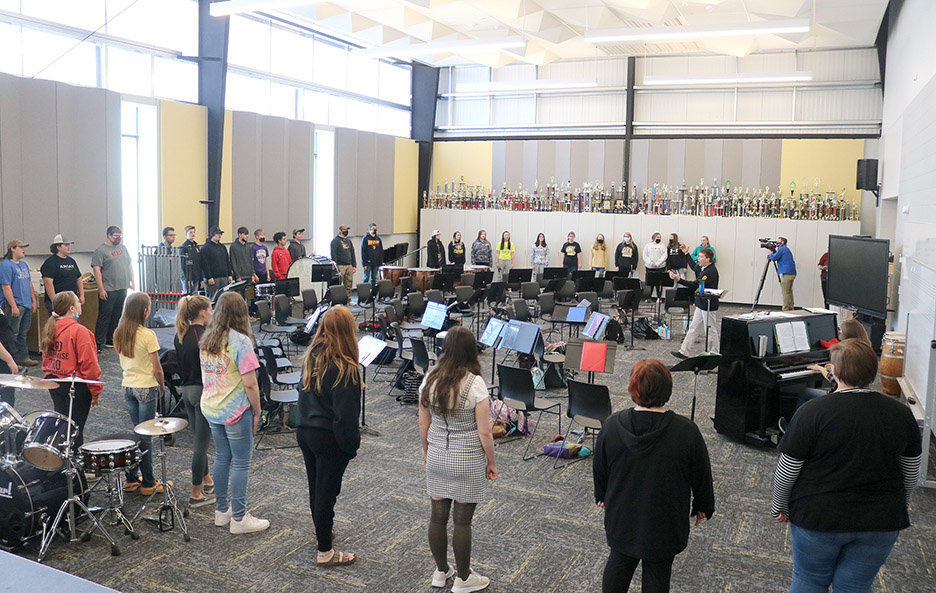 Students at the school got their first chance to practice in the new fine arts auditorium that is part of the district's $12.9 million facilities upgrade as the new school week began.

The new auditorium added to the southeast corner of the current building is almost three stories high with a full mirror on the far east wall where show choir performers can actually see their workouts. Acoustic panels are attached to the walls and the ceiling, while the history of the Central Lee fine arts program sits in the way of about 300 trophies perched above the classes on the west side.

Additional offices and practice rooms are also included with the upgrade.

Vocal Music Director Tracy Madsen said the new facility requires a small temporary adjustment with the ear, but will allow the district's programs to grow quickly.

"It is a little adjustment. The acoustics are much, much better than what our last room was," he said.

The last room was about the size of two regular classrooms all surrounded by cinder block.

Madsen said the school already has a rich history of success and the added facilities will allow more opportunities for students to showcase their skills.

"Right now we're going to stick with our traditional programming. There is room to grow in many different ways and one of the benefits here is that we have space to create transitions that are smoother between concert and show choir, jazz band and concert band and keep the flow between classrooms moving," he said.

"We'll still use the gym for traditional events, but smaller performances and sneak peaks of solo and ensemble or impromptu show choir performances can be added here."

Keating Fuger, a sophomore said he could immediately hear the difference in the more open space.

"The volume change is the biggest thing. In the old room it was so loud we couldn't tell if we needed to be better individually. Now we can have fun with it. The new room is great and it's really a step up from where we were," he said.

Emily Barnhardt said she was excited to get out of the tiny room.

"Right now you can hear everyone singing and we can get louder without worrying about being too loud," she said.
"And when we're in show choir and dancing around we can spread out more and practice so I'm excited to see that grow."

"He's always got ideas. I thought I worked hard until Tracy got here. He runs circles around me."

Herdrich said the new facilities can also be used for work-based learning for students that may want to look at lighting and sound careers.

"You've got kids that could want to go into that kind of technology. Tracy can take those kids and work with them on that," she said.

"I think the greatest potential is that our performances are limited right now. Obviously with the new gym that expands but we can do performances in this room, too." Crozier said.

"Tracy is always coming up with new ideas for our kids to perform at another level and some of those are smaller venues. This is still a pretty big spot so we could do a performance here for a smaller crowd. Even beyond music, this space can be used by others.

"That room was not going to be conducive to grow our fine arts. Our enrollment is growing, but even if our enrollment stayed stagnant its not what our students need in the 21st century for fine arts."