Solar field project should start construction in summer of 2023. 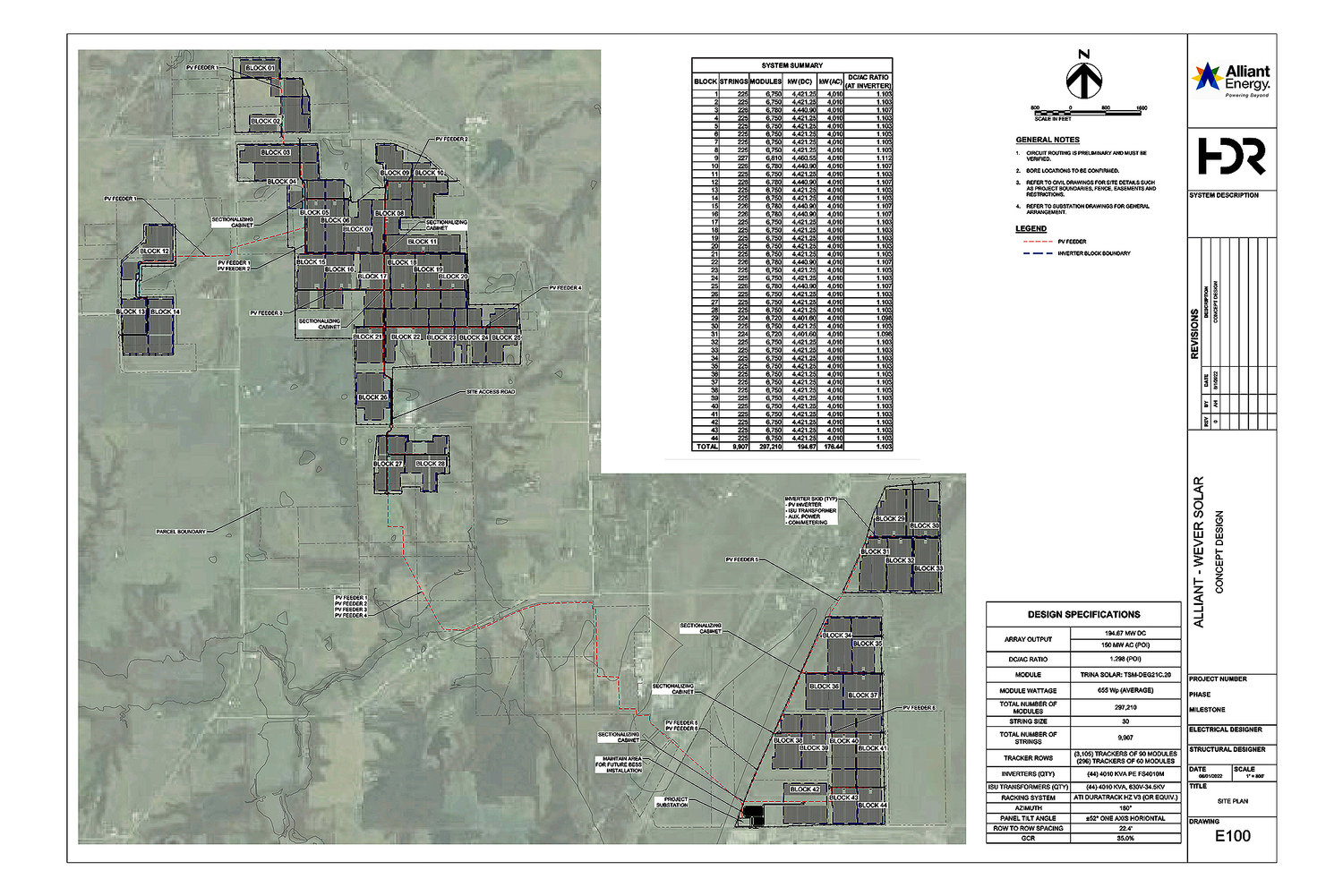 An engineering map of the proposed 150 megawatt solar field planned by Alliant Energy was released Monday at the Lee County Board of Supervisor's meeting. Supervisors approved a joint agreement with Alliant outlining responsibilities of the project
Image courtesy of Alliant Energy

I talked to one of the landowners who was ecstatic. He was very pleased with the agreement. He said it was a no-brainer and there was no way he was going to turn it down”
Ron Fedler, Lee County Supervisor
Chuck Vandenberg, Pen City Current Editor

LEE COUNTY - Lee County and Alliant Energy have entered into a joint agreement that outlines the responsibilities of each regarding a 2023 solar field project near Wever.

The project is planned to be the largest single solar field project in the state at 150 megawatts and would include battery storage facilities close to the Iowa Fertilizer Plant.

Justin Foss, strategic project manager at Alliant Energy told the Lee County Board of Supervisors Monday  the project could start in quarter three of 2023 and would be finished by the third or fourth quarter of 2024.

There was no eminent domain utilized in securing easements for the work.

Voss said all the property owners involved have voluntarily signed easement agreements for the property.

Board member Ron Fedler said he's heard nothing but good things about the project from property owners.

"I talked to one of the landowners who was ecstatic. He was very pleased with the agreement. He said it was a no-brainer and there was no way he was going to turn it down," Fedler said.

The agreement stipulates that the county can recoup costs associated with the project within 60 days of receipt of costs. Alliant and the county agreed to negotiate in good faith any costs the county incurs as part of the agreement.

The agreement also outlines how Alliant will reimburse the county for any damage to county roads as part of a road haul agreement. The details of that subsequent agreement haven't been finalized.

County Engineer Ben Hull said there will also be language for catastrophic damage to any county roads in the unlikely event something like that would happen.

Hull said Alliant's plans are well within all county required setbacks from county property including roads.

"We have setbacks both from structures and county rights of way addressed in here. All those distances exceed Lee County ordinances for right of ways," Hull said.

"Should the county have incidental fees for staff or whatnot, there's some reimbursement there, too. We've also agreed separately, to work on a haul road agreements specifically about the roads and we've made a lot of progress on it."

Hull said when Alliant picks a contractor they will also be held accountable and responsible for the work.

The agreement also includes a parent guaranty or bond that will be provided by Alliant Energy to the county within 60 days of Monday's approval of the agreement.

"We do have the ability to build in the flood plain and we will. The question is are we protected against a 500-year flood or a 100-year flood," Foss said.

"If the flood amount is too high, then we'll end up not building in that area, because it would be cost prohibitive to raise our equipment up that high."

Foss said in the event that happens the project has secured enough property northwest of the IFC plant to add that solar equipment to that higher ground.

The easement agreements are good for 30 years with two additional 10-year extensions being optional.