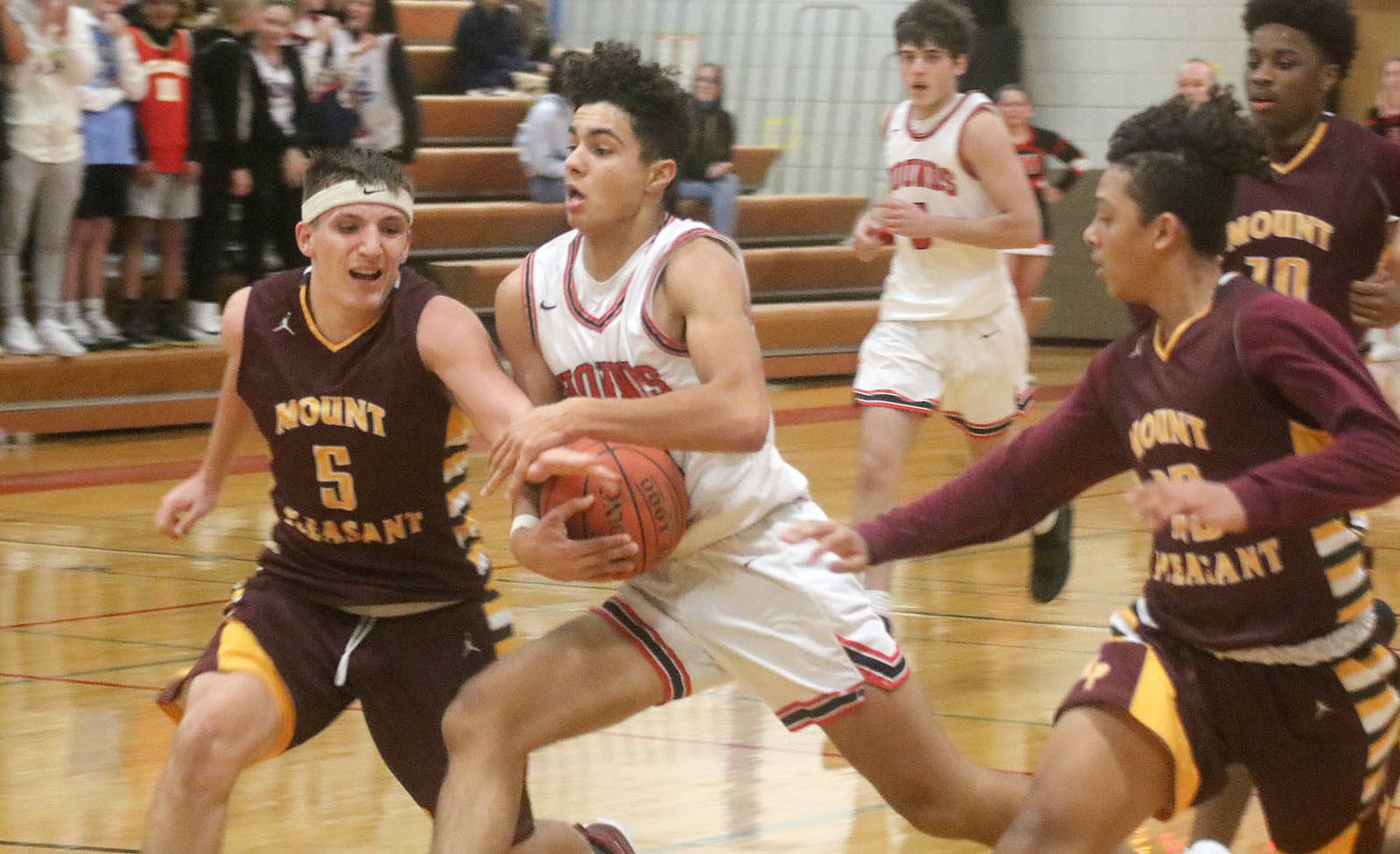 Fort Madison senior Dayton Davis gets fouled as he pushes the ball up the floor in the 1st half of Friday's 47-45 win over Mt. Pleasant to open this year's campaign. Photo by Chuck Vandenberg/PCC
Posted Saturday, December 4, 2021 6:00 am

The Hound faithful rattled the rafters Thursday night when sophomore Teague Smith rallied at 170 pounds to get a pin in a crucial match against Quincy that helped the Hounds to a win.

Then on Friday night, senior Phillip Goldie took a glass pass from fellow senior Miles Dear on a breakaway and put it down with both hands to bring both sides of the Hound Dome to its feet as Fort Madison eeked out a 47-45 win over Mt. Pleasant in the Bloodhounds' season opener.

The dunk came early with Fort Madison up 13-4. On a Mt. Pleasant turnover, Dear came out on the left side on a breakaway, peeked back and saw Goldie trailing. Dear pushed the easy layup off the glass nicely to Goldie who took it on the right side and put it down.

Mt. Pleasant would go on a run from that point, however, cutting the lead to 18-10 on a bucket by Payton Hagans, ending a 6-3 run and the first quarter.

Senior Tate Johnson would hit a 3-ball from the right wing to open the second quarter and give Fort Madison a 21-10 lead.

The Panthers would go on another run, this time a 16-7 spread behind seven points from Dewon Trent to cut the lead to just two at 28-26 at the half.

Trent and Fort Madison's Dayton Davis would tie for game-high scoring honors with 17.

Mt. Pleasant's Owen Vansickle opened the third quarter with a bucket to tie the game at 28. The two teams would work ties at 31 and 33 before Mt. Pleasant took its first lead of the game at 34-33 on a freethrow from Dylon Hagans.

A Davis 3-pointer from the left wing would put Fort Madison back up by one and the game never had a deficit of more than four the rest of the way. However, the Bloodhounds never again gave up the lead.

At 42-41, Miles Dear missed a 14-foot jumper from the right baseline, but Davis gobbled up the rebound and missed inside the lane. Dear streaked back across to grab up Davis' miss and he missed inside, but grabbed his own rebound and scored with 3:19 left in the game for a 44-41 lead.

Payton Hagans would convert a couple freethrows after Reiburn Turnbull fouled him trying to drive the lane. Turnbull would then get fouled in the next possession and get his only point of the night on the front end of the one-and-one for a 45-43 lead.

The Hounds' defense would hold on the next possession before Davis would put back a Tate Johnson miss for a 47-43 lead. Fort Madison would call a timeout to set up a defense on the inbounds. Trent would get the ball inside on the right baseline and score to cut the lead to two, 47-45, but Fort Madison was able to run out the clock for the win.

Head Coach Ryan Wilson said the Hounds started great and then got sloppy on defense.

"I said at the beginning of the season the key to us this year will be defense and transition," Wilson said.

He said the dunk from Goldie was a big part of keeping a very active student body and crowd checking.

"We get up 15-4 and we get that huge dunk from Phillip, and that was awesome and everyone goes nuts... we need that kinda stuff. Then Phillip and Miles tried to get a little cute and we have to know when we can do it and when we can't.

"We were better in the second half overall. Dayton was active on the board, but how many open layups did we miss. If we make even 70% of those layups we're talking a bit different now. But it's the first game and we gotta get better in those situations."

Dear had 14 points on the night, while Fort Madison got nine from Corey Hopper who had the first five points of the game. Tate Johnson and Goldie each had three points and Turnbull had one.

The Hounds put up their 1-0 record on Saturday, again at the Hound Dome, against Williamsburg.