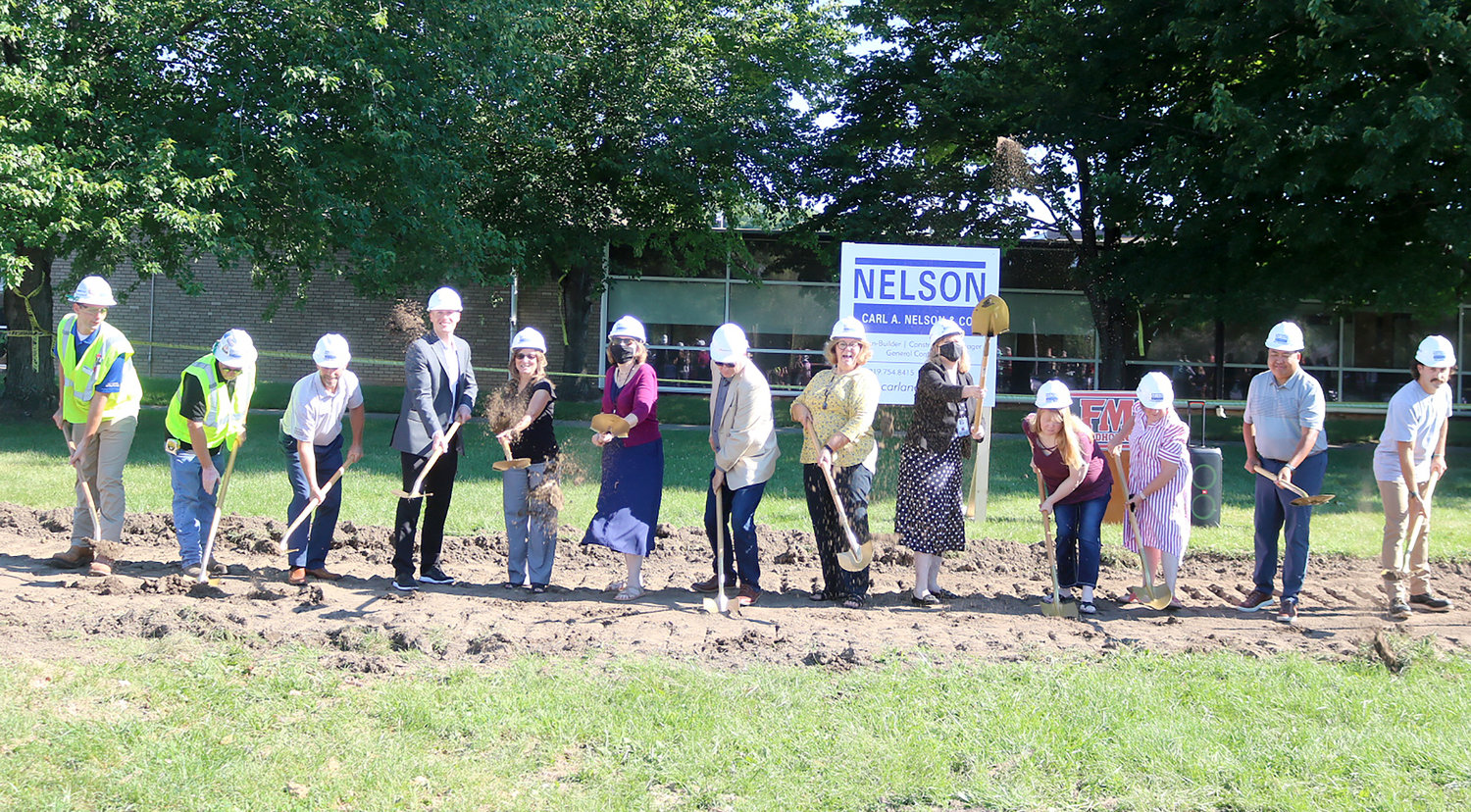 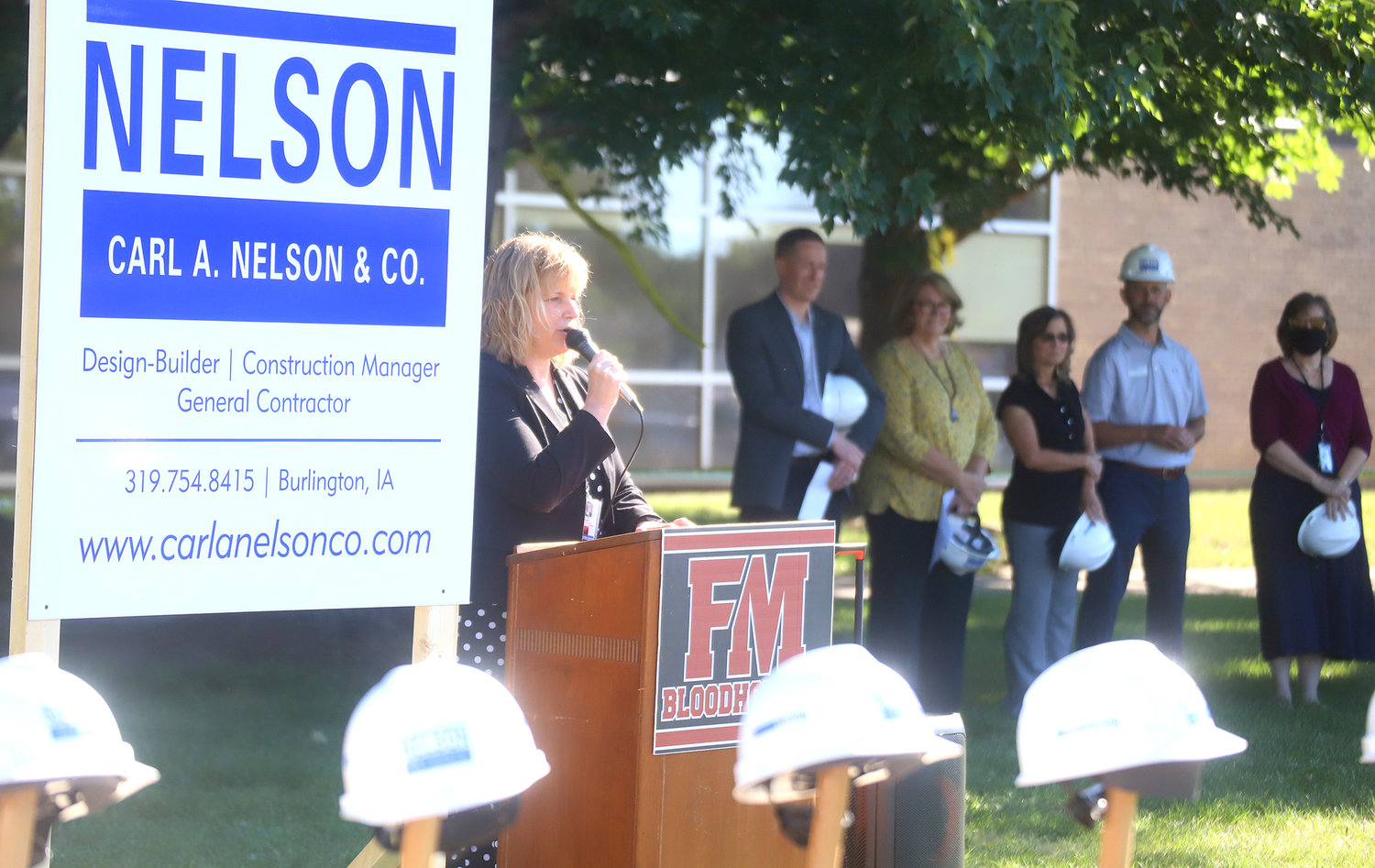 What a great day in the neighborhood. It's been a long time.”
Dianne Hope - Fort Madison School Board President
Chuck Vandenberg, Pen City Current Editor

FORT MADISON - Fort Madison school board President Dianne Hope threw dirt about 10 feet in the air with her gold shovel with a big smile on her face.
Hope has been part of the school board for most of the past referendums that have failed, five total, and each time said she was going to keep pushing forward to do what's best for Fort Madison students.
The district was breaking ground on two separate projects Tuesday morning, the expansions at both the Fort Madison High School and the Fort Madison Middle School.
When completed in 2024, the district's PreK- 6th grade students will attend school at the middle school campus, while 7th-12 grade students will attend the high school campus. All in, the project will cost the district about $36 million.
The district has made plans and reset plans and reset plans over the past six years to get to this point of construction beginning.
"What a great day in the neighborhood. It's been a long time," Hope said.
"I want to welcome everyone here. We have board members and others here who've worked very, very hard, not just us, there's been a tremendous amount of community support."
Hope thanked previous board presidents Timm Lamb and Tim Wondra for their leadership during the years of decisions."
She said Lamb first brought the board the suggestion of replacing the current elementary buildings.
"Thanks for this journey," she said.
Wondra led the board through decisions and indecisions and votes from the school board.
She also thanked other board members and former board members for their input during the past six years.
Superintendent Dr. Erin Slater thanked the community for their belief that the district wouldn't stop thinking about students.
"I'm so excited that we've had lasting partnerships that have made this day possible," said FMSCD Superintendent Dr. Erin Slater. We are so grateful for everyone who believed that no matter what, we were going to do what's best for kids."
Chris Smith, of Carl A. Nelson Co., said crews will be working diligently through the summer and fall for site preparation.
"The plan is to get the concrete foundations poured before cold weather this winter," he said.
"This is a very challenging project with all the additions being out in front of the school and in the main parking lot. We're going to sequence the construction to make this project as minimally destructive as possible."
He said the end goal would be to complete the facility and have the doors open in the fall of 2024.
Construction at the high school will require relocation of the entrance in the spring of 2023. Plans tentatively include moving the entryway to the east side of the building temporarily during construction.
Most of the funds for the work will come from borrowing against district SAVE funds through 2050 and Physical Plant and Equipment Levy funds. SAVE funds are the 1% sales tax revenues that come from purchases in the state that are collected and distributed to state public school districts.
DLR Group, headquartered in Omaha, Neb. is the district's architectural firm, and Carl A. Nelson Co., out of Burlington, is the construction manager, on the project.
A downturn in the construction industry and a weak bidding pool put the project off for more than a year as Carl A. Nelson and the district worked to get the best price on the construction project.
Voters turned down several referendums over the past decade to construct a new elementary school at the middle school, which would have included new sports facilities for the district. Despite getting more than 50% approval for a debt service levy to build the schools, the projects could never move forward because the state requires a 60% plus one supermajority to pass bond referendums.