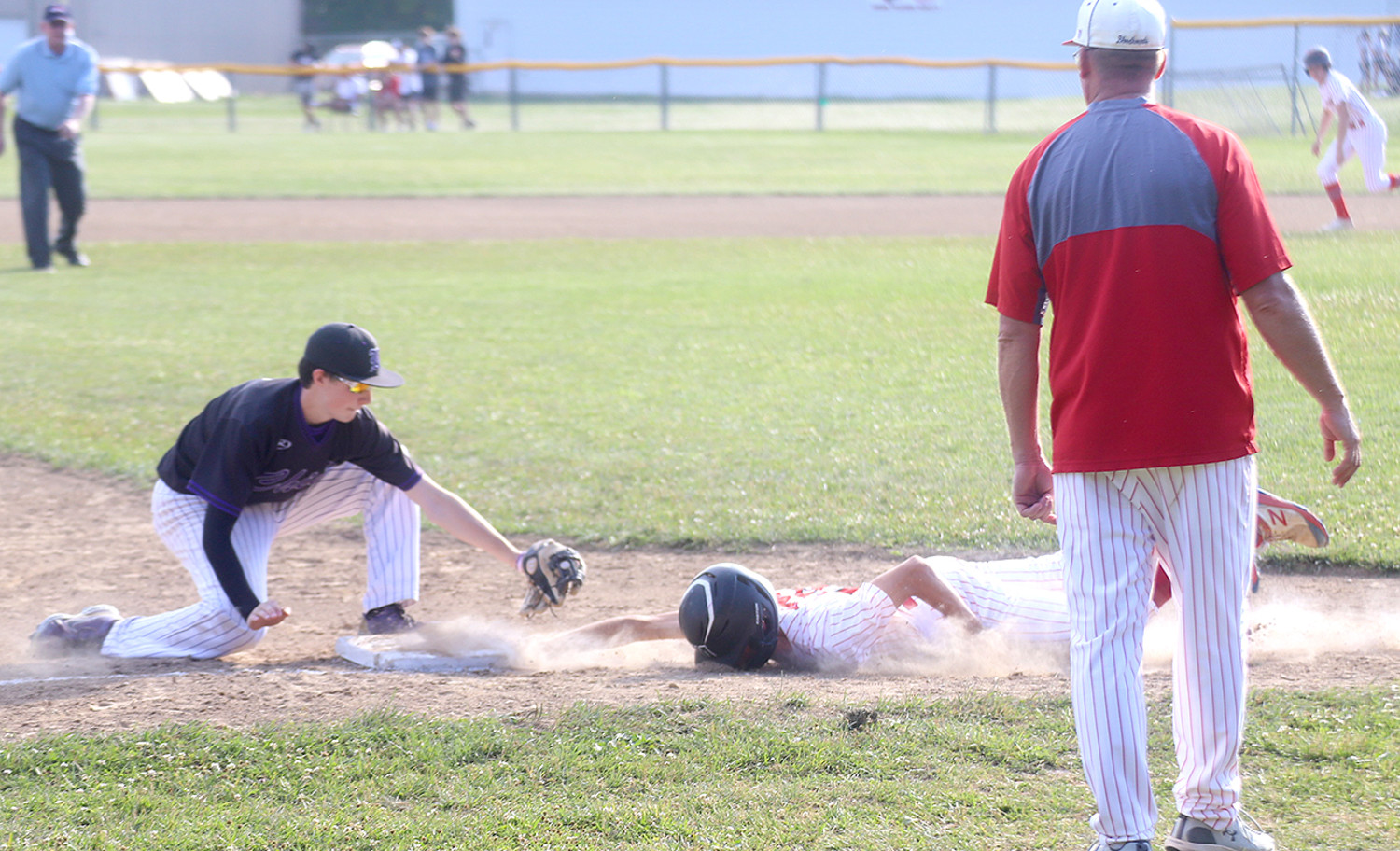 Fort Madison's Aiden Mitchell slides back into third safely after getting caught leaning on a pick-off attempt as Head Coach Ron Walker looks on from the third base coach box. The Hounds swept Keokuk 11-1, 5-1 in a doubleheader Monday night. Photo by Chuck Vandenberg/PCC
Posted Tuesday, June 28, 2022 2:46 pm
Chuck Vandenberg

Hounds wrap up regular season with No. 3 New London, Burlington and top-ranked Assumption

FORT MADISON - Fort Madison junior Kane Williams went 5-for-7 at the plate with four runs scored and and a couple RBI as the Hounds swept Keokuk 11-1 and 5-1 in a twinbill at Fort Madison Monday night.

Williams was 3-4 in the first game with two RBI and two runs scored to lead Fort Madison.

The Hounds held a 3-0 lead after three innings and then put up a four-spot in the bottom half of the fourth.

Aidan Pennock reached on 3rd strike passed ball and Landes Williams, who got the win on the mound returning after being gone all of last week, drew a walk to put two on. Kane Williams then doubled to left scoring Pennock and moving Landes Williams to third.

Reiburn Turnbull executed a squeeze bunt scoring Landes Williams, but Turnbull was thrown at first for the first out of the inning and a 6-0 lead.

Tate Johnson followed with a walk and Jordan Simpson plated Kane Williams on a sacrifice fly to left. Senior Matt Hopper singled to score Johnson before a fly out wrapped up the inning.

Fort Madison would put up a run in the fifth and then three more in the bottom of the sixth to set the 10-run rule.

Johnson opened the bottom of the sixth with a single off a 1-2 pitch to left. After a Simpson fly out, Hopper tripled on a line drive to center field scoring Johnson all the way from first. Aiden Mitchell then doubled to left scoring Hopper for a 10-1 lead. Caden Barnes' double scored Mitchell to end the game 11-1.

Williams went five innings without allowing a run and striking out three on two hits. Luke Hellige came on the six with a line of two hits, one run earned and strikeout. Hopper was 2-2 at the plate with two runs and 2 RBI.

In the second game, Hopper took the mound and went all seven innings allowing just one run unearned on seven hits and fanning four in the win.

Fort Madison held a 2-0 lead going into the third inning. Keokuk put up a run in the top half when Jordan Sisk scored on a fielder's choice ground out to short.

But the Hounds would answer with two in the bottom half. Johnson led off with his second double of the night and Simpson followed with an RBI single to center. After a strikeout, Caden Barnes wore a pitch and Simpson moved to third on a wild pitch. He would score on Pennock's fielder's choice to short to make it 4-1.

The Hounds would add an insurance run in the bottom of the sixth when Turnbull hit a two-out sacrifice fly to left scoring Kane Williams, who had doubled in the previous at bat.

Nick Profeta took the loss for Keokuk. He also led the Chiefs at the plate going 2-3.

The Hounds (13-5 Southeast Conference, 17-6 overall) take on Davis County tonight on the road in a non-conference matchup. They travel to New London on Wednesday to take on the Class 1A 3rd-ranked Tigers (21-0). They wrap up the busy week with a doubleheader on Thursday against Burlington and another at home Saturday against Class 3A No. 1 Davenport Assumption to close out the regular season.

The post season opens on July 8 when the Hounds host Oskaloosa (7-19) in a Class 3A Region 5 substate quarterfinal 7 p.m start. Fort Madison is the 3-seed in the regional bracket.

The winner of that game will face the winner of No. 2 Marion (19-10) vs. No. 7 Mt. Pleasant (7-16) in Marion on July 11. The substate bracket which includes top-seed Davenport Assumption, Washington, Fairfield and Keokuk in the top half, will have its final on July 13 with the highest seeded school hosting the game.

This year's state tournament for Class 3A and 4A will again be played in Iowa City starting July 18.