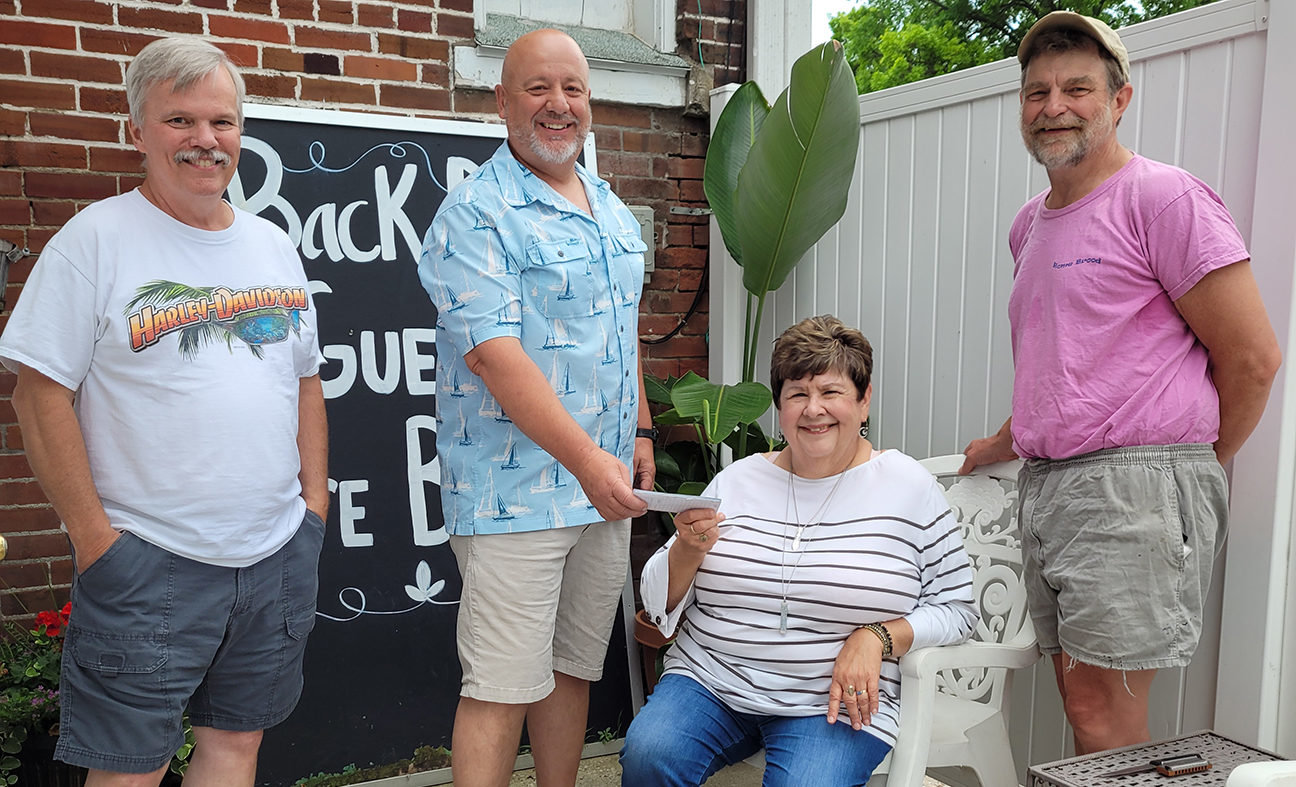 Jay Baldwin and members of the band Noisy Neighbors make a $500 donation to the Fort Madison Food Pantry Wednesday night. The group played for Holy Family Parish and donated the proceeds to help stock the shelves at the pantry. Photo by Chuck Vandenberg/PCC
Posted Wednesday, June 15, 2022 9:38 pm

Volunteers in need as clients have almost doubled from January

FORT MADISON - A perfect storm of sorts has the Fort Madison Food Pantry busier than they've been in a long time.

According to board member Lyn Cramer, the food pantry customer flow is up close to 100% since the beginning of the year.

"In January, the numbers we were seeing on average was about 20 clients per day. This month so far we have seen an average of 37, so we've almost doubled. As the month goes on, I believe we'll see that grown even greater," Cramer said.

In May she said the pantry was seeing about 31 a day.

Cramer, the former director of the pantry, said the community has been very generous with donations and funding, but she said the greatest need right now is numbers.

"The community has been so good with funding and donations, we're pretty good on that, but we sure could use some volunteers."

She said shifts are usually two to three hours at the pantry, or even spending an hour or so a week to help pick up food to deliver to the pantry. Also help is needed unloading trucks because of the increased demand.

"We could use a little muscle," she said.

Cramer said those interested could call out to the pantry and they can coordinate volunteer hours from there. The number is 319-372-8071.

She said Iowa Food Bank has been very helpful as numbers climb, but certain things like venison are becoming more and more difficult to get because even the Food Bank is having trouble.

"That's kind of unusual because we used to get a lot of that from the food bank and we don't have that anymore. But that should change as the season progresses."

Fruit and produce usually come from local grocery stores, but that isn't as plentiful as it has been because the groceries are having trouble, she said. But everyone is helping where they can.

She said inventories on site are still fairly strong, so anyone needing help with food insecurity should come out to the pantry at 3421 Avenue L.

As inflation continues to rise forcing prices up, Cramer said she thinks clients using the pantry will continue to increase and now it's becoming an issue of needing people to help with the increased demand.

At the beginning of June, the Food Pantry added some hours and is now staying open until 5 p.m. on Wednesdays.

"The maiden adventure of our extended hours happened last week and was met with great enthusiasm," she said.

"Each client walking through the Pantry’s doors related how happy they were with the new hours and how, without that extension, they would not have been able to be there.  They greatly needed help and now the Pantry was there for them."

The Pantry board had been wanting to extend hours, but the pandemic hit, putting any expansion of hours on hold.