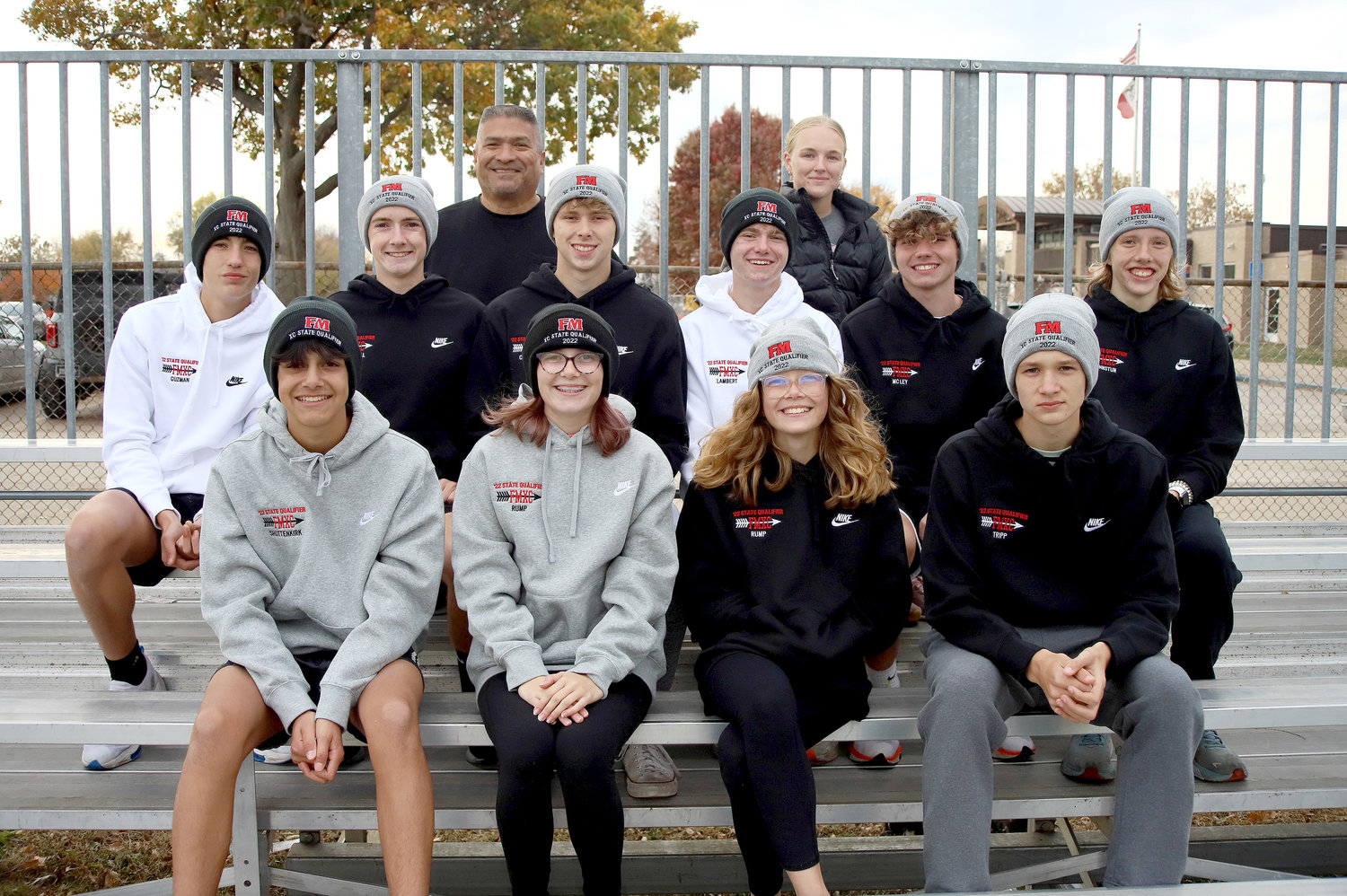 The Fort Madison boys cross country team along with Addison and Avery Rump, are making the trek to Fort Dodge Saturday for the 2022 State Cross Country meet. Five of the nine runners are freshman.
Photo by Chuck Vandenberg/PCC
Posted Thursday, October 27, 2022 8:28 pm

You gotta want it

We're ranked 15th out of 15 teams. If we finish 14th it's a celebration, man. And I told them all, if you wanna be like a Pella you have to want it. And if you want it I go from being Mendez to being Mean-dez”
FMHS Head Coach Brian Mendez
Chuck Vandenberg, Pen City Current Editor

FORT MADISON - Five freshmen and a cluster of underclassman are leading the Hounds hopes at this year's Class 3A Cross Country state meet.

Freshman twins Avery and Addison Rump will represent the Lady Hounds. Avery finished third at the qualifier last week, while Addison, who had been battling shin splints recently still managed a 14th-place finish to qualify.

The boys came from behind with about 400 meters left to move half way through the front of the pack at Washington Golf and Country Club to qualify with Mason McLey and Riley Tripp both finishing in the top 15.

McLey was 14th and Tripp took 15th place, but everyone was surprised when the Hounds were posted as third best team at the meet  knocking South Tama and Washington out of the top three.

Fellow freshman Nolan Guzman, and sophomores Payton Lambert and Jacob Shottenkirk will run along with Castielle Johnstun and Cameron Shutwell on Saturday.

But Avery Rump has positioned herself as the maybe the top dog for the Hounds. Rump has won multiple events this year and has placed in the top three all year including the qualifier last week where she finished a strong third 39 seconds off the pace of Mt. Vernon - Lisbon's Mason Lourdes.

Rump said she doesn't know much about the course or the competition and conversations over dinner have been about just having fun and doing their best.

"(Dad) hasn't told us much about the competition, but just trying to motivate us a lot and telling us to do our best and have fun," Avery said.

Rump said she's heard that runners like to get out fast at state, but she will try not to let that disrupt what she does well.

"I would like to say I'm going to try and run my race, but that's going to bother me so I really don't have any idea." Avery said.

"I would like to keep up with the other people. I'm not entirely confident I will be able to do that, but I'll try my best to stay up there." she said.

Addison said the two probably won't see each other very much on the course.

"You could do that," Avery said with a chuckle.

Avery said the qualifiying hasn't set in, but Addison said reality will set in Thursday and Friday night.

Avery said her expectations are to finish in the top 15, but if she really "wanted to push her luck" would hope for top 10.

Addison said the race was just about having fun and enjoying the moment.

"Maybe a somersault over the finish line. Finish with a little pzazz," she said with a laugh

Head Coach Brian Mendez said there was nothing the kids can do this week to better position themselves for Saturday.

"The hard part is already been done. Live in this moment. There's no guarantees we get them," he said.

"We did some speed work and some long runs, but nothing too heavy."

On the boys side, Fort Madison has been pack running all year. They did that last week and were jumbled up in the middle of the pack most of the way through, but the last 400-800 meters McLey and Tripp took off, as did Shottenkirk.

Guzman said at the beginning of the season the boys were barely getting by with their miles, but he said one tough workout made them realize a change had happened.

Guzman was more excited than anyone coming off the qualifying course in Washington because Tripp and McLey had made state.

"I was excited for my teammates to make it as a freshman. But I also had a really good race and set a PR by almost 40 seconds," he said

McLey said nothing has really changed in his mind since qualifying seven days ago.

McLey said he's been battling a cold but nothing is going to keep him from running Saturday.

"it's the last race as a team and we'll all go as fast as we can and go all out," McLey said.

"The last meet we tried to slow down a bit out of the gate by about 10 seconds and it went way better for us. So we may start out a little slower and then catch people as we speed up."

McLey said he didn't expect the whole team to qualify, but it doesn't change the plans to stick together and push each other.

Tripp said having the whole team does change things a bit, because now it's also a focus of points.

"We were just going up the two of us, and we weren't worried about points for the team. But now with the whole team going we may focus more on getting points," Tripp said.

"I think we just go up there and try to do our best."

Mendez said the great thing about it all is the youth that's representing the school. He said all the  kids have a chance at three more years despite what happens Saturday.

"And I told them all, if you wanna be like a Pella you have to want it. And if you want it I go from being Mendez to being Mean-dez."