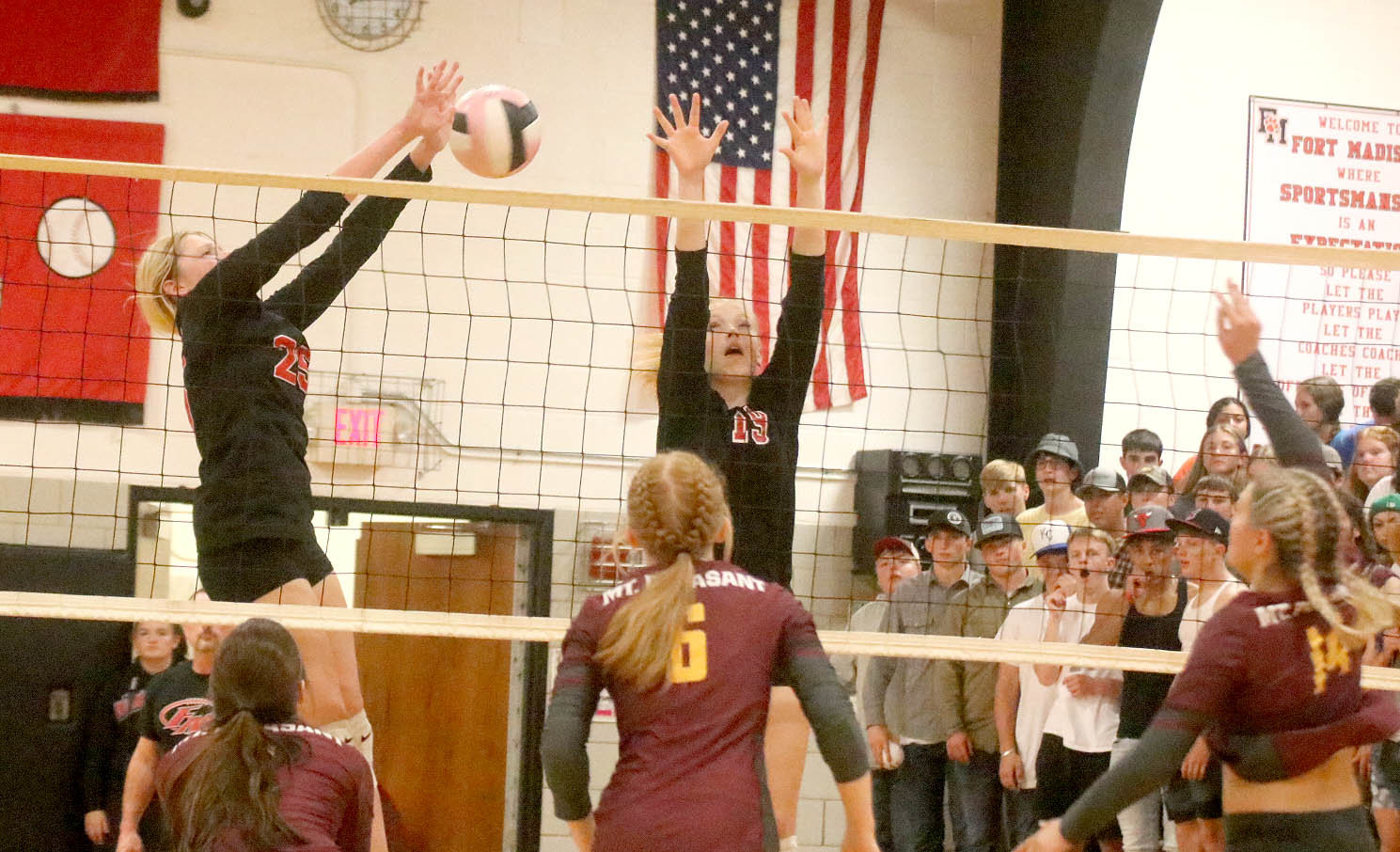 FORT MADISON - Volleyball is about a lot of things, but but one of the biggest is big swings.

Fort Madison forgot that at times Tuesday night on senior night with four seniors making what could have been their last appearance at the HoundDome in a four-set loss to Southeast Conference foe Mt. Pleasant.

Under first-year head coach Kelly Knustrom, Fort Madison has taken bites out of every team in the loop this year and has beat Fairfield outright and Burlington twice.

Mt. Pleasant recorded just four kills in the first game win. Aside from three aces and a block early on at 2-3 the rest of the points were on errors by the Hounds. Those errors played on the minds of Fort Madison as the match wore on.

Repeated swings that found the net or went long, had the crimson and black resorting to a more casual style of play pushing shots over the net trying to find holes rather than trying to end points with big swings.

Knustrom said she has full confidence in the girls to execute offensively, they just need to find that confidence themselves.

"I try to tell them you have a 50/50 shot. You hit and it either goes in or out. But be confident and go up drastically. Let loose and play," she said following the loss.

"If we can cut back on our errors, we can play with anybody. It's a lot of mistakes were making and it's just confidence. The kids aren't 100% confident in themselves. But we're working through those things. I have the utmost confidence in this team and if they can buy in and believe in themselves we can do a lot of really good things.

In the first game there were five ties before anyone reached eight points, but then the Panthers quickly pulled way as Fort Madison's Aija Jenkins, Anna Lynk, Alaina Simpson, Taylor Johnson, and Eve Ruble tried to get their bearings in the middle and outside spots. Lynk would get a kill at 20-11 but the game was out of reach by then.

In the second game, the Hounds jumped out to a 4-1 lead on a double hit violation. Mt. Pleasant would come storming back to tie the match at 6, 7, and 8. and then pull away for seven-point lead at 17-10. Lauryn Helmick would score three straight from the service line with help from a kill by Johnson to cut it to 13-17.

Helmick would misfire on her next serve, but Fort Madison would then rip off seven straight on four errors at the net by the Panthers to take a 20-18 lead. Mt. Pleasant would tie it up at 20 on a kill by Andrea Lopreato. Molly Knipe would get a kill and Lapreato would serve long to give Fort Madison the win.

The third and fourth games both found the Hounds within one point at 18-19, but Fort Madison couldn't muster up a run in either game to force a tie breaker.

Knustrom said the difference was that Mt. Pleasant played through their mistakes and Fort Madison lost a little confidence in their game.

"That was a huge thing. You could tell. Mt. Pleasant did a great job. They made mistakes, too, but they kept swinging at us," she said. "One mistake doesn't make or break the game. Keep swinging and have faith the next ball is going to be your ball - and go for it."

Knipe was 9 of 11 serving with four aces on the night and nine assists. She had seven aces Monday night against West Hancock. Simpson was 12-19 attacking with seven kills Tuesday and had 15 digs. Lynk was 15 of 19 hitting with four kills.

The Southeast Conference volleyball tournament starts Tuesday Oct. 5 and the Hounds play in the Durant Tournament that weekend.