Hounds' season kicks off with battle for county seat 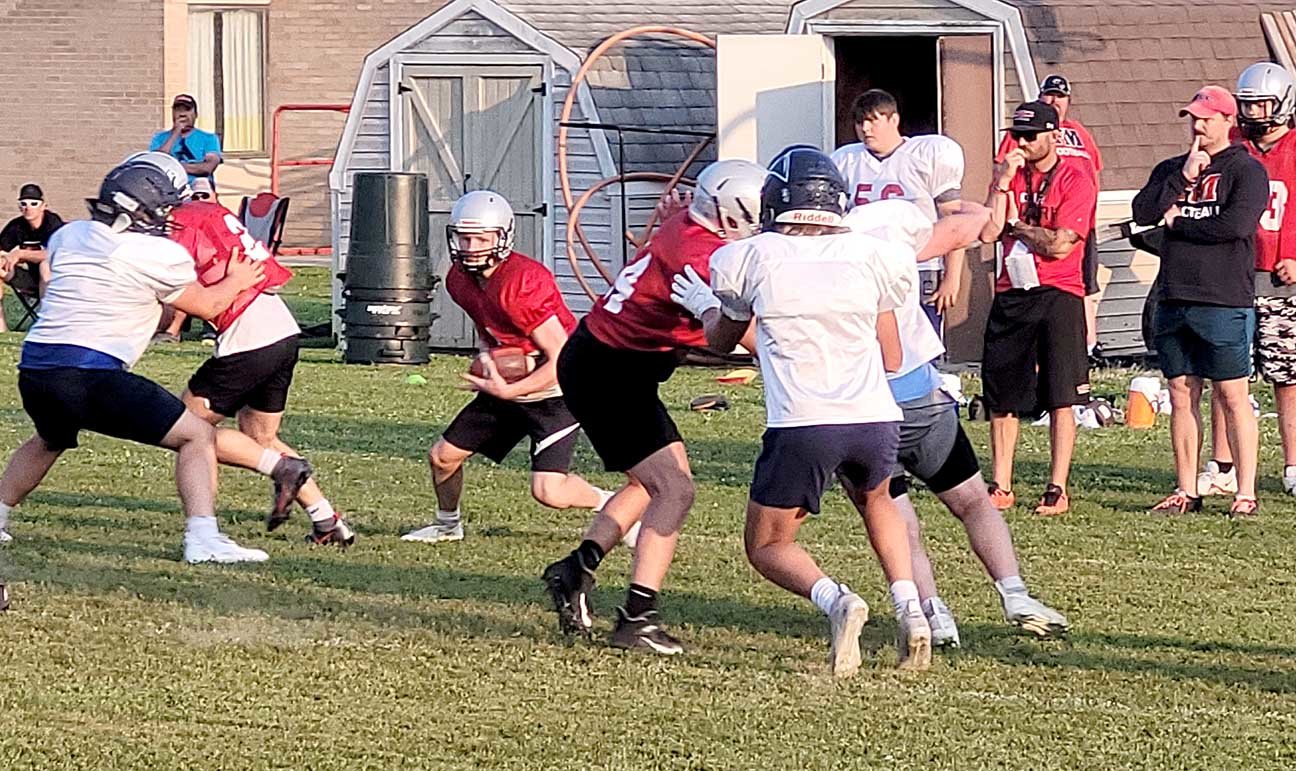 FM quarterback Landes Williams breaks through the line in a drill earlier this month in Fort Madison. The Hounds open the season Friday with a 7:30 p.m. game for the county seat against Keokuk. Photo by Chuck Vandenberg/PCC
Posted Thursday, August 26, 2021 5:00 pm

That's the mantra Doherty is carrying into his third year as head of the Fort Madison football program - a year he says he's bringing in a brand new team.

"That's been the message - we've gotta be us. That was last year's team, and this year's team has to be us. If we're not us, anybody can whip our butt. If we're us, we feel like we're a competitive football team," Doherty said Thursday.

The season kicks off at 7:30 p.m. Friday against county rival Keokuk. The rivalry is as hot as ever and usually the game is played toward the end of the season. But with redistricting taking place in the off-season and Fort Madison climbing into Class 4A, the game was set for the opener.

"It's a rivalry game right at week 1. I think it's great for the area. I love this time of year. People are excited and the fact that we're in the same county and there's a chair, it just makes it fun," Doherty said.

Both the Hounds and the Chiefs are in a sort of rebuild mode, but Doherty said that's part of high school football. Fort Madison finished last year 7-2 with a 35-0 loss to Grinnell ending the year.

The Chiefs bring back Equilius Lee at running back, a quick slasher of a back, and the line will be anchored by Trace Hackaday, a 6'5" 250 senior who's quickly grabbing the attention of many at the college level. Hackaday was recently listed in the top 40 Iowa high school college prospects by the Des Moines Register.

"Hackaday's a dude and seems to be the real deal. But we gotta do what we gotta do. The hype is there and he's earned that respect, but we gotta believe in our kids and believe we can get the job done," Doherty said.

The Chiefs' offense was entirely quarterback Corey Skinner who amassed almost 2,000 total yards last year and scored 23 of the Chief's 29 offensive touchdowns. This year Keokuk will either turn to Bryor Lindner or Lucas Swainey, a left-handed sophomore to lead the offense.

Keokuk went 4-4 in 2020 missing one game along the way. Washington ended Keokuk's season with a 47-6 loss in the second round of the Class 3A playoffs, after the Chiefs beat Fairfield to open the post season.

Lee led the Chiefs in yards per carry at 7.8 and had close to 300 yards total but failed to reach the endzone.

Fort Madison will bring back three returners to the offense led by quarterback Landes Williams. Williams will enter his senior year with some lofty numbers after taking over calling signals in the third game last year. Williams threw for close to 750 yards and 12 TDs against three picks. He also ran for 445 yards and nine scores.

Senior Tate Johnson will be a threat on both sides of the ball. Johnson hauled in seven touchdowns in 2020 with a whopping 20.4 yards per catch. He also had 43 tackles, and returned both a fumble and an interception for touchdowns.

Senior Austin Ensminger and junior Tanner Settles will help anchor the Hounds defense. The two combined for 90 tackles last year and Settles was all over in the backfield recording eight tackles for losses.

On the offensive side, seniors Jakob McGowan and Gavin Wiseman will provide some options out of the backfield as will sophomore Teague Smith. Junior Kane Smith will give the Hounds some depth at wideout along with Xander Wellman, Miles Dear and Mikey DiPrima.

Wellman will also handle the kicking and punting duties for the Hounds.

Doherty said the Hounds will go into week 1 trying to find their identity and seeing who steps into roles, especially on the offensive and defensive fronts. Junior Mateo Lozano will be anchoring the lines for the Hounds. Lozano started both sides as sophomore last year.

"We're still filling that hole now. We've got some guys that are neck and neck," Doherty said. "We're not big and we won't impress you on paper. We didn't do that last year, either, but our kids are strong and if you play at a good pad level and you do the systematic things it puts you in an advantageous situation.

"It's not just about body mass. Height and weight look good on paper, but I don't get caught up in it. We think strong is strong and fast is fast, and we've got a job to do."

Doherty kept any surprises close to the vest, but said the whole team has shown up in the preseason. With 85% attendance from players at athletic enhancement, Doherty said there will be some heavy competition for varsity action this year.

"It sounds cliche, but the whole team has surprised me. We've obviously got a couple key guys back, but Miles Dear is looking really good. I like how he's matured and Teague Smith, we knew we had a dude there, He's not just a workhorse, he's smart. The best thing about him is he wants to be good. He doesn't wish to be good, he's working for it and that's a huge difference," Doherty said.