Fort Madison getting sniffed as top-10 program again this season 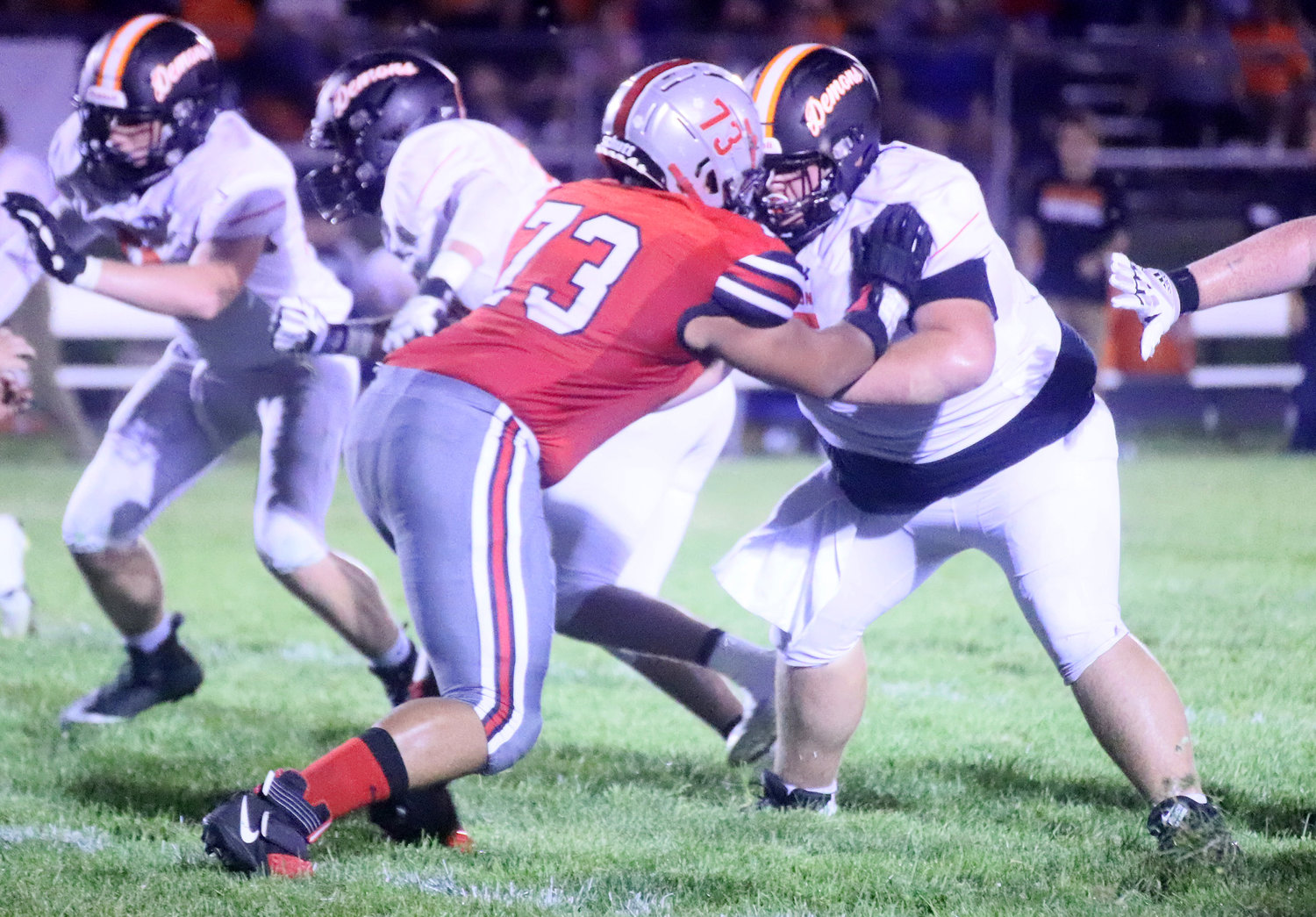 Fort Madison sophomore Cory "CJ" Arnett has stepped up in a varsity role on both the offensive and defensive sides of the ball. Arnett and the 4-0 Hounds play host to Mt. Pleasant on Homecoming Friday night
Photo by Chuck Vandenberg/PCC
Posted Wednesday, September 21, 2022 6:12 pm

Henry Wiseman got another touchdown Friday night, but he doesn't get that if Leif Boeding isn't holding his block downfield. We're very physical there and Coach (Justin) Menke has been preaching that from the beginning. We might get some holds for being that aggressive, but that's football.”
Derek Doherty, FMHS Head football coach
HOMECOMING

FORT MADISON - The script for the Fort Madison football team is getting pretty consistent.

Fort Madison has started 2-0 for the past seven years and went 6-0 in 2021, cracking the top 10 for the first time in more than 12 years, only to lose the final three games of the season.

They will put their 4-0 mark on the line at Homecoming Friday night at Richmond Stadium's Youel Field against Mt. Pleasant (0-4).

The Panthers boast the top passing quarterback in Class 4A in terms of yardage with Jacob Richtman. Richtman has 1,068 yards and nine touchdowns on the year, which indicates the Panthers aren't afraid to air it out.

"Danger comes to mind," he said. "A quarterback that's putting up those numbers and they're not afraid to throw the ball. They're willing to be dangerous and, offensively, they have the stats."

But Fort Madison's defense is up to the task and has found ways to stay there even when trailing as they did in the first three games of the year.

The dawgs have a combined 14 sacks and 31 tackles for loss on the year. Fort Madison has six kids with more than 10 tackles and are swarming to the football, which is a very Bloodhound-traditional defense.

"Without him, you don't have a guy like Hayden Segoviano getting 12.5 tackles Friday night. And Hayden will be the first one to tell you that."

Doherty said defensive coordinator Jason Crooks makes the system simple for the Hounds, allowing play that is fast and physical.

"And it's showing with those stats. They're great, but we have to continue to do it with these tougher games coming up," Doherty said.

"We know what we're capable of and have to continue doing it."

The Hounds wrap up the regular season at home against Burlington. Burlington and Fort Madison both received votes in this week's AP Iowa High School top-10 rankings.

Doherty said some fresh faces on the defense are making a name for themselves including Cory "CJ" Arnett and Brody Cashman.

"CJ, we were just talking about him in practice and he's really bloomed. I wouldn't want to have to deal with him at nose. He's extremely physical and very athletic for a big guy," Doherty said.

"He just wants to play football. He wanted to play jayvee on Monday, but we couldn't let him do that and he was a little bummed. But that's just how much he loves football."

Doherty said Cashman doesn't know how good he is.

"I wish he understood that. We're still working with him and he's extremely athletic. I don't know if his belief system is full yet in himself, but he's getting better. He's putting in the work and starting to reap some of those rewards."

Cashman had a pick Friday night and Doherty said he came back to the sidelines saying he should have taken it back for a touchdown.

He has completed more than 70% of his passes and his hit four different receivers for touchdowns. Those same four recievers have more than 100 yards on catches on the season.

Doherty said a lot of that credit goes to wide receivers engaging and holding blocks.

"Henry Wiseman got another touchdown Friday night, but he doesn't get that if Leif Boeding isn't holding his block downfield," Doherty said.

"We're very physical there and Coach (Justin) Menke has been preaching that from the beginning. We might get some holds for being that aggressive, but that's football."

Doherty said the Panthers, who aren't as big as they have been in the past, will set up in blitz packages most of the time.

"They blitz 90% of the time with inside and outside pressure, they're mixing it up and pinning their ears back saying here we come. We have to prepare for that danger," he said.

Richtman only has 26 yards on the ground so he's not the dual threat that the Hounds have faced all year. However he's not afraid to tuck and run with 24 carries on the year.

Zerek Venghaus has 138 yards on 28 carries and a couple touchdowns to lead Mt. Pleasant out of the backfield.

Fort Madison is led by Teague Smith on the ground with 297 yards and three TDs. Smith is grinding out the yards at about 4.5 yards per attempt.

Hayden Segoviano continues to lead the Bloodhound defense. With his 12.5 tackles Friday night against Washington, Segoviano has 31.5 tackles on the year, three sacks, and 6.5 tackles for loss.