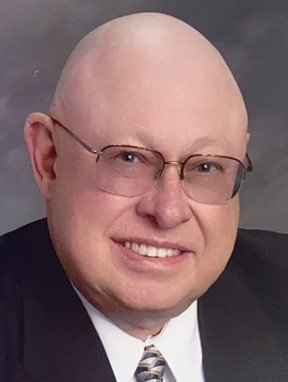 Doyle Hoyer passed away peacefully on August 6, 2022 in the company of his family.  He was welcomed into eternity by his beloved wife, Bert, and countless family and friends gone before.  Doyle touched the lives of so many with his gracious smile, extended hand, and contagious laugh.  To say he will be missed is an understatement.

Doyle was born in Fort Madison, Iowa on April 1, 1936.  Throughout his 86 years he enjoyed many jokes and tricks with family and friends for being born on April Fool’s Day!  It was a source of fun and games coupled with some goodhearted laughter and teasing as we celebrated Doyle’s landmark birthday every year!  His parents were Willis and Viola (Grossenkemper) Hoyer who enjoyed their entire lives in Fort Madison.  Willis was an only child who worked as a laborer at Crandon Paper Mill on the riverfront.  Viola was a homemaker who helped with alterations at Glasgow’s in her later years.  Doyle cherished his little sister and only sibling, Connie (Hoyer) Barnes, founder of Fort Madison’s Under the Sun, who predeceased him several years ago. Doyle graduated from Catholic Central High School in Fort Madison.

Ever the musician, Doyle started the Doyle Hoyer Orchestra in high school, playing dances, weddings, and parties for the next twenty years!  He played tenor sax, sang lead vocal, and always knew how to get the party started!  Many couples throughout Southeast Iowa remember Doyle singing the first song on their wedding night!  He played as many as three or four nights each week until he retired from performing in 1970.

The fairytale story of Doyle and Bert began in 1956.  He was the leader of the band, and she was the sweetheart of the dance!  It was love at first sight!  Their engagement followed shortly thereafter on Christmas Eve night in Riverview Park.  They married on June 29, 1957 and headed for Colorado with a handful of dollars in a 1954 Olds that drank oil.  He kept an extra case of oil in the trunk to add as needed along the way.  It was a grand time indeed.

Doyle and Bert made their home in Fort Madison in a small trailer parked in his parent’s back yard.  Gary arrived in 1958, the first grandchild on either side of the families.   Soon they moved across the street to their first home where they remained for over 16 years.  Jeanne (Hoyer) Deery appeared on the scene in 1961.  Jan (Hoyer) Randolph joined in 1969.  Life was good!

Doyle worked three jobs during the early years.  He started at Glasgow’s Clothing Store just after high school, giving up a job as a butcher at Greenwald’s Grocery.  When he was not playing in the band, he worked door-to-door selling mutual funds most evenings.  In 1965, he purchased 20% of Glasgow’s from good friend Charley Zimmerman, and acquired the remaining 80% in 1968.  Doyle and Bert owned Glasgow’s for the next 33 years, with Jeanne and Jan joining them after college graduation. Glasgow’s was the center of his world, and a mainstay of downtown Fort Madison.  He carried the coveted brands of the day, including Johnny Carson, Hart Schaffner & Marx, Jack Nicholas, Levi’s, Ralph Lauren Polo, Tommy Hilfiger, and countless others.  He helped create a centralized buyer’s group for men’s retailers throughout the Midwest and sought out new markets as he began a women’s and men’s retail and wholesale fur coat business.  Doyle loved his customers and his customers loved him!  The best part of the business was that the whole family worked together hand in hand in all aspects of the retail clothing scene.  Doyle’s friendly hello and easy demeanor were legendary, and Fort Madison remained for over 50 years the source of great suits, slacks, furs, and warm welcomes.  Every customer would walk away convinced that they needed at least one extra tie!  Doyle’s natural sales ability was used as an example in several of his dear friend Zig Ziglar’s many best-selling books about the art of selling to achieve success in business and life.

In 1977 Doyle and his pal Jim Baier purchased Iowa State Bank in Fort Madison. It was a business venture that started an incredible friendship and partnership for decades to come.  Doyle and Jim soon sold Iowa State Bank and purchased Fort Madison Bank & Trust Co. the very next day.  Now known as Connection Bank, Doyle and Jim grew their banking business beyond the borders of Fort Madison, where the business now also operates in Burlington, Keokuk, and Montrose.  Doyle and Jim remained loyal not only to each other but to their many customers and employees.  Even in this day of contracts and fine print, Doyle and Jim never signed a partnership agreement and they never had an argument.  The banking business for both families was founded on handshakes and mutual respect.  Doyle lost his best friend Jim just ten months ago, but their joint legacy and partnership will continue forever.

Through the years, family has been the key to life in the Hoyer home.  Strong family values have been the very fiber of day-to-day life.  How rare it is to be able to have your parents as your best friends?  Bert and Doyle enjoyed cheering on the Fighting Irish with Gary at Notre Dame and beamed with pride as Jeanne and Jan were both crowned Miss Iowa USA.  The entire family traveled together to root for them at both national Miss USA pageants! Those bonds of strength through family drew all three of Doyle’s children back home to Fort Madison so that their children could experience the warmth, strength, and encouragement of a truly close and loving family. The example was set by Doyle and Bert and continues uninterrupted.

The highlight of Doyle’s life can be found in the smiles of his ten grandgirls!  They have been his life and inspiration.  He cherished every minute with each of them, always asking about their plans, their ambitions, and their boyfriends!  He was so proud, so interested, and so very engaged in their many triumphs.  The grandgirls were indescribably special to the very depth of his soul.  Lynn and the two Brads were never in-laws, they were always family to Doyle.

Doyle loved family vacation trips to the Ozarks, his Nauvoo cabin, and his boats that zipped around the mighty Mississippi.  Those great adventures were the foundation of the countless stories of fun times.  It did not matter where we found ourselves, as long as the family was together.

Doyle lost Bert to cancer in 2001 after a monumental battle.  It was the end of a great love affair, a true partnership in business and life.  While cancer can often destroy families, it became a source of strength for the Hoyer’s. Family bonds grew stronger guided by examples of love, faith in God, and deep caring for one another.  So much of Bert’s life continued through Doyle and has been passed on to the grandgirls and their families.

Another great highlight of a life well-lived occurred when Doyle’s longtime friend Fr. Bob Spiegel arranged a visit to the Vatican.  Doyle found himself and his great friend Joe Simmons holding the hand of Pope John Paul II in his private chapel. This moment was followed by an overnight stay in the Vatican’s Cardinal College residence that is typically reserved for traveling Cardinals and Bishops.  Doyle was truly moved by the Holy Spirit as he felt the warmth and tranquility of Pope Saint John Paul the Great who was canonized to sainthood in 2014. His papal visit gave new hope and vitality in Doyle’s life shortly following the death of his beloved Bert.  Throughout his life Doyle enjoyed the loyal friendship of numerous priests, particularly lifelong friends Fr. Bob Spiegel, Fr. Tom Spiegel, and Fr. John Spiegel.

Doyle was blessed with another great love in his life.  Kay McGushin was welcomed into the family nearly twenty years ago.  With many great travels and fun times together, she has been Doyle’s strength and steadfast companion.  Our truly wonderful, caring, and loving Kay will always be part of the family. Kay has loved each of the grandgirls as her own and she has been a tremendous example of kindness, patience, and love for almost two decades.  Doyle’s biggest and best smiles were watching Kay cut a rug on the dance floor even if he was just watching from the sidelines!

Doyle was ever-generous to his community, always eager to share his time, talents and treasure.  He has been a major benefactor to countless causes, either as a leader or anonymously from the sidelines.  He served on countless boards and organizations, usually in a leadership position.  For years he was involved with the Chamber, Community Club, Downtown Merchants, Fort Madison Economic Development, the local Catholic schools, Knights of Columbus, Jaycees, YMCA, RecPlex, and more recently the Marina and Pickleball court projects in Fort Madison.

In 1993, Doyle, his son Gary, and Randy Winegard started conversations about bringing a riverboat back to Fort Madison.  Soon the Catfish Bend organization was seeking investors, with its grand opening in November 1994.  Doyle became one of the founding members of Catfish Bend and has served on the Boards of Directors of Catfish Bend Casino, Great River Entertainment, Grand River Jackpot, Washington County Casino Resort, Elite Casino Resorts, and Riverside Casino & Golf Resort.

Doyle made his mark on his family, his friends, and his community!  It was a life well-lived filled with joy and love.  Doyle contributed in countless ways.  He paid attention to people and was a friend with an easy smile that made everyone feel important and valued.  Life was always celebrated with laughter and fun.  Hard work came naturally, and devotion to his faith was a constant ingredient in his daily life. Doyle always made time to show every employee, friend, relative, child, and grandchild that he loved them. He will forever be remembered for his kindness, empathy, and caring soul.  If everyone who’s life he touched joined together with a candle in hand, the brightness of his impact would rival the sun.

A visitation will be held from 4:00 p.m. to 7:00 p.m. on Thursday, August 11, 2022 at Ss. Mary & Joseph Church in Fort Madison.  The funeral mass will be held at 10:30 a.m. on Friday, August 12, 2022 at Ss. Mary & Joseph Church with Revs. Robert, Thomas & John Spiegel officiating.  Burial will be at Oakland Cemetery in Fort Madison.  A luncheon will be provided following the funeral mass and burial at McAleer Hall, right across the street from the church.  A memorial has been established in Doyle’s memory.  Online condolences to Doyle’s family may be left at the King-Lynk Funeral Home & Crematory website: www.kinglynk.com.  King-Lynk Funeral Home & Crematory is handling the arrangements.