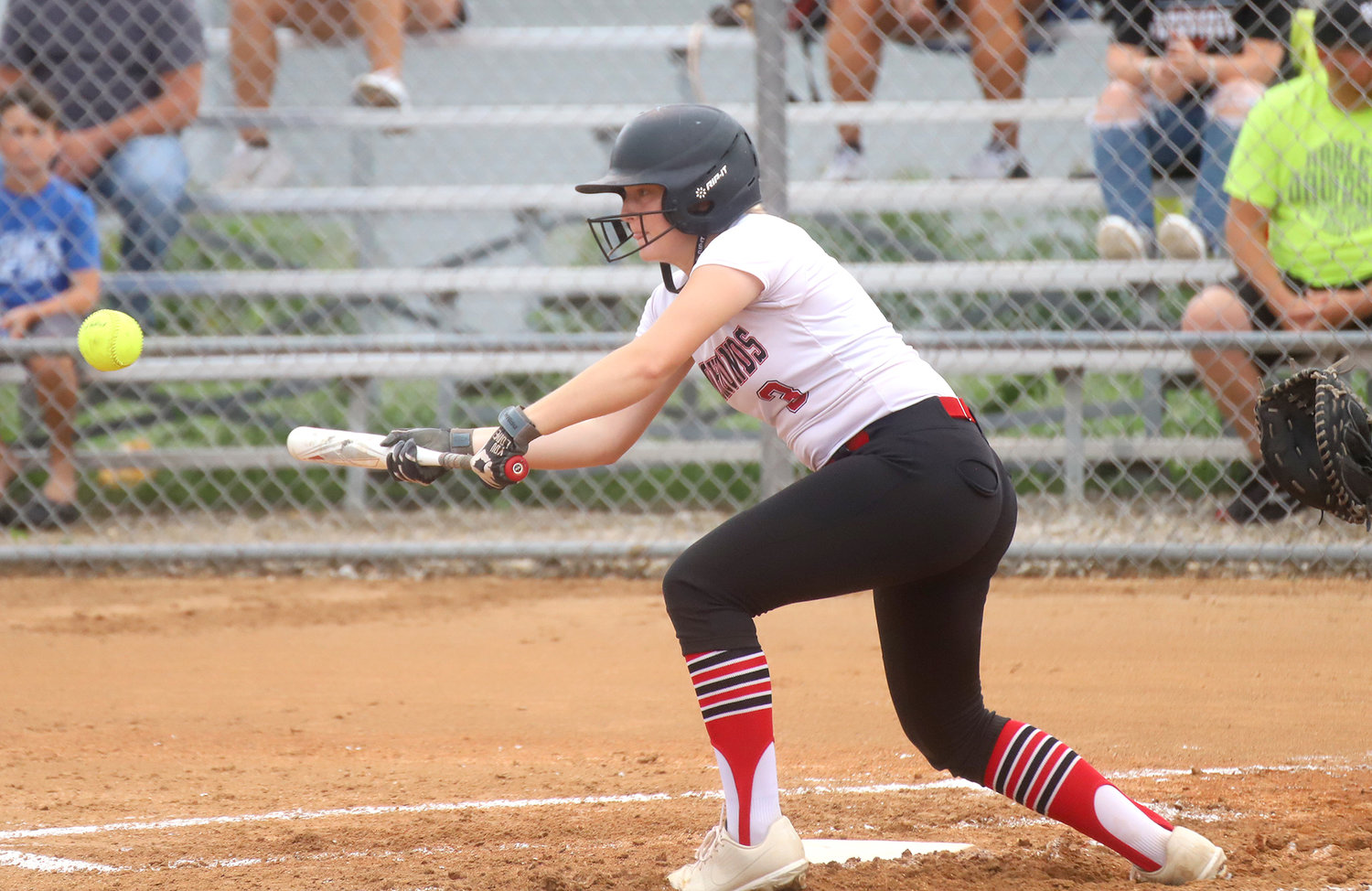 Elle Ruble lays down a sacrifice bunt in the bottom of the second inning in Fort Madison's 5-0 win over Keokuk in Class 4A Region 7 quarterfinals Friday in Fort Madison.
Photo by Chuck Vandenberg/PCC
Posted Saturday, July 9, 2022 5:42 am 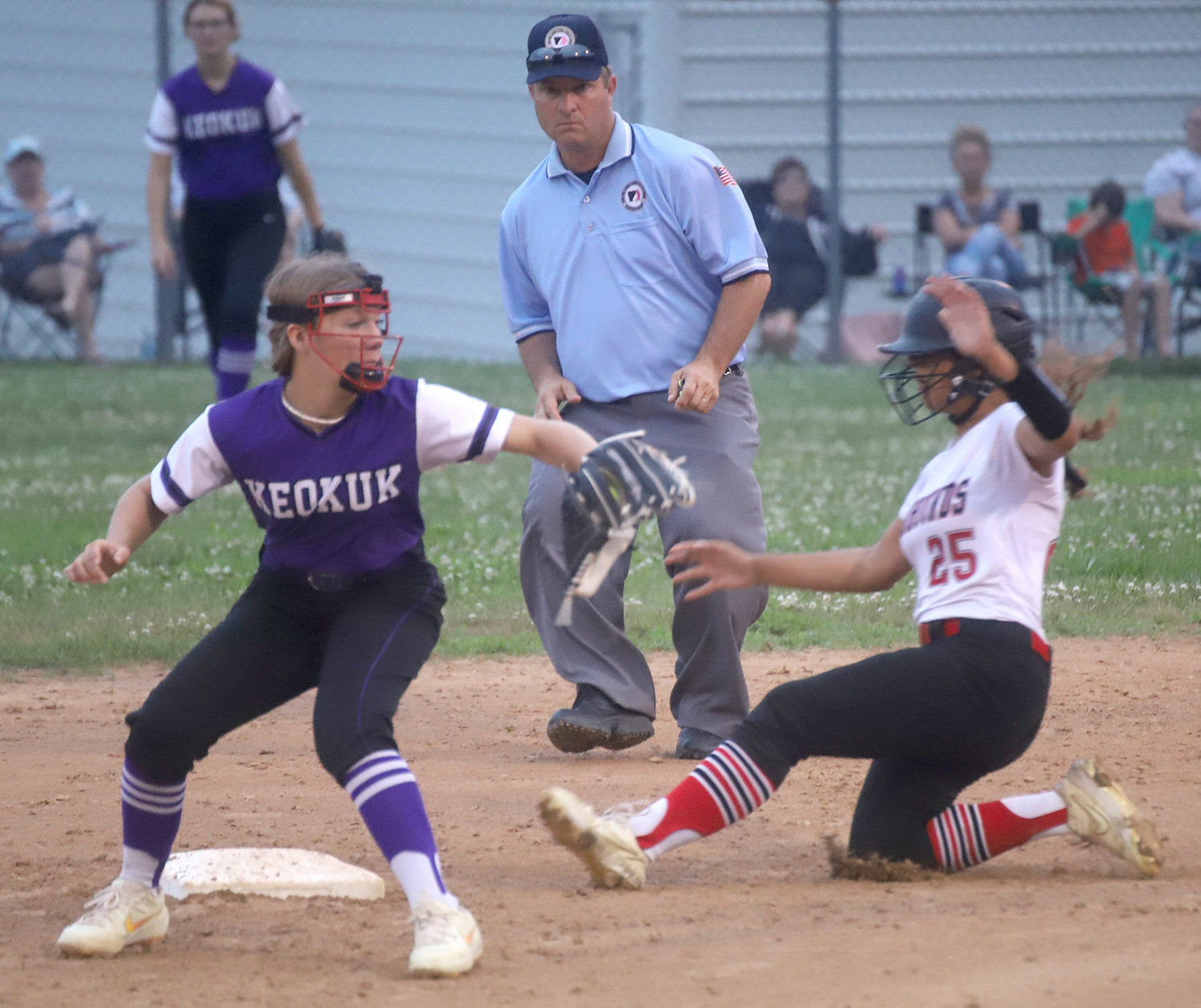 The Bloodhounds Olivia Buckner slides into second ahead of a throw in Friday's 5-0 win over Keokuk.
Photo by Chuck Vandenberg/PCC
Shutout

I was nervous, but you have to go in with the mentality that this is just another team and you've never seen them before”
FMHS junior Neeley Rehm
Bloodhounds advance to regional semis

Fort Madison will face off against Burlington in the semifinals of Region 7, Class 4A action Saturday night in Burlington.

FORT MADISON - Neeley Rehm said she approaches every team as a new team that she's never seen before and that approach seems to be working of late, as Rehm and the Lady Hounds shut out Keokuk in Class 4A Region 7 post-season softball action Friday night.
In a game that was postponed from Thursday, Fort Madison jumped out to a small early lead and Rehm held the Chiefs scoreless as Fort Madison rolled to a 5-0 win to start post-season action.
Rehm struck out a career high 11 in the seven-inning affair, while giving up just two hits and no runs in the quarterfinal win.
"Just right before this last inning we were looking at her pitches and in travel ball they throw a lot, She's been over thrown in the past, and back then I wanted them to back her off, but she's prepared now for that," Head Coach Jared Rehm said.
The Bloodhounds now travel to Burlington for the Region 7 semis for a Saturday 7 p.m. start.
Despite the Bloodhounds four wins over Burlington and a better overall and conference record, the Bloodhounds got the short end of the stick in the regional pairings, while Burlington caught the first round regional bye.
"I dont' know what happened. We had just won a couple games at the Linn-Mar tournament and had swept Burlington in a doubleheader and we end up traveling as a No. 4 seed to Burlington," Rehm said.
"It was just timing. We were literally in Linn-Mar playing Xavier and they (Burlington) weren't playing and it was like how did we get here?!," Rehm said. "Even coach (Kyle) Doherty was questioning how we didn't get a bye in the first round, At that one moment in time I guess they were one game ahead of us."
Fort Madison got on the board early when Lexi Whaley doubled to left field on a liner right down the third baseline to score Emily Steffensmier from second to open the scoring. Freshman Ada Wood, a lefty in the circle, would hold Fort Madison down until the 5th inning when Fort Madison put up two runs in the fifth and two runs in the sixth to advance.
Jared Rehm said the Bloodhounds responded well after the slow start.
"I don't necessarily like it, but I like how they  responded to it," Rehm said. "So we jumped out in the first inning and then nothing for several innings and then another one or two good innings."
Neither team would put up any runs in the 2nd through 4th innings, but Fort Madison would get to Wood in the fifth.
Erika Kruse would walk to open the bottom half of the fifth. Lexi Whaley who hit the ball hard in all four plate appearances singled to left and everyone moved up on a throw that got away in the infield.
Rehm then singled scoring courtesy runner Olivia Buckner. Whaley would get called out at the plate trying to score from second. Lauryn Helmick would double to center in the next at bat to put runners at second and third and then McKenna Cashman hit a sacrifice fly to to center scoring courtesy runner Jaycee Fullenkamp from third on the tag.
Rehm would give up just a walk in the top of the sixth and then Whaley would  score Logan Johnson on a sacrifice fly to center before Rehm would pick up her second RBI of the night on a single to right field scoring Emily Steffensmeier for the final run at 5-0.
Rehm, who threw 106 pitches on the night said she's ready  for a Grayhound squad that got the bye despite being swept by the Fort Madison in two doubleheaders during the regular season and finished behind the Southeast Conference champion Bloodhounds in the regular season.
"I was nervous, but you have to go in with the mentality that this is just another team and you've never seen them before," she  said.
"This will be our fifth time seeing them this year so we know who they are."
Whaley and Rehm both had two-hit nights. Whaley accounted for 2 RBI and Rehm added two. Steffensmeier also had two hits in the win and scored two runs. Lauryn Helmick and McKenna Cashman had the other hits for Fort Madison.
Rehm's line in the circle was 11 strikeouts and just three walks on two hits and no runs.