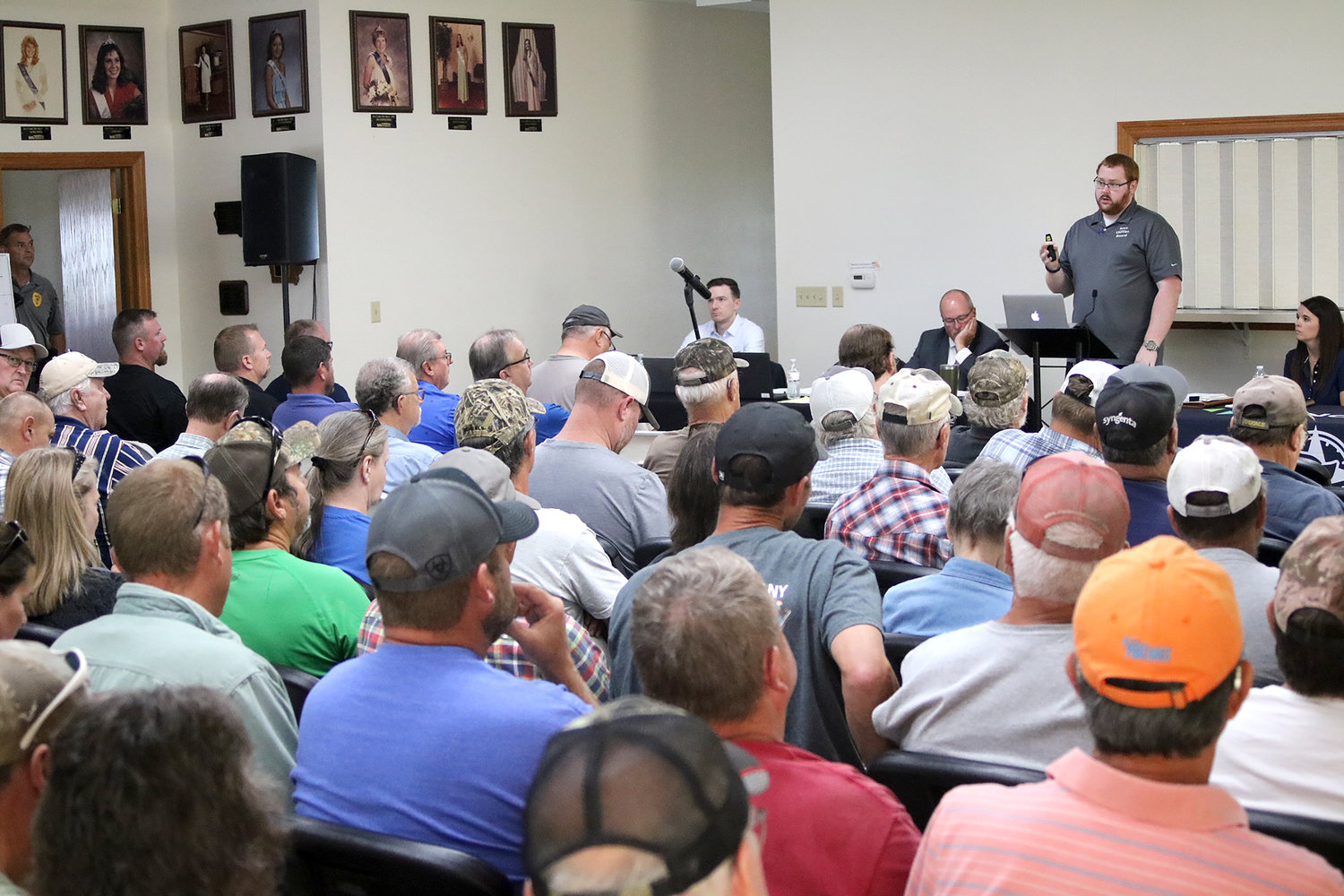 I'm appalled at how much this company downplays the dangers. You realize you're wanting to put a pipeline in our state that can kill people.”
Jessica Mazour, Sierra Club Iowa
Chuck Vandenberg, Pen City Current Editor

FORT MADISON - Opponents of a 1,300-mile carbon dioxide sequestration pipeline planned to run through Lee County got another chance to fire away at pipeline and state officials Thursday afternoon.

Representatives from the Iowa Utility Board and Heartland-Greenway met with landowners, public officials, and reporters regarding the proposed pipeline that will run more than 800 miles in Iowa alone.

Just under 100 people piled into the Lee County Fairgrounds Youth Center in Donnellson for the three-hour meeting.

The pipeline is projected to span 58.29 miles through the county with a split northwest of Donnellson off 190th Avenue. It will impact 95 land tracts along the route and 74 property owners.

Lee County Supervisor Garry Seyb told IUB officials Thursday to rely heavily on the risk-reward analysis of allowing the pipeline before making a decision on the pipeline company's permitting.

"We can read all we want into the record, say whatever we want, the county board can file all the letters we want," Seyb said.

"And the landowners can say we're not signing up for this, but the IUB ultimately can say yes or no, even theoretically if 100% of the landowners say no. I'm concerned that money, i.e. reward, and risks don't equal out here."

Jessica Mazour, a conservationist with Sierra Club Iowa chapter and a lifelong Iowa resident, took the IUB and Navigator to task for not giving proper weight to the risk of the pipeline.

"I'm appalled at how much this company downplays the dangers. You realize you're wanting to put a pipeline in our state that can kill people," Mazour said.

"Some of the people in this room could die and you don't care because you're going to make a lot of money off this."

Pipeline officials said they are doing everything they can to ensure the safety of the pipeline including working with geotechnic companies to evaluate subsurface conditions to find places that are more stable in the event of earthquakes and shifts that could potentially damage the line.

Dan Zigart, a journalist who first reported on the only CO2 capture pipeline to rupture in February of 2020, in Satartia, Miss., was also in attendance and spoke at length about what he saw in Mississippi.

"There was a crater 50 feet deep with frost on it where the carbon had frozen the land. People passed out and were barely breathing... This thing can kill people."

Company officials blamed the Satartia event on poor emergency crew communication and poor preparation on the part of the company responsible for that pipeline, Denbury Resources.

The pipelines carrying the pressured carbon in Lee County will be anywhere from 6 to 20 inches in diameter with incremental safety valves at strategic locations where flow can be shut off in the event of an emergency.

"It seems a lot of the owners impacted by Dakota Access are now impacted by this pipeline. That's what happens. Once they get in, the next company tries to do a project adjacent to a previous pipeline which creates a corridor," Mazour.

She told the group that they do not have to sign any letters for right of way or easements.

"This is truly not a public utility. All the other ones you could argue one way or another, but there's no spiggot for you to get your fair share of CO2 off this pipeline. We're just a pass through for a company to make a lot of money," Mazour said.

About 10 other landowners talked to the board about  the impact of the pipeline on the project.

This is the third time Navigator has held meetings in Lee County. The IUB required another meeting with the public because of changes to Navigator plans for the pipeline in the county.

Advocates for the CO2 sequestration say the service helps pull carbon emissions from the air, which can help with effects of global warming.

Lee County Supervisor Chuck Holmes said evidence shows that pulling the capture carbon dioxide from the air has very little to do with global warming.

"This sequestration enterprise reduces CO2 in the atmosphere by only .04%. An analogy could be made to purifying a gallon of water then dumping it in a lake. The net cleansing of that lake is essentially 0," Holmes said.

Holmes said it would take 25 projects of the same magnitude to reduce the CO2 content of the earth's atmosphere by just 1%.