Momentum fades in tiebreaker as HTC falls to BND 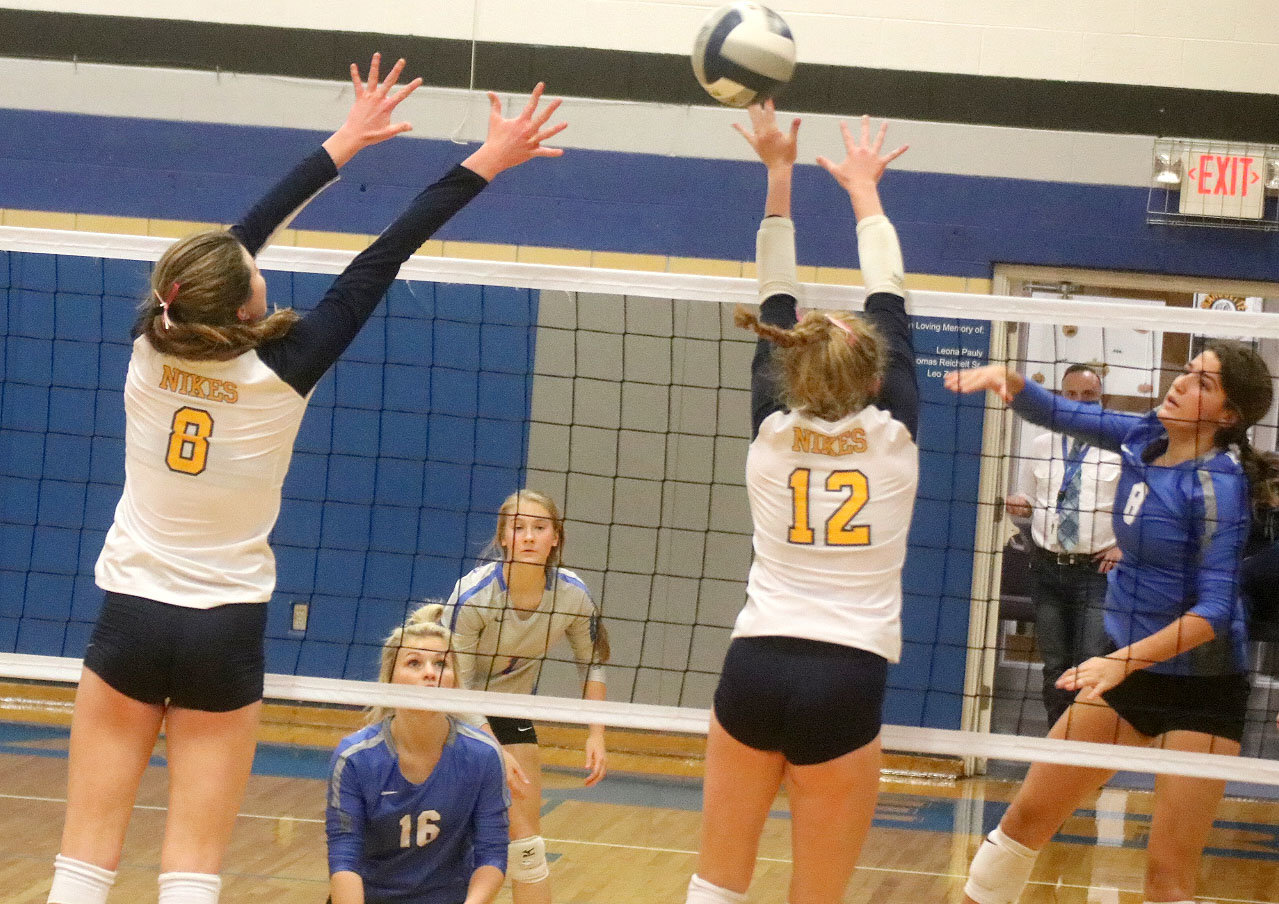 FORT MADISON - The end could have come quickly, quietly.
Instead, it was a noisy, frantic comeback that fell short.
Holy Trinity’s 10-year streak of making it to the state volleyball tournament ended on Monday night on the swings and blocks from an SEI Superconference South Division rival that has known all too well of what the Crusaders have done in the past.
Notre Dame’s 25-16, 25-14, 22-25, 23-25, 15-12 win in the Class 1A regional semifinal at Shottenkirk Gymnasium ended what Mike Davis called “the Holy Trinity curse,” that feeling teams got in the postseason when they ran into the Crusaders somewhere along the bracket.
Not that Davis, who shares head-coaching duties with Susan Reid, has had much experience with it.

“I tell you what — me and Susan, and there’s a couple of players who haven’t been here, we don’t know about this Holy Trinity curse,” Davis said. “I guess it’s out there. You could see in some of the returning players from last year, it started to creep in (during the third and fourth games).
“We told them, ‘We’re a good team. They’re a good team. Let’s just prove on the floor that we’re the better team.’ And I believe we did.”
The Nikes (16-5), ranked 14th in Class 1A, will play another South Division team, WACO (26-7), in Wednesday’s regional final at Mount Pleasant, with the winner going to the state tournament.
Holy Trinity, ranked No. 8, ended its season at 26-10, two victories away from another journey to the state tournament in Cedar Rapids.
"We started off slow in Games 1 and 2, and then we fought hard in 3 and 4, and we fought hard in 5,” Crusaders coach Melissa Freesmeier said.
She paused."Some things,” Freesmeier said, "didn’t go our way."
Holy Trinity was dominated early by the Nikes’ power up front. Gabby Deery’s kill to open the match set an early tone, as eight of Notre Dame’s first 11 points came on kills.

The Crusaders’ offensive attack was too quiet.
“We gave too many free balls,” Freesmeier said. “We let them run their offense. And we knew if they ran their offense, they would be good.”
The Nikes had plenty of options. Deery, Katy Stephens, Josie Bentz and Abby Korschgen all had kills in those first two games.
“We’re so balanced, from one to six out there, we can spread it around,” Davis said. “If we spread it around, good things are going to happen.”
It could have easily been a sweep for the Nikes, who led 8-2 to start the third game. But Holy Trinity took advantage of an error by the Nikes to score six of the next seven points, two on aces from Claire Pothitakis and three on kills from Brooke Mueller, Mary Kate Bendlage and Kassi Randolph.
“In Game 3, we had a nice little lead,” Davis said. “We go back there, shank a pass, point for Holy Trinity. Next thing you know they’re back in it at (8-6). You give them a spark, give them an inch, and they’ll be there the whole night. You cannot give these guys anything.”
“It was like, ‘Hey, we worked on this. You know what they’re going to do. Now let’s get some hands in the face. Let’s go after them,’” Freesmeier said. “You have to go after them, stay aggressive.
“We just had to settle in. It took them a while. But it was pure grit after that. Our kids did what we had been working on.”
Holy Trinity took its first lead of the night at 15-14 on a kill by Pothitakis, and then the Crusaders closed out the game.
That momentum carried into the fourth game, when Holy Trinity built an 18-10 lead. But the Nikes worked their way into a 22-all tie, coming up with three consecutive blocks on Pothitakis kill attempts. Holy Trinity would win the game on a Mueller block, but Notre Dame felt good about the finish.
“Holy Trinity, in Game 3, they started swinging lights out,” Davis said. “They were getting a lot of points off our blocks, and in the holes in our defense. I think we adjusted a little bit, started lining it up a little better, and started getting stuff blocks. Once you start stuff-blocking them, they’ve got to think about it a little more.”
Notre Dame’s defense controlled the net in the fifth game. The Nikes trailed 9-5 before a five-point run that included two blocks from Stephens, one from Deery and one from Jenna Bentz.
Josie Bentz closed the night with a tip for a point, and then back-to-back kills.
The Crusaders’ run was over.
Holy Trinity loses five seniors — Pothitakis, Maria Rauenbuehler, Taylor Crabtree, Katie Denning and Bailey Hellweg.
“It hurts every year when you don’t get (to the state tournament),” Freesmeier said. “Of course you feel bad for your seniors. They don’t get another chance. The young kids can learn and move on. But the seniors don’t.
“It’s still been a good year, even though we don’t get to where we want, that we’re a few points away. We’ll just have to regroup, and come back next year.”