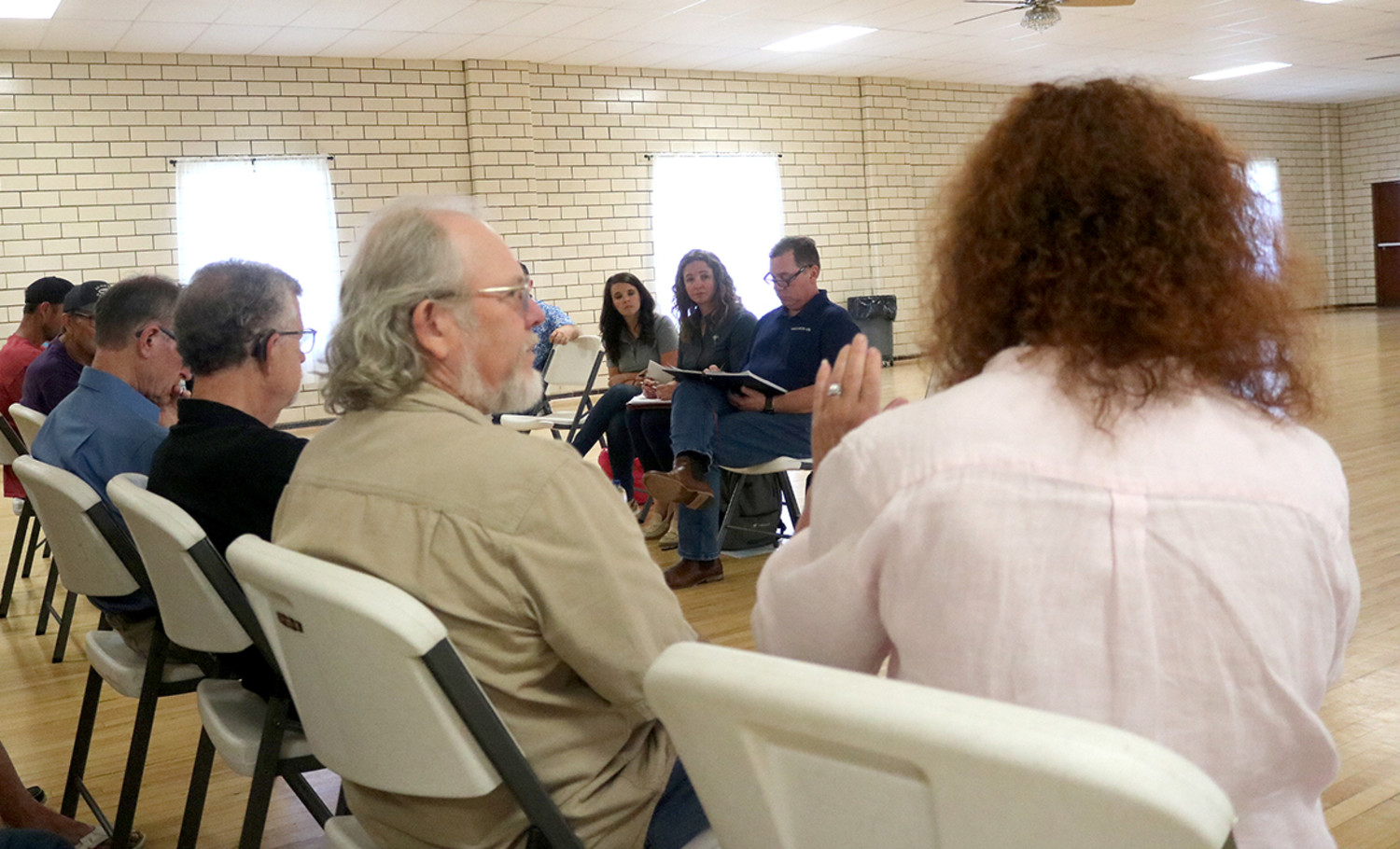 WEST POINT - A meeting with Lee County Supervisors and about 25 other property owners turned a CO2 capture pipeline company toward the safety of the proposed project.

At the American Legion building in West Point, all five supervisors, including two candidates in the upcoming general election, listened in as Monica Howard, Navigator CO2 Ventures' Senior Director of Environmental and Regulatory, and Chris Brown, VP of Capital Projects, sat in white folding chairs in front of the crowd to espouse on the safety of the carbon capture pipeline currently in front of the Iowa Utilities Board.

Brown referenced an eruption that occurred in Sartitia, Mississippi in 2020 and pointed the blame of the following sickness and hospitalizations to the operator's, Denbury, Inc., failure to appropriately prepare the community with both environmental and safety information.

"The operator didn't perform a geo-hazard study on their system. Navigator will be performing a geo-hazard analysis of the entire system," Brown said.

He said its very important for Navigator to maintain continuous and non-continuous leak detection protocols.

Continuous detection consists of overall pressure analysis on the system at every mainline valve through pressure transmitters on both side of the valve, which goes to the company's supervisory control system.

He said there are also systems to determine what's coming into the pipeline and what's going out of the pipeline.

He said the company also uses a fiber optic leak detection system that will be installed in the same ditch as the pipeline and it has the capability of detecting any type of encroachment on the pipeline system, including excavation near the line.

The company will also be burying the pipeline 2 feet further than PHMSA (Pipeline Hazardous Materials Safety Administration) regulations require. The regulations required a minimum depth of three feet. Brown said warning tape will be installed at the 3 foot mark to warn anyone digging or excavating of the presence of the pipeline.

Brown said in a perfect world everyone would call 8-1-1- before digging in Iowa, but he knows that's not the reality.

Howard said the pipeline would operate between 1,300 and 2,100 psi of pressure, with PHMSA requirements setting the max pressure at 2,200 psi. She said Navigator will be exceeding that by testing the pipeline at 2,700 psi for at least eight hours to detect any possible leaks before any hazardous materials are accepted into the line.

In addition, she said the pipeline walls will also exceed industry standard and will be even thicker near road crossings and other publicly used facilities.

Despite the reassurances from the pipeline officials, some property owners were still not swayed in their opposition to the project.

Ray Menke of Fort Madison said he had been opposed to the pipeline, which will cross his property, from the outset.

"But after hearing what you've said today, the only way you're getting that across my land is through eminent domain," he said.

Ted Stein, and his wife Carrelle, who've logged several objections and communications about the project on the IUB docket, both spoke in opposition.

Ted Stein questioned the chemical makeup of the hazardous materials moving through the pipeline to possibly include hydrogen sulfide, which is a toxic chemical event at 20 parts per million.

Brown said the byproduct of the fertilizer plants is 97% pure carbon dioxide, or CO2. Stein pushed, saying that the remaining 3 percent could carry enough toxic chemicals to sicken those around a rupture, similar to the Sartitia incident that sickened 49 people.

Supervisor Ron Fedler said this pipeline proposal is more emotional than the other projects that have come through the county. The county has hired an inspector to monitor landowners' rights and work being done in the county, at Navigator's expense.

Fedler is also from West Point and said that the community is concerned about the proximity to the city's north side and a chilling effect the pipeline could have on future development there.

Carrelle Stein, who's a retired attorney, filed a motion to intervene in the IUB hearings. She said the company has a long way to go to prove this project is for the public good. Iowa code requires a public good component in eminent domain cases. Pipeline companies argue the capturing of carbon is critical to combat greenhouse effects of global warming, but opponents argue the the carbon is being used elsewhere, and other alternatives are just as effective.

Some even argue that the captured carbon will be a hindrance to the natural exchange of oxygen through plant life.

"You guys got a lot to do to satisfy me and these people here," she said. "People are coming to take property and it's not going to happen. We'll take it all the way to the Supreme Court."

The Navigator Heartland Greenway CO2 pipeline is being proposed to run diagonally northwest to southeast through Iowa for a total of 810 miles, including more than 50 miles of pipeline buried in Lee County. The entire pipeline would run approximately 1,300 miles through five states.

Heartland Greenway has said the pipeline has the capability of capturing and storing up to 15 million metric tons of CO2 per year, equivalent to about 3.2 million vehicles annually.

The pipeline would range in width from 6 to 24 inches in diameter and would run with a potential 2,200 pounds per square inch (psi) of pressure.