Fort Madison heads to No. 8 Marion on Friday for Substate 5 semis 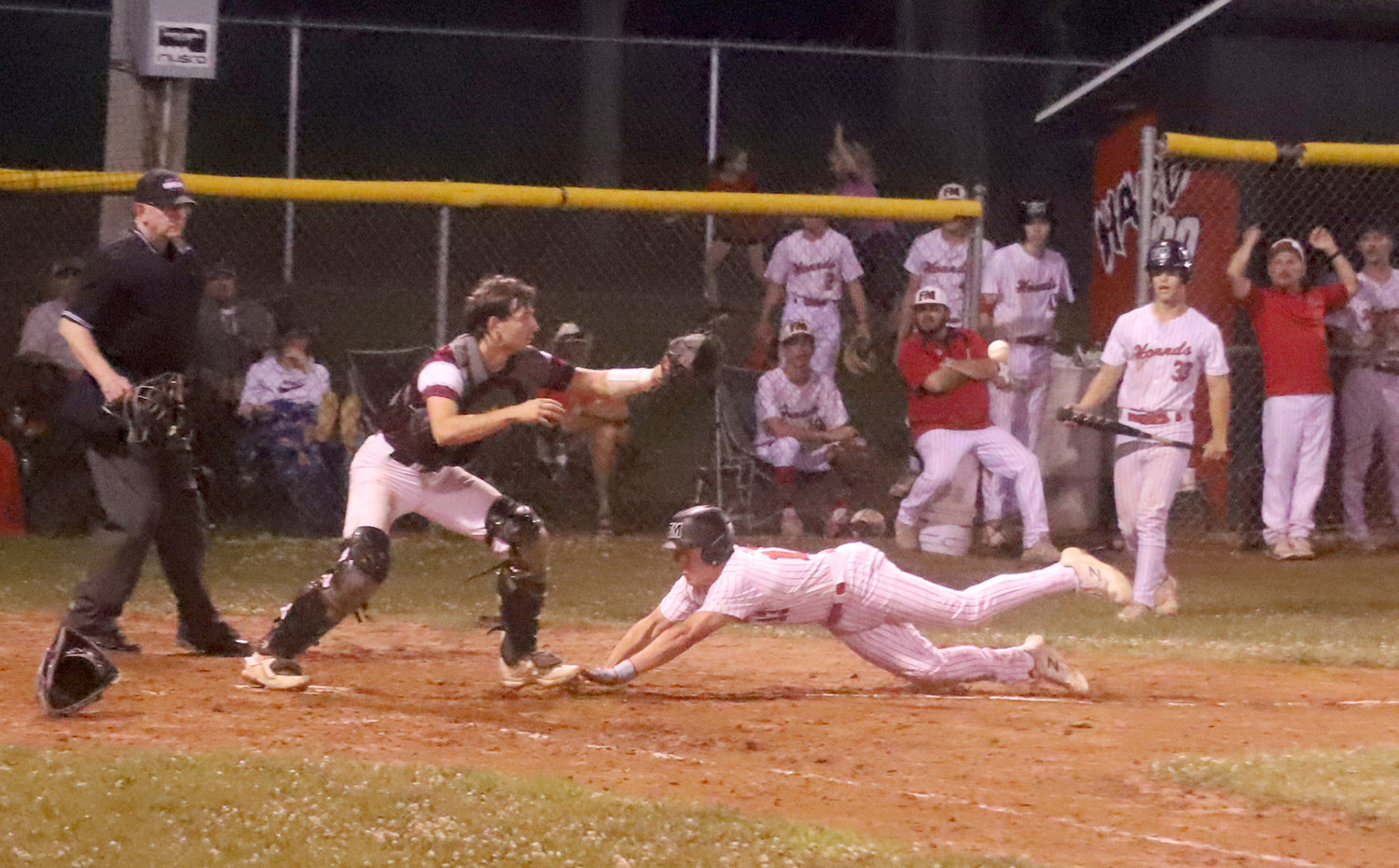 Fort Madison senior Tate Johnson gets horizontal on a squeeze in the bottom of the sixth inning as the ball comes in off a flip from Oskaloosa pitcher Garrett Roethler to catcher Charlie North. Johnson would get in under the tag as the bench reacts behind him.
Photo by Chuck Vandenberg/PCC
Posted Saturday, July 9, 2022 11:09 am 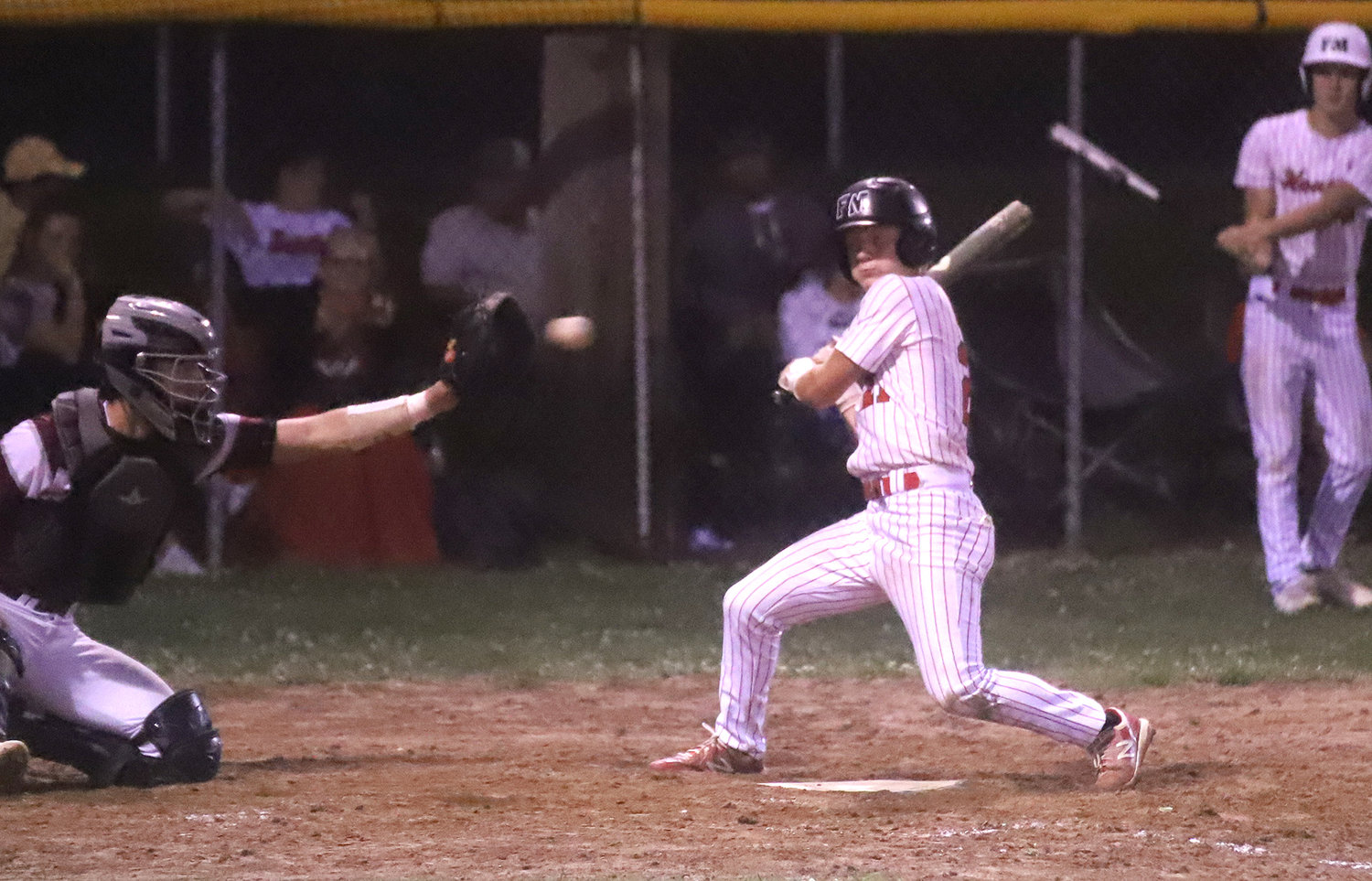 Kane Williams moves away from an inside high fastball in the fifth inning of Friday's 10-5 win over Oskaloosa. Williams got the win on the mound as the Hounds advanced in Substate 5 Class 3A play.
Photo by Chuck Vandenberg/PCC

Williams on the Hounds' win

I'm fine with the runs and that. If we win it's a team win. This isn't about me. It's about us moving on”
Bloodhound junior Kane Williams
HOUNDS ADVANCE

Fort Madison will play Monday at 7 p.m. against No. 8 Marion at Mt. Mercy College. Click the link in the story to purchase tickets.

FORT MADISON - A quick start and strong finish helped move Fort Madison to the Substate 5 semifinals Friday night in Fort Madison.
The Hounds scored three in the first and finished with five runs combined in the fifth and sixth to put away Oskaloosa 10-5.
Kane Williams went the distance getting the win. The junior gave up 10 hits and struck out four, while walking three and allowing three earned runs.
Tate Johnson and Reiburn Turnbull led Fort Madison at the plate. Johnson was 2-3 with a triple, 2 RBI and three runs scored. Turnbull was 2-4 with an RBI and two runs scored.
Johnson' sixth inning two-run triple just missed going out to the deepest part of the field at 356 feet banging off the Hy-Vee sponsor board in left-center. Two pitches after that he slid head first into home on a squeeze bunt by Jordan Simpson to give Fort Madison a five-run cushion.
Johnson has been heating up of late with six hits in his last four games.
"I think it's just more swings. I really didn't get a lot of swings before the season so I'm just getting in the groove of it," Johnson said.
Head Coach Ron Walker said the seniors showed heavy leadership helping get the field ready after a day of rain and then dealing with a half-hour delay in the start.
"I told the team out here, the leadership they showed today was the best I've seen all year hands down and it was contagious," he said.
"Landes and Tate were out helping us with Quick Dry, doing what they could to get the field ready. That's true leadership which was nice to see on their last night going out here."
Fort Madison opened the scoring in the first when Landes and Kane Williams both drew walks and Turnbull singled through short scoring Landes Williams. It was Turnbull's 16th RBI on the year which is tied with Kane Williams for best on the team. Johnson is one behind at 15.
After a Johnson strikeout, Simpson put down his first bunt of the night to bring Williams to the plate and then Tanner Settles singled  to left scoring Turnbull for a 3-0 lead.
Oskaloose would get one back in top of the second when Aiden North singled scoring Landon Briggs, who doubled in the previous at bat.
Landes Williams got his brother out of the jam handling a ground out at short to end the inning.
Fort Madison would add a run in the third on a Matt Hopper RBI single to left. Simpson would get caught at home to end the inning. The Indians would answer with a run in the top of the fourth to make it 4-2, but the Bloodhounds would get it back in the bottom half when Caden Barnes singled to right and advanced on an error on the play.  Courtesy runner Brody Cashman would come around and score on another Oskaloosa error.
Williams gave up a couple singles with one out in the top of the fifth, but worked out of trouble with a fly out and strike out. Johnson would score again in the bottom of the fifth on Settles RBI single to left for a 7-2 lead.
Oskaloose would rally in the top of the sixth with three runs. Williams gave up a single and double to open the frame, prompting a visit from Walker. Briggs then hit a grounder to short that scored a run and North followed with an RBI single to left-center to make it 7-4. Colin Snitker would hit into a fielder's choice with one out to score the Indian's final run of the game, while Fort Madison tacked on its three insurance runs in the bottom half to get the win.
Kane Williams said he didn't focus on the runs or hits allowed, but the result.
"I'm fine with the runs and that. If we win it's a team win. This isn't about me. It's about us moving on," he said.
Williams, who threw 107 pitches in the win won't be eligible to pitch again Monday, but will likely be near the top of the lineup and patrolling the infield.
Walker said he wanted to get runners on and take advantage of Oskaloosa's 99 errors on the year.
"Our main focus was making sure we competed in the box and put the ball in play. We haven't played in eight days, and they had 99 errors on the season, so we wanted to put the ball in play and get hard 90s and create our own tempo," he said.
"We ran into a couple outs, but for the most part we were able steal a few runs."
Settles and Matt Hopper each had two-hit nights with Settles driving in a couple runs.  Simpson and Barnes had the other hits for the Hounds.
With the win, Fort Madison will travel to last year's 3A state champion and current No. 8 Marion for a 7 p.m. game Monday at Mt. Mercy College. Tickets can be purchased at www.iahsaa.org/tickets/
"We're gonna have to come to play. I know they're a good team so we're going to have make plays and take care of business," Williams said.
Johnson said he's looking for the upset on Monday night.
"We know they're a great team so we'll have to go up there and just try to do what Central DeWitt did to us last year."
Walker said Marion has been a little banged up but their getting healthier and play in a tough area.
"They're the returning state champs and basically ran through the tournament last year and they've got a couple big school commits. So we'll have to play clean baseball and make things happen," he said.