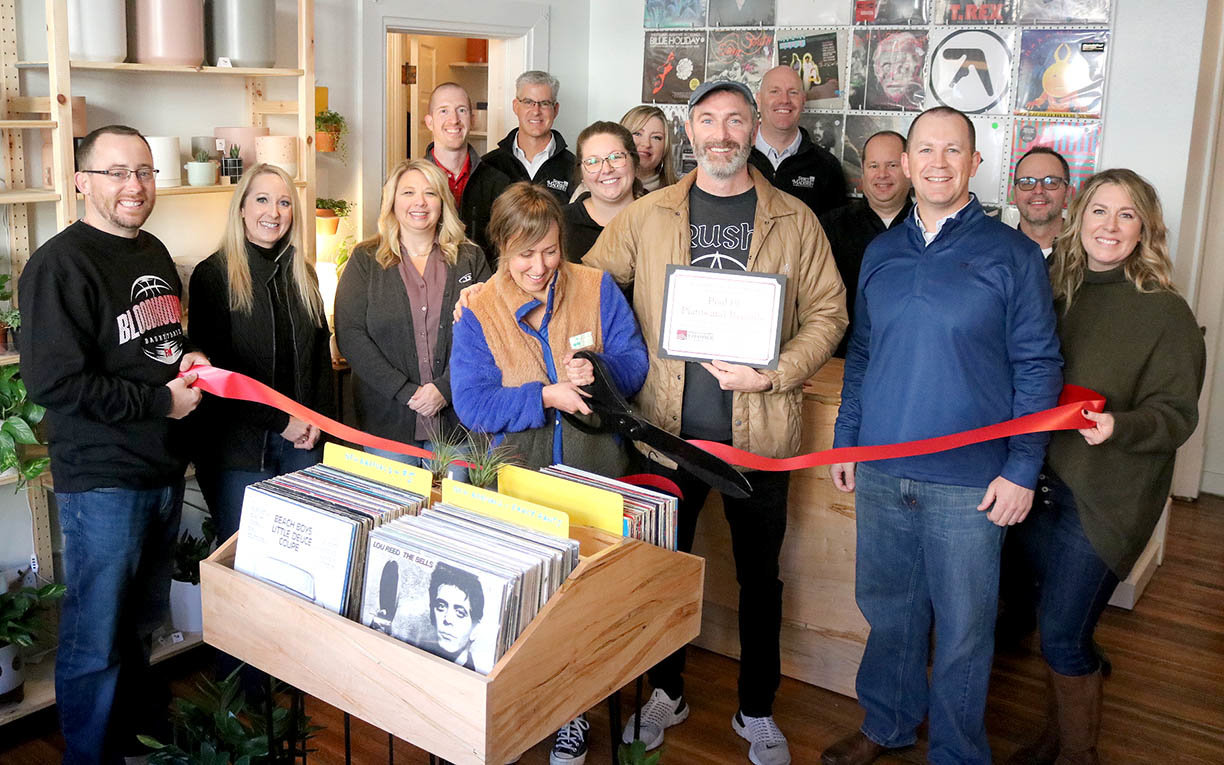 The Fort Madison Chamber of Commerce hosted a ribbon cutting at Pool 19 Plants and Records Friday morning in downtown Fort Madison. The store is in the Hesse Building at 616 7th Street and is open from 11 a.m. to 6 p.m. Wednesday through Saturday. Photo by Chuck Vandenberg/PCC
Posted Sunday, December 5, 2021 2:32 pm

FORT MADISON - A couple seasoned in global commerce are finding a very comfortable place in a small shop in Fort Madison.

Mike and Allison (Pickard) Park opened Pool 19 Plants and Records in August and are enjoying the resurgence of the retail feel in downtown Fort Madison.

The two opened the store in the Hesse Building which also houses Corks and Barrels, and Harvestville Farm Mercantile and have developed a following in just four months. But co-owner Mike Park said some people still come in not knowing they are there.

"We're still finding people who have come in saying they live two blocks away and didn't know we were here," Park said.

Park is former news consultant with Twitter and Allison has had national success in marketing campaigns while working on the east and west coasts, and living in Japan.

"We've lived in Japan, San Francisco, and New York City," Park said. "During the pandemic, and our story is not unique, it's shaken up a lot of different people. We have a 1,000 square foot apartment in Brooklyn, New York. I was doing work from home, my son was doing school from home, and we were on just on top of each other."

He said Allison's parents wanted to move out of their larger home and the timing worked well for the two to move back to Fort Madison into the home.

Allison's father Jerry was an English teacher at Fort Madison High School for 35 years and Mike said the shop has been effective at rekindling memories of Allison's childhood.

"That's the other part that's kinda been nice, and I would be remiss if I didn't mention Allison's dad passing. He was a fixture, a ninth grade teacher for 35 years here. What the store has become - and it's not just about selling plants and records because we'll be the first to tell you we're not going to retire selling this stuff - but it's about speaking with people," Mike said.

"People are coming in now and saying, 'I had her dad in 9th grade and he made me do XYZ', and I'm learning about what and who my father-in-law used to be. The store is helping with that."

The store is open from 11 a.m. to 6 p.m. Wednesday through Saturday and sells used record albums, potted plants, and some accessories and turntables.

Park said the market for vinyl records is higher than it's been in the past three decades with some people actually buying up records for the collection value.

"Some people are coming in here and buying records and they don't even have a turntable," he said.

"But if you look at the market, it's growing faster than any other music format. Believe it or not, tapes are making a comeback, too."

The two observed the increase in retail presence in the downtown area with outlets like Swed Coffee.

"We nibbled at it. Our son did the logo. I started buying records and Allison found people to buy pots and plants from. We found a local person to make the furniture in here," he said.

"We saw what the Sweds were doing and said, "Wow, there's something happening here and it feels kinda good."

Connection adds spark to Light Up the Sky