We must choose to be informed - Beside the Point 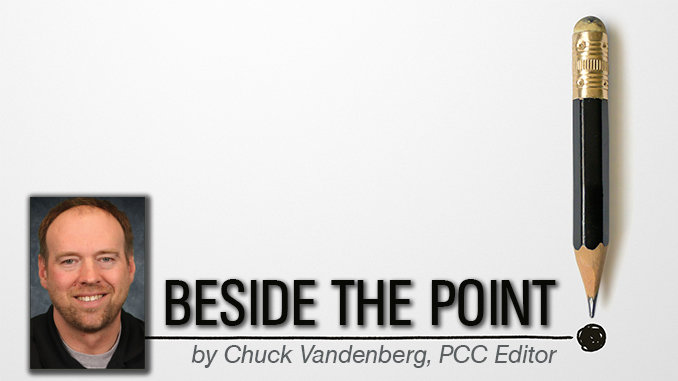 Fort Madison at-large City Councilman Kevin Rink said at Tuesday's council meeting that he's been fielding calls from people who don't have the Internet, and don't get the newspaper.

They're concerned they're not getting enough information about what's happening in their city.

Sitting in my chair, socially distanced in City Hall, I looked around the room for a reaction to that comment. I didn't see much, but there were a few tilted heads and some low murmuring.

I wanted to get out of my chair and jump up and down. But we journalists are taught to not become part of the news, so I just flopped my hands palms up on my outstretched legs. WTH?

These same people must be opening their cupboards on Sunday morning to stocked shelves, then stomp into the living, plop down in the easy chair with folded arms... because there's nothing to eat.

There is no time in history when staying engaged and informed has been more important. We're facing a pandemic and a worldwide effort to get it under control. That story is fluid and changes daily, if not hourly.

And we're suffering a different kind of social flu. The kind that results in the people of one nation turning against one another physically in what is nothing more than a political debate spanning centuries.

But now, for some reason, we just think we can ignore the result and terrorize the institution.

Get informed of that! But where? What to trust? On a national scale, I can't be that voice of reason. Anymore I just stick with the national brands, CBS/ABC/NBC. These are the organizations that are at least still fighting to be as objective as possible.

Any cable news network is runnin' to the money. True news can't care about the money. That's an extremely tough row to hoe and needs to be appreciated.

But there is really no excuse for not knowing what's happening locally. There are two viable new agencies in this town and a couple television crews that have been hanging out lately.

Regressive exchanges of information via social media are a weight around our ankles. I stopped to talk to my neighbors about the marina because I heard one say something about dredging. They were boat enthusiasts who said they've been reading about the marina. They were excited... and they were very informed.

We're still seeing people post they want the city to build new schools rather than the proposed 5-star marina.

Wealthier towns with high property valuations have nicer schools. But it's from money culled from the tax base through school district property tax structures, and state education funding formulas - certainly not the decisions of city officials, and certainly not city funds.

That conversation has to stop.

People still complain about the city using waste water treatment interest reimbursements on new parking lots. That's because those lots are built with permeable pavers that allow storm water to run through the surface, and into the ground reducing the amount that goes back into the storm sewer system. That money had to be spent on storm water remediation.

You probably could have replaced three blocks of a street, but it had to focus on storm water mitigation. You couldn't use it to repair Avenue F, or build a bowling alley. And that conversation has to stop.

Not knowing what's happening in your neighborhood and at your City Hall is on you.

Let's talk the south side parking ban on Avenue E. It's unbelievable how many people were upset they didn't know anything about it. PCC only wrote on that issue about 10 times. You weren't looking. It was in the Democrat both editorially and legally. You weren't looking.

The state mandates that municipalities inform people through public notices because throughout time it has been the "best" way to reach all the people. Read public notices in Pen City Current to see how much the city spends on public notices in the paper of record. Now that's good reading.

We run them for free. And that day is coming when all the city will have to do is post it on a dedicated site where everyone can check daily for new information.

The Internet already is akin to a utility and eventually that's where municipalities will publish notices legally. Right now they are still required by law to be posted in newspapers. Pen City Current is not the paper of record, because we don't use the postal service for our products. Feel free to connect dots.

The push back is that local newspapers, which are critical to a functioning society, stand to lose millions across just this state alone, when public notices are no longer required to be published.

I see a day when the city's website has a Public Notices link and everyone with the Internet can check them 24/7 (which you can do at www.pencitycurrent.com now). It's certainly more efficient, especially if the Internet is truly a utility that everyone will have access too. The move will possibly result in a few more streets getting repaired, or city debt retired quicker, or lower property taxes.

Elderly having trouble functioning in this geekie world is understandable. I hate it when Facebook changes abruptly, or our host site updates and things change. I get it.

But there are resources out there. Governor Kim Reynolds said last week that she's reaching out to the state's agencies on aging to help those who don't have access to the Internet stay informed about COVID vaccines. Those agencies can also help you stay connected to your communities.

I think one of the biggest weapons we have in the fight to keep our community viable is information. Those that don't have it, choose not to follow it, or just ignore it, are a weight on the progress.

You're literally choosing to ignore daily options to stay informed, and then complaining that you weren't informed. It's the biggest dichotomy of a socialized world - those that choose to be informed and those who complain that they aren't.

Get a paper, get a laptop, hell, get a friend and have an eight-cent cup of coffee at your kitchen table. Get to living - and get to knowing.

Take a breath and commit to at least being open minded to the good things that are happening right now in your community.

Speaking of good things, the Governor is making national news by relaxing all restrictions for masking in the state with COVID numbers declining. It is a good thing that businesses can open fully again. We need to get back to life, but proceed with caution.

You'll still see me behind a kn95 and a sunflower - not just for me, but for you, too... but that's Beside the Point.

Chuck Vandenberg is editor/co-owner at Pen City Current and can be reached at editor@pencitycurrent.com