Three-ways gear Hounds up for 4A district play 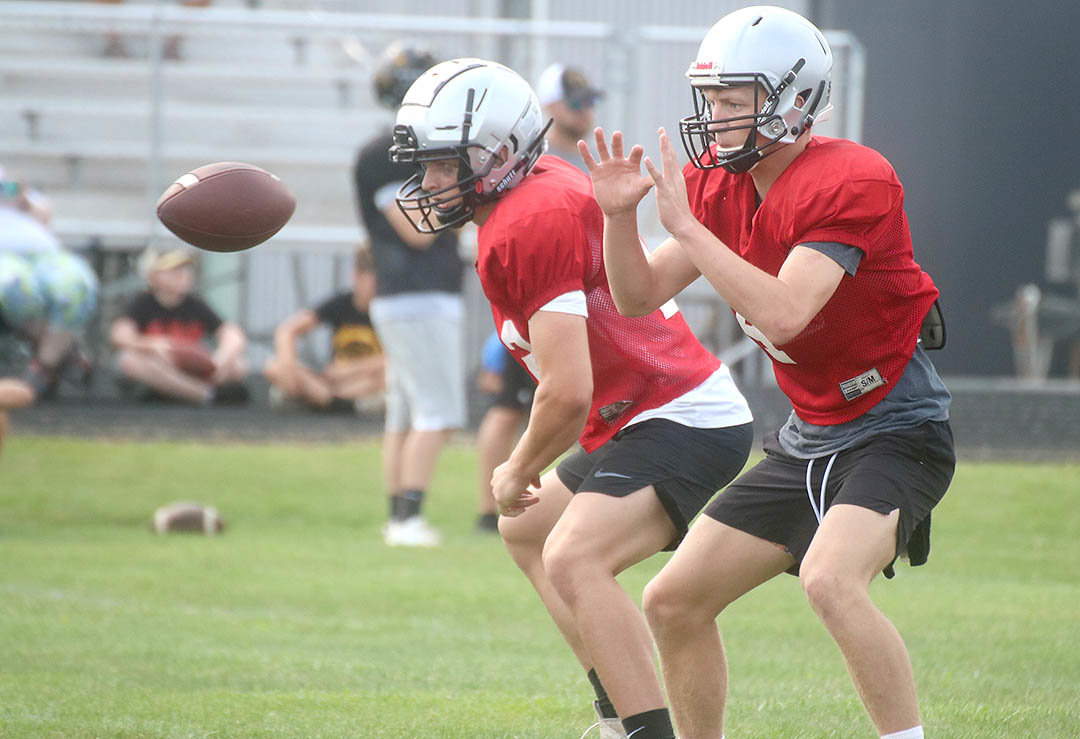 DONNELLSON - As usual, it's next man in as the fall football season rolls up on the Fort Madison Bloodhounds.

The Hounds got a light test of what the fall season, which officially kicks off Monday, will look like this year when they matched up with Panorama and Central Lee in a couple of preseason workouts Wednesday and Thursday.

Wednesday's drills were conducted on Fort Madison's practice field, while Thursday's action moved to Donnellson on the Hawks' home field with a couple of coaches from Culver Stockton in attendance.

"This is awesome because we get a look right away," said FM head coach Derek Doherty Thursday after the workout."

"You're usually staring at your teammates for several weeks in a row and you get tired of each other. But it was great to see different schemes and different guys, different skill sets - this was awesome."

The pandemic kept preseason workouts to a minimum last year so the preseason drills were an eye-opener for both the Hounds and Central Lee.

Fort Madison is coming off a playoff season in 2020 where they went 8-1 during the regular season before being shut out 35-0 in the second round of the Class 3A playoffs by Grinnell. Last year each team qualified because of the impact of the pandemic on the state. The Hounds beat Knoxville 45-7 in the opening round. The only other loss came at the hands of Washington 27-9.

Fort Madison was led offensively by Landes Williams, playing as a sophomore last year who took over signal calling in the third game.

Williams went to score 21 touchdowns, nine on the ground, to lead the Hounds' attack. Fort Madison will lose some offensive and special teams impact to graduation. All-state returner Brock Califf and linebacker Keaton Poe both played their senior years in 2020. The Hounds also lost the flexibility of Will Larson on offense, and Ethan Deacon and Bryce Britton anchoring the offense and defensive lines, and Levi Lowner at linebacker.

But Doherty, now in his third year at the helm in Fort Madison, has always had the philosophy of next man up.

"That's part of the fun and frustrating part of high school is you do graduate guys and it's next man in. If they're living right and doing the right things they'll be ready. We're proud of our guys for getting ready."

Some of those next men in include Teague Smith at linebacker and running back, soccer-standout Xander Wellman, Ike Thacher, Mikey DiPrima, and Kane Williams among others.

"Xander has been a pleasant surprise," Doherty said. "I told his dad two years ago, he's got really sweet hands for a soccer player. And he does."

Wellman will also handle the kicking and punting for the Hounds, which makes a little more sense. As a sophomore, Wellman was five of eight on field goals with a long of 37 yards and converted 34 of 37 extra points.

The core of the offense will center around Williams, who's favorite toy outside will once again be senior Tate Johnson. Johnson had 306 yards receiving last year and seven touchdowns through the air. He also had a fumble recovery for a touchdown and an interception for a touchdown. Johnson was a highlight reel of sorts last year with several diving grabs. He had another Thursday on a 40-yard strike down the right sideline.

Jakob McGowan and Smith should be a solid one-two punch out of the backfield, but Doherty and offensive coordinator Justin Menke aren't shy about mixing things up, or just letting the durable Williams eat up yardage on keepers.

Doherty said that core group on offense, and a defense that will be led by senior Austin Ensminger at linebacker and junior Tanner Settles coming off the end, are kids that want to be good football players.

"They put in the time and they want to be good. I think that's a huge thing. They aren't wishing or thinking it would be cool to be good - they really want to, and they're working for it and it's showing."

Menke said having Williams and Johnson back are huge for an offense that he said isn't a simple one. But it's the guys that the coaching staff is looking at to step and have an impact that will help set the tone for the year.

"Obviously having Landes and Tate back is huge, but we expect guys like Xander Wellman to take a huge step forward. Having Gavin Wiseman back also helps fill holes for people like Brock and Will who graduated," Menke said.

The Hounds will be playing in Class 4A this year due to a shuffling of classes and districts executed by the Iowa High School Athletic Association after the 2020 season.

The Class 4A District 3 season kicks off Aug. 27 with a rare season opener with Keokuk. The Hounds will get them at home for the third straight year. Then Fort Madison takes a short trip to West Burlington for a matchup with the Falcons.

The rest of the schedule is at home with Fairfield, on the road at Washington and Mt. Pleasant, back at home for Clinton and Iowa City Liberty, and then on the road at North Scott before finishing up the regular season at Burlington.