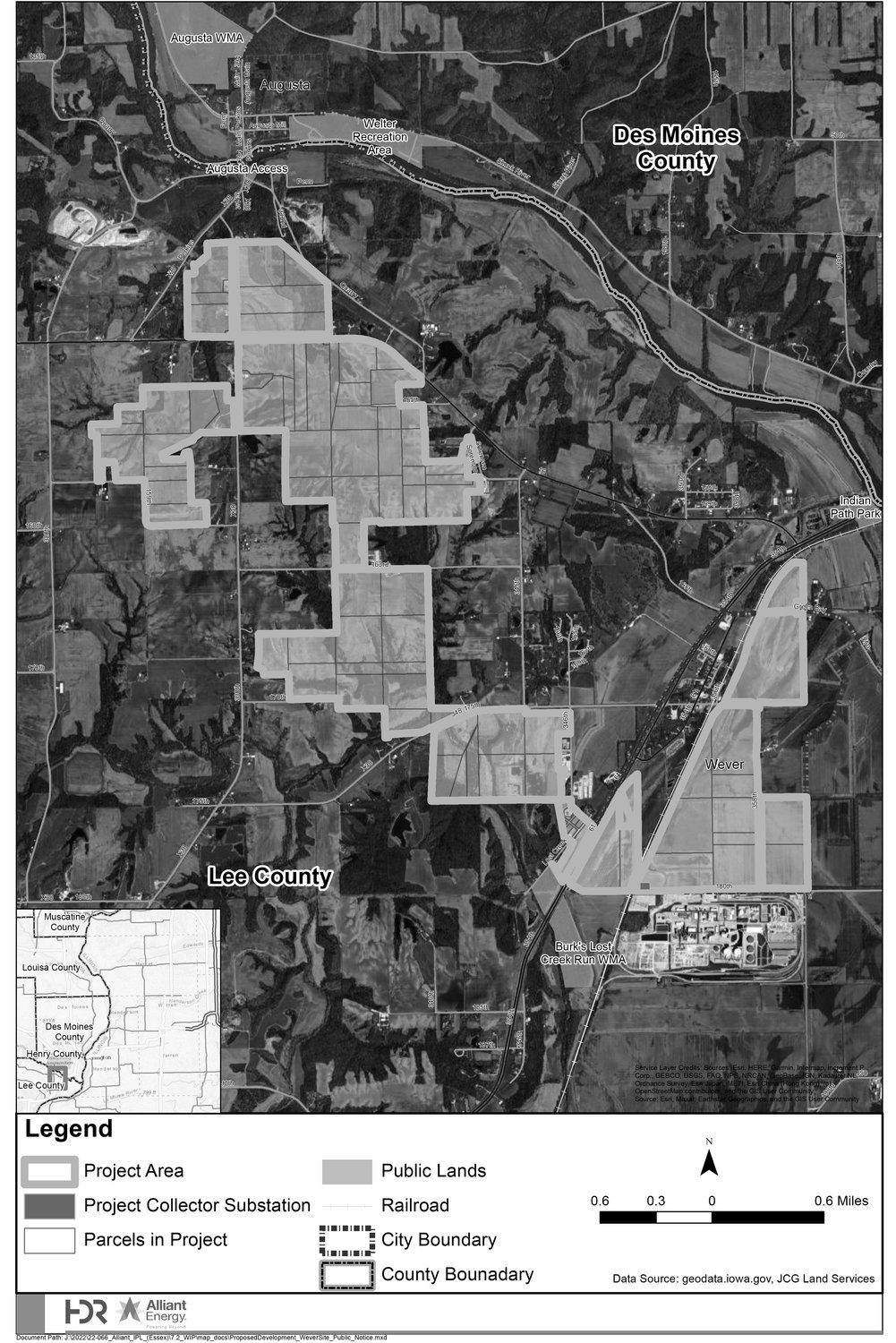 The shaded areas on the map show where a 900 acre Alliant Energy solar field is being planned for Lee County. Not all the shaded areas are for panels, as some represent areas where cabling will be required. The project was made public today, but has been in the works more than a year
image courtesy of Alliant Energy
Posted Monday, September 12, 2022 1:05 pm

Solar project in the works

We've been developing this for a long time and while we still haven't formally made a decision, we're going to include this as part of our clean energy blueprint, to be eligible we do need to move forward with this project”
Justin Foss, Renewable Energy Director - Alliant Energy
SOLAR FIELD

Alliant is planning a 900-acre solar field in Lee County north and northwest of the Iowa Fertilizer Plant, at an estimated investment according to officials of "a couple hundred million" dollars.

Alliant officials met with Lee County Supervisors at the board's regular meeting Monday to outline the project, which has been in the works for quite a while.

Justin Foss, Renewable Energy Director with Alliant Energy said the company is now ready to make the project publicly known and start working with the county on the necessary agreements.

"We are moving toward starting construction on this project with your  blessing and the blessing of the Iowa Utility board as well," Foss said.

Two years ago Alliant made an announcement that they were embarking a clean energy blueprint, which involved retiring some coal-fired facilities and adding more renewable power generation for Iowa customers.

Shortly after that they decided to add 400 megawatts of solar and 75 megawatts of battery energy storage to support energy resiliancy in the state.

"And we are currently in negotiations to add 75 megawatts of storage in that area, but haven't made that final decision.

"We've been developing this for a long time, and while we still haven't formally made a decision to include this as part of our clean energy blueprint, to be eligible, we do need to move forward with this project."

He said Alliant has started woring with Lee County Attorney Ross Braden and Lee County Engineer Ben Hull on a development agreement to execute with the county to set expectations for both parties.

Foss said Alliant has already come to agreements with 12 and 24 landowners for right of way for the project which will encompass 900 acres total.

A public hearing on the project is set for Sept. 27 at 6 p.m. in Fort Madison at a location to be determined.

Supervisor Chairman Matt Pflug, said he and Supervisor Ron Fedler have been meeting with Foss said there is no eminent domain involved and all the landowners are on board.

"I see this as a win-win for Lee County going forward," Pflug said.

The property for the site will be direcly north of the Iowa Fertilizer Plant and then northwest of the plant almost to the Augusta Access on the south side of the Skunk River.

Foss said there isn't much of a chance of any visibility or glare issues from the panels on Hwy. 61. He said the panels are designed to absorb light, but Alliant does do regular studies on those issues.

He said the energy produced will go onto Alliant's overall energy grid, like all the other facilities in the state.

He said there would be a benefit to IFC because there will be a shared substation the substation where the facility's collector substation is planned, on the northeast corner of 180th Street, which runs along the fertilizer plant's  north side, and Hwy. 61.