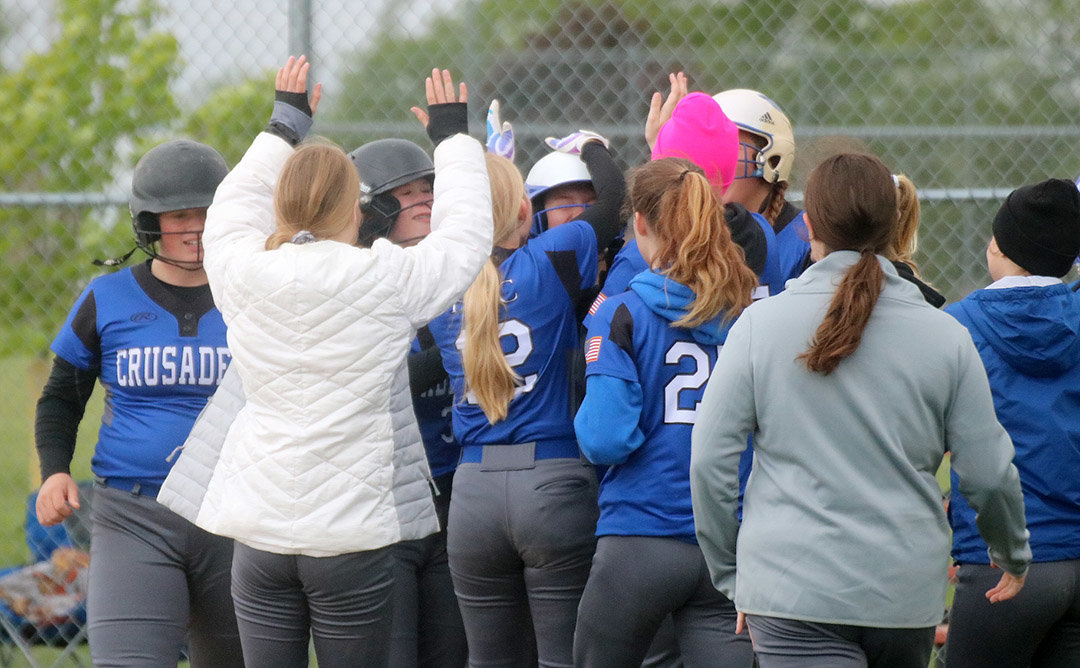 Holy Trinity sophomore Kayla Box gets high fives from teammates after a 3-run homer in the bottom of the first inning of the Crusaders 9-8 win over Danville Friday at South Park. Photo by Chuck Vandenberg/PCC
Posted Saturday, May 29, 2021 10:32 am

A ball that just slid under the glove of Danville catcher Carlea Beckman was the difference as HTC held on for 9-8 win to move to 2-1 on the year.

The drama came in the form of a 3-run homer that cleared the opposite field fence off the bat of sophomore Kayla Box in the bottom of the first inning.

Box was just a little late on a 2-out, 2-0 pitch with Brooke Mueller and Mary Hellige on, that was lifted high into the drizzly air and fell just in front of an SUV with the hatch open to give the Crusaders a 3-1 lead at the end of one.

Holy Trinity scored six of it's runs on the night with two outs. But the Crusaders almost ran themselves out of the potential winning run in the bottom of the 7th.

With Hellige reaching on an infield single and Box drawing a walk on eight pitches, Jenna DiPrima lined a grounder to third. Danville's Morgan Waste looked to 1st and then saw Hellige hold up to return to second despite being forced at 3rd on what would have been a close play anyway. Waste went back and tagged third for the force and tried to get DiPrima at 1st but the throw was late.

The throw allowed Box to move to third where she would score on the 0-1 passed ball for the win.

Head Coach Loren Menke said the Crusaders (2-1) allowed Danville back in the game with some sloppy defense in the middle innings.

"I've was happy through our first two games. We were doing almost everything right, but tonight we got a sloppy and didn't play as well," Menke said.

HTC racked up six errors including one in the top of the seventh that allowed the tying run to reach the plate with just one out. But Hellige would settle in and get Hayley Chase to fan. After a single to Beckman, Kylie Palmer popped out in foul territory down the right field line to send it to the bottom half, where HTC would get the win.

"We've got two wins now, which is double what we had last year, and we've played just three games so I'll take that," Menke said.

HTC put up a 3-spot in the second inning building a 6-1 lead before Danville would get back in it in the middle innings.

After Rachel Menke ground out to second and Teagan Snaadt lined out to third, Haile Cain and Anna Sobczak would draw walks. Cain would eventually score on a wild pitch before Mueller would drive a 1-1 offering from Danville's Haiden Molter into the gap in left-center scoring Sobczak. Hellige would follow that with a single to score Mueller who had also advanced on a wild pitch for a 6-1 lead.

Holy Trinity would give up four runs in the top of the third to let the Bears back into the game.

Hellige gave up a couple singles in the inning sandwiched around some fielding errors. Then Gracie Walker laced a two-out RBI triple to center to make it 6-4 before Hellige got a strike out to end the inning.

HTC would score two runs off wild pitches in the bottom of the fourth.

Danville would get one run in the 4th and 6th before tying it up in the 7th.

Hellige (2-1) went the distance again for Holy Trinity throwing 142 pitches on the night. She was tagged for eight runs, but only two were earned and scattered 12 hits. She struck out 11 and walked just one.

"She pitched very well late in the game and I think that showed a lot of maturity," Menke said.

Mueller, Hellige and DiPrima each had two hits. Haile Cain, Mueller, Box and Anna Sobczak all scored twice for HTC.

Beckman went 4-of-5 for the Bears and scored four runs. Ava Smith was tagged with the loss going just 1 1/3 innings. Danville falls to 0-2 with the loss.